’Logan’ has a dark, character-driven portrayal of Wolverine

’Logan’ has a dark, character-driven portrayal of Wolverine 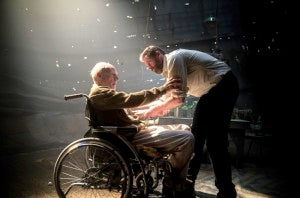 From director James Mangold comes the defining chapter in the cinematic saga of one of the greatest comic book heroes ever created. “Logan” sees Hugh Jackman reprise his iconic role as “The Wolverine“ for one final time in a raw, powerfully dramatic stand-alone story of sacrifice and redemption.

It’s 2029. Mutants are gone, or very nearly so. An isolated, despondent Logan is drinking his days away in a hideout on a remote stretch of the Mexican border, picking up petty cash as a driver for hire. His companions in exile are the outcast Caliban (Stephen Merchant) and an ailing Professor X (Patrick Stewart), whose singular mind is plagued by worsening seizures.

But Logan’s attempts to hide from the world and his legacy abruptly end when a mysterious woman appears with an urgent request, that Logan shepherd Laura (Dafne Keen), an extraordinary young girl, to safety. Soon, the claws come out as Logan must face off against dark forces and a villain from his own past on a live-or-die mission, one that will set the time-worn warrior on a path toward fulfilling his destiny.

Tasked with protecting Laura from the murderous cybernetic criminal Donald Pierce (Boyd Holbrook), Logan and ‘Professor X’ set out to cross hostile territory to ferry her to a place called Eden, where young mutants are said to enjoy safe haven. But Pierce and his fearsome army of cyborg Reavers are determined to return the girl to the custody of Dr. Zander Rice (Richard E. Grant), the sinister geneticist behind Alkali who triggered her mutations through a series of inhumane experiments in the hopes of creating a child super-soldier.

Rice is a sociopath who has no emotional understanding or feeling for the mutants that he creates. He sees human beings as something to be cloned. He’s very scientific and intellectual about everything. He has no real emotional involvement whatsoever. With ‘Wolverine’s’ tremendous physical abilities compromised by age and the passage of time, their relentless pursuit of the travelers takes a great and bloody toll. It’s often said that a film is often only as great as it’s villain.

‘Professor X’, who’s battling a debilitating illness that threatens to harm others as well. He’s old, he’s ill, but most importantly, he’s dangerous. His powers are out of control. He’s in peril. And the person who looks after him, mothers him, nurses him, supervises him, argues with him, picks him up off the floor when he’s fallen down is Logan.

The superhero aspect and the mutant powers are not the focus of attention as much as they’re in all of the other movies. You see the relationship as very sort of father-son in all it’s colors; pride, disappointment, anger, frustration. It all plays out. It’s a character-driven piece that would focus on Logan, ‘Professor X’ and Laura as they make their way across a barren landscape. The sense of people, of individuals, of relationships is stronger in “Logan” than it has been before.

Hugh Jackman first brought his electrifying energy to the mutant known as ‘Wolverine’ way back in 2000 in the film that launched the modern-day comic-book blockbuster, director Bryan Singer’s original ‘X-Men’. Since then, the Australian actor has slipped into the skin of the world’s most famous mutant a record 10 times on the big screen. But this time, with “Logan”, Jackman crafts something truly special as a mean of laying to rest his longtime screen alter ego. This film feels very different, very fresh and ultimately something very human, because it seems to that the strength of ‘X-Men’ and the strength of ‘Wolverine’ is more his humanity than his superpower.

This film is adapted from the landmark 1980 comic miniseries by Chris Claremont and Frank Miller and suffused with the spirit of Japanese noir and samurai films as well as American westerns. It carefully parses Logan’s inner tumult, rather than strictly rely on over-the-top action set-pieces for thrills. This is far more realistic than they’ve done before in the ‘X-Men franchise’, maybe any of the other comic book movies. Logan is a spiritual descendant of great western heroes like Clint Eastwood’s ‘Outlaw Josey Wales’ or Alan Ladd’s ‘Shane’.

It earns it’s R-rating, a first for any film in the ‘X-Men’ series. ‘Wolverine’ may be one of the darkest, most complex characters in the comic book universe. This is not a movie for nine-year-old children. When the movie is rated R, you suddenly are making a movie about more grown-up themes. You’re not under the pressure to make a movie for everybody. But there’s no question that the movie absolutely will speak to those longtime fans of ‘Wolverine’, those who’ve followed Jackman’s portrayal over the last 17 years.

There’s very little color in the film. The only time you’ll see color in the film is with the characters that don’t belong in their world; like the passengers that Logan; where the film uses warmer richer tones. In fact, it’s critical for Jackman, as he says farewell to his extensive ‘X-Man’ past. There’s an element of life and death about it that sounds dramatic, but that’s how it feels.