Filipino heat is back in Broadway ‘Miss Saigon’

Filipino heat is back in Broadway ‘Miss Saigon’ 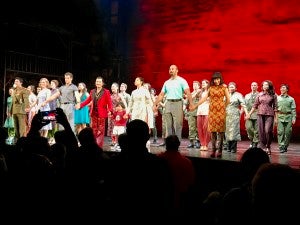 NEW YORK—Many theater lovers consider “Miss Saigon” as the greatest musical of all time. But for Filipinos, this Broadway hit will always be remembered as the one that made the Philippines famous through the unforgettable performance of Lea Salonga.

After 16 years, the epic love story of Chris and Kim returns to New York City with a promising Filipino cast led by Jon Jon Briones, who was part of the original London ensemble.

Described by many as phenomenal during the opening night preview on March 1, the veteran stage actor turned nostalgic when asked to describe how it felt to perform on Broadway for the first time.

“I’m older now,” Briones told INQUIRER.net as he was signing autographs and taking selfies with beaming fans after the show. “When you get older, you learn different things. It’s amazing… this [is] my first Broadway show!” 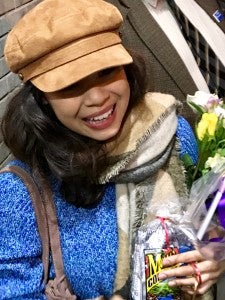 Brilliant in every moment of his performance, the 51-year-old actor delivered his role with passion, gusto, wit, humor and so much more. His rendition of “The American Dream” was spot on, making it the most applauded solo of the evening. It almost felt like the role was his second skin, such that no one else could replace him.

The reception wasn’t quite as warm for newcomer Eva Noblezada, who portrayed the lead role of Kim. Hers is a tall order. Though being compared with Salonga might be totally unfair, it cannot be helped. She has big shoes to fill and must work harder to create her own niche as the new face of “Miss Saigon.”

Noblezada, who was discovered during a performance at the Jimmy Awards, got emotional at curtain call and was enthusiastic to meet and greet fans patiently waiting for her in front of the Broadway Theatre’s stage door. 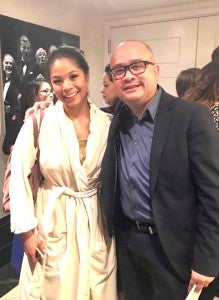 “My first night on Broadway was amazing,” she told INQUIRER.net. “I am appreciative to everyone who came to support my show. Salamat!”

The actress performed most of the show’s iconic musical numbers, namely “Sun and Moon,” “The Last Night of the World” and the achingly nostalgic “I’d Give My Life for You.”

“At 21, four years after she was first chosen to star as Kim on West End, you would think that she has already gained experience and a strong foundation in order to play the part carefully well,” said Vince Gesmundo, concert producer in Queens, New York, who confessed that he had seen the show a dozen times before. 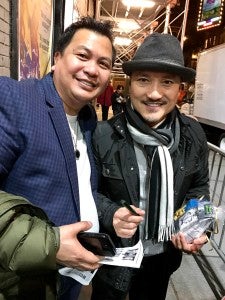 “Eva remained juvenile in her acting, not taking as much consideration in performing on stage, not only singing per se. There are moments where it felt she was detached from her role and was merely there to play the part, nothing more,” he added.

Meanwhile, Rachelle Ann Go was believable as Gigi, one of the prostitutes in this 1975 Vietnam War story. She described to INQUIRER.net her first Broadway experience as “nerve-wracking yet very powerful.” “It’s just going to keep getting better, can’t wait,” she said.

Violeta McGough, board member at the Philippine Independence Day Council, found the 2017 “Miss Saigon” just as exciting as it was for her in 1992. 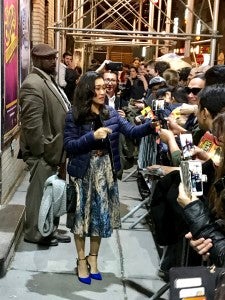 “This was my very first Broadway show 25 years ago,” she told INQUIRER.net. “My husband surprised me with a ticket on Feb. 23, 1992, our first wedding anniversary. Tonight, I’m with my youngest daughter. This is my gift for her 16th birthday.”

Happy to be sharing the moment with her daughter this time, McGough marveled at how Noblezada sounded a lot like Salonga, although the former’s portrayal made Kim seem tougher. Like many Filipino Americans, she found the helicopter sequence the most exciting and Briones superb in performing “The American Dream.”

“One of my favorite cast members is The Engineer, Jon Jon Briones. He is amazing, the scene on “The American Dream” is superb. The American GIs are angrier and meaner, using and abusing Vietnam’s women, culture and politics. The helicopter sequence is the most exciting scene. The Bui-Doi Foundation is new and it’s like a plea for forgiveness from the Americans to the world,” she said. 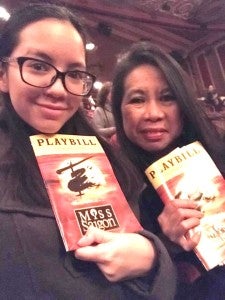 “I had the pleasure of watching the revival of ‘Miss Saigon’ twice on the West End, both with Eva and Jon Jon. But for some reason [that] I cannot explain, last night’s first preview performance packed an emotional wallop and just hit it straight to the heart. Eva Noblezada was a revelation. She was very raw, yet commanding. Her eyes pierce through you. Jon Jon Briones was the ultimate engineer. He mastered his craft and gave a performance that we can discuss with the next generations,” he told INQUIRER.net.

The musical first opened in London in 1989 before coming to New York City two years later. It had a strong run of over 10 years in both cities, and has been staged many times around the world over the past 28 years.

MOST READ
usa PH nurses being readied for a Canada province’s emergency rooms
usa Kim Kardashian gets $200K monthly child support divorce settlement from Ye
usa Ninoy Aquino and my cousin Stephen – political and personal tragedies
usa Best Christmas Appetizers
usa How to Find Out Who You Were In Your Past Life
usa Chinese Massage: Meaning Explained
usa Man in hate crime attack on elderly Filipina in NY gets 17.5 years in prison
DID YOU KNOW?
25 Best Deals for the Holidays - Gift Guide 2022
Best Crystals for Protection Against Negative Energy
25 Best Holiday Deals: Top Brands to Shop This Holiday Season
Best Barbie Dollhouses 2022
Best Anime Mouse Pad 2022
5 Ways to Hack the Holidays with the Best Cash Back App
4 of the Best Holiday Gifts for Coffee Lovers