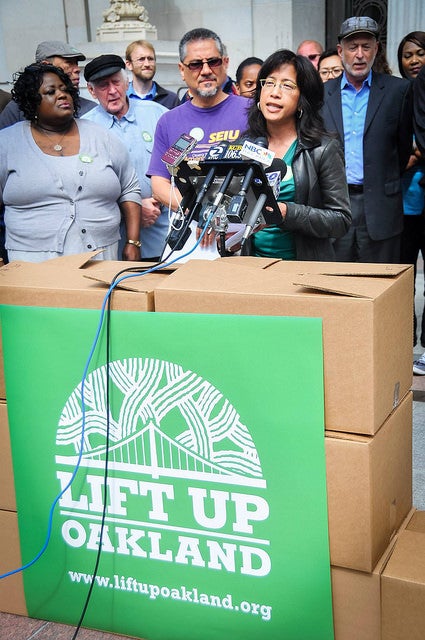 Bas staking claim for the diverse residents of her town. CONTRIBUTED

OAKLAND, California — The first Filipino American elected to a public post in this city invoked a concept most emblematic of her ancestral homeland at her installation.

When Nikki Fortunato Bas swore in Jan. 7 as representative of District 2 on the Oakland City Council, she heralded People Power thrice in her vow to govern by making decisions not for, but with, her constituents.

She knows about the bloodless revolution that ousted the 20-year Marcos dictatorship, and her recurring phrase embodies the spirit behind her intention to run for public office.

“My reference to people-powered government stems more from my work over the past 12 years contesting for power in cities,” Bas told INQUIRER.net.

At the celebration she co-hosted with fellow victors, Bas roused her supporters to stand up and be recognized because they would be working together to confront the three most important issues she gathered from them during her campaign:  housing; a city budget that gives priority to human needs; services for every neighborhood. 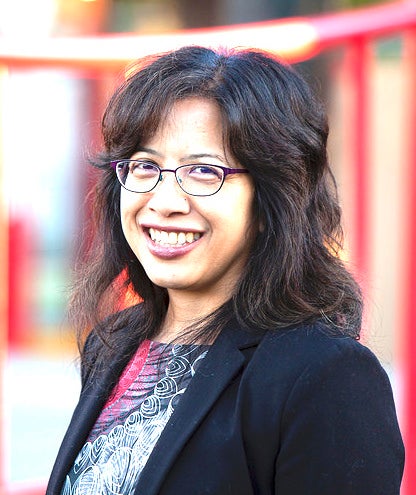 An activist for 20 years, Bas defeated the two-term incumbent on her first campaign for elected office. CONTRIBUTED

“As your councilmember, I will have a transparent, accountable government,” she promised some of the 11,273 who voted for her.  “We can grow as a city that is equitable and inclusive. We can do this and we will do this.”

Her clamor for inclusion surprises no one who has known or observed Bas.  In her, Oaklanders who have been struggling quietly but persistently to make ends meet have a champion.  Bas gives them a voice and a whole lot of muscle.

Bas is an avowed progressive, a term coursing through current politics with the stunning upset victories of the under-40 population of color, mostly women, in the midterm elections, notably in the U.S. House of Representatives.

“Being a progressive means leading with values I learned from my parents, immigrants from the Philippines, and from the immigrant women workers who taught me to organize,” she explained. “Witnessing my parents struggle taught me integrity, honesty and fairness, while organizing with workers showed me the importance of justice, equity and accountability. I will bring proactive, values-based leadership into City Hall.”

The daughter of now-retired Dr. Mauricio Bas and nurse Fe Fortunato Bas who came to this country in the tumultuous 1960s from Cebu and Mindoro to continue their education, Bas was born in New York in 1968.  She attended the University of Virginia, where she earned a degree in Economics in 1990.  The fresh graduate relocated to California shortly after to “connect with the Asian Pacific Islander and activist community.” Her parents’ beginnings informed the sensibilities of the young Nikki, drawing her toward altruism. For over two decades, Bas has planted herself in the grassroots movement.  She started as a volunteer with the Asian Immigrant Women Advocates in Oakland Chinatown, where she sowed her commitment to social justice. Until last year she was executive director of Partnership for Working Families, which describes itself as a “national network of leading regional advocacy organizations who support innovative solutions to our nation’s economic and environmental problems.” 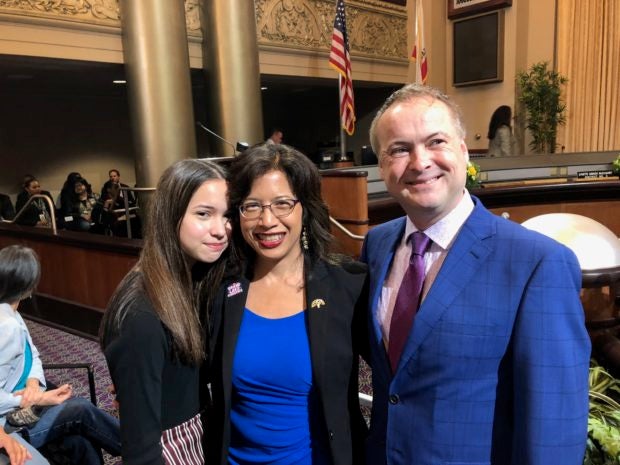 She made her mark earlier while organizing garment workers in Oakland Chinatown. Mostly women and immigrants, they were taking home less than they had earned legally.  With the resources of her organization, Bas stood by them, inspired by their courage and resolve to seek justice against their corrupt employer.  The effort took four years, the outcome favoring the workers.

Bas sets her sights on causes that would lift the lives of her fellow residents.

Much has been said about the “two Oaklands” in allusion to the affluent residential “Oakland hills” and the urban area surrounding it that residents label the “flatlands.” Last year two feature films explored the lives of flatlands denizens in the face of the changing landscape and lifestyle, their obvious differences and inner similarities.

The city’s past portrays a fertile ground for political agitation. Bas defines “People Power” as a participatory bid for power in cities. CONTRIBUTED

“We are rich in diversity, culture and social justice history including the Black Panthers and Chinese civil rights movement,” said Bas, who wants non-Oaklanders to get to know the often misunderstood city across the less-popular bridge from its world-famous neighbor.  She assures those discouraged to visit by frequent reports of violence that “Oakland is a wonderful, friendly city full of love.”

Proud residents call it “The Town” as emblazoned on Golden State Warriors jersey, while their more prudent counterparts refer to the general area known as “The East Bay.”

From its flagship here, the social service nonprofit Filipino Advocates for Justice has been serving the community since 1973.  For nearly half a century, FAJ has offered the kind of welcome Bas commends. Its programs aim to assist newcomers and protect them from exploitation.

Then again even homegrown folks have been vocal with their frustration, expressing disenchantment with previous administrations. Tech-triggered rent soared along with housing values, displacing already strained residents.  The gap widened between those comfortable and those in need as alienation between populations grew, spurring the Filipina American activist toward a new objective.

On a brick wall on East 12th Street and 13th Avenue near Lake Merritt last year emerged a mural celebrating Oakland’s diversity. Donated by sculptor and former news anchor Dana King, the collaborative valentine features poppies and lilies representing local communities of color.  One name pops out of the field of blossoms, that of the challenger to the then-incumbent Council member Abel Guillén, who did not quite live up to his promises, according to Oakland Rising.  The progressive political organization that supported him four years prior heartily endorsed Bas in last year’s race.

District 2 is where Bas and her husband, Brad Erickson, a lecturer at San Francisco State University, and their 14-year-old daughter, Balana, make their home.  They thrive among working families and individuals of various backgrounds and share hope for a bright future there.

“I decided to run because I love Oakland’s community, diversity and rich cultural heritage, and fear that displacement, gentrification and growing inequality are threatening our very identity as a city,” Bas said. “The #BBQBecky and #JoggerJoe incidents (Ed: White residents who called police to complain about residents who were black for engaging in ordinary activities.) at Lake Merritt are wake-up calls for all of us. We must come together to build an inclusive, just and equitable city, and we need independent leaders, rooted in our communities, who will take action. It starts with acknowledging that housing is a human right and prioritizing housing solutions for all Oaklanders.”

Her vision is simple: “An Oakland for all of us…governing together with a set of values that we promoted — equity, inclusion and community participation. ‘All of us’ means that I will represent you whether you voted for me or not,” she declared after swearing in en masse with fellow new council members  Sheng Thao (Dist. 4) and Loren Taylor (Dist. 6) before City Clerk Latonda Simmons.

She recounted the focused steps she took to listen to constituents and hearing a common refrain of feeling “left out.”

“We feel the real threats of growing inequality, displacement and gentrification produced by systemic racism and unchecked corporate influence,” she echoed their apprehensions before enunciating her recommendation.  “These are problems we can solve if this council along with the rest of our city government — all lead together with a set of values that prioritize equity and real democracy.”

She spelled out her plan to curb the housing crisis in an op-Ed (Prioritizing People in our Housing Policies, Oct. 18, 2018) in the East Bay Express, also an endorser:

“First, we must prioritize the development of 100 percent affordable housing projects. Second, we must set requirements for at least 25 percent affordable housing on new development and pass robust community benefits agreements. Third, we must generate new revenue such as charging private, market-rate residential and commercial developers the true cost of their infrastructure burden. Oakland taxpayers should not subsidize profitable, market-rate development. Finally, our council must pass a Public Lands Policy today, not tomorrow, not in three years, but now.”

“Oakland’s housing crisis is out of control and we need experienced, compassionate leadership that recognizes housing is a human right.  The need to improve and increase affordable housing and provide options for the growing homeless population requires a champion who can bring residents, developers, and housing advocates together—and collaborate with the county and state—for win-win solutions.”

The winner represents a demographic that includes working mothers, single, heads of households or “unsheltered,” in her lingo. 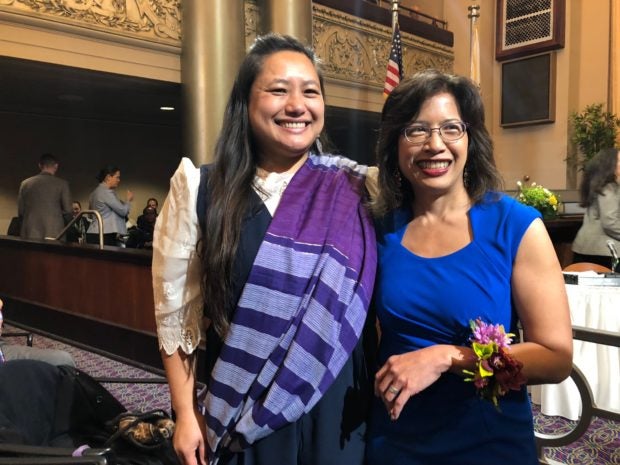 “Many work in low-wage industries like retail and restaurants and we must ensure they know their rights to minimum wage and paid sick leave. Women who work in industries like hotels are subject to sexual harassment and assault. Oakland voters passed Measure Z in November to help address this.”  She referred to the measure requiring hotels to provide employees with an emergency contact device such as a panic button to report crime, violence or threatening behaviors.  It also sets a minimum hourly wage for hotel workers of $15 with benefits or $20 without benefits, and imposes workload restrictions.

Her empathy comes from a deeply personal place.

In a campaign video, she talks to activist Rebecca Solnit about flying to New York to join thousands of women protesting in front of Trump Tower to denounce Pres. Donald Trump’s “boasting about sexual assault.”  She said she disclosed her own experience as a sexual survivor at that moment “for my daughter, for children and other women.”

Hers will be among the voices demanding policies to deter sexual assault everywhere when she speaks at the 3rd Annual Women’s March tomorrow, 10 a.m.-3 p.m., Saturday, Jan. 19, at the Lake Merritt Amphitheater.

The Oakland action simultaneously occurs with sister marches around the country in a show of solidarity.  To Filipinos, that is People Power, a concept Oakland Council Member Nikki Fortunato Bas embraces.