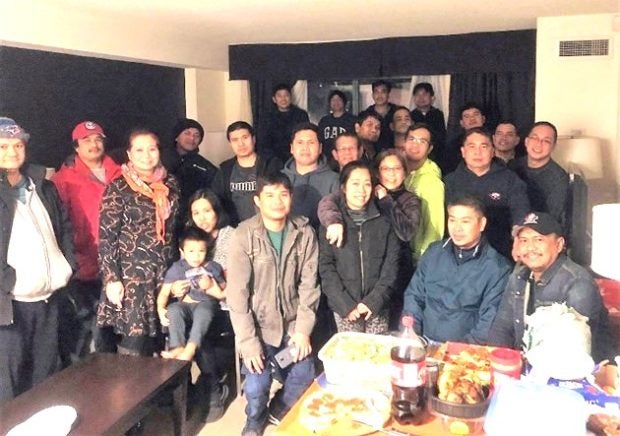 Honorary Vice Consul Elizabeth Eustaquio-Domondon (third from left) and members of the Filipino community welcome Filipino seafarers in Halifax shortly after they were evacuated from the Yantian Express on Monday, Jan. 13. PH EMBASSY OTTAWA

OTTAWA — The Philippine Embassy in Ottawa says 17 Filipino crew members have been evacuated from a Halifax-bound container ship that has been burning off Canada’s East Coast since Jan. 3.

The seafarers from the Yantian Express reportedly arrived in Halifax on Monday and were making arrangements with their fleet manager to return home.

A photo from the embassy shows members of the crew in a room with Elizabeth Eustaquio-Domondon, the Philippine’s honorary vice-consul in Halifax.

The embassy says members of the local Filipino community met the seafarers and provided them with food and other necessities.

The entire 22-member crew of the Yantian Express boarded a rescue tug after the 320-meter ship caught fire about 1,900 kilometers southwest of Halifax.

A spokesman for the U.S. Coast Guard says two more firefighting tugs, the Atlantic Enterprise out of New York and the Union Sovereign out of Rotterdam, N.Y., have been dispatched to help put out the fire aboard the Yantian Express.

Two tugs have been on the scene for days, and the German shipping company Hapag-Lloyd says the fire involving multiple containers is “widely contained and under control.”