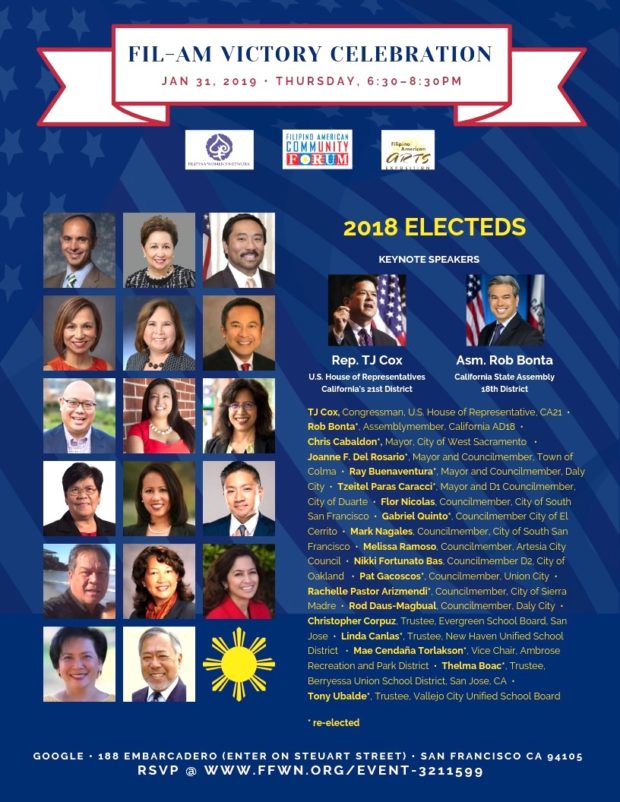 Flyer touts elected officials who will be honored along with appointed public servants at the Fil-Am Community Forum victory celebration on Jan. 31.

SAN FRANCISCO – Leaders here are kickstarting the new year with impassioned resolve to unify and mobilize the community with a definite focus on the next two years.

Constant collaborators Marily Mondejar and Al Perez are joining forces anew to celebrate and build on the victories of Filipino American political candidates in the recent midterm elections at a grand meeting of the Fil-Am Community Forum 6-8 p.m., Thursday, Jan. 31, at the Google Community Space at 188 Embarcadero,San Francisco.

The event is free and open to all who confirm attendance no later than Jan. 25.

Newly sworn-in United States Rep. Terrance John “TJ” Cox (D-21st District), the first Fil-Am from California elected to the US Congress, has confirmed to keynote the event, unless he is required to remain in the Capitol should an emergency vote be called on the current government shutdown.

“I say #FilAmtoo. It’s our time to step up. It’s Fil-Am time. I commend those who continue to lead the way. The last couple of years, we’ve had Filipina women Millennials winning the city council races: Malia Vella at City of Alameda, Juslyn Manalo at Daly City and Melissa Ramoso at City of Artesia. We need more brave FiAms to step up. Run for office or donate to FilAm candidates. Volunteer at candidate campaigns,” Mondejar, founder and CEO of Filipina Women’s Network, told this writer.  “We finally have Rob Bonta at the California Assembly, TJ Cox in the US Congress. We need to crack the marble ceiling in the US Senate. We’re still sorely under-represented. I’m optimistic about 2020. #FilAmToo #ItsFilAmTime #ItsOurTurn.”

Both powerhouse figures in the city and county of San Francisco, Mondejar and Perez each head a now-iconic organization.  Since 2006, they have been directing the ad hoc Fil-Am Community Forum to celebrate fellow Fil-Ams in public service. 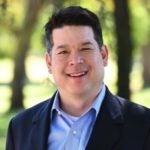 In 2006, they convened the first gathering of victors and supporters as the banner of Fil-Am Community Forum.  The event drew public servants from all over Northern California.

“The Fil-Am Victory gathering is more than a celebration of all the candidates who won in the midterm election cycle,” Mondejar stressed the objectives behind the activity. “It is also a meeting of the incumbent elected officials, appointed commissioners at the local and state levels, consultants/staff members of the elected incumbents and community leaders who are critical to the FilAm community’s political voice.”

“We have found that these gatherings inspire our community especially the youth which has now resulted in Millennials elected in the last couple of years and engaged in public service,” Mondejar revealed. “The meetings challenge our community to do more. We want to engage them so Fil-Ams can secure seats at the decision tables that impact the lives of our families especially women and children. To take actions so we can play a strategic role in public service especially the 2020 elections and beyond.”

The debut and most of the subsequent celebrations took place at the Philippine Consulate General.  This time Google is sponsoring the venue.

Although unable to attend the celebration because he will be at the Regional Heads of Post meeting in Washington DC that weekend, Consul Gen. Henry S. Bensurto Jr. commended organizers of the event.

“The Consul General joins the Filipino Community in congratulating newly elected and appointed American officials of Filipino parentage and ancestry across national, local, and municipal levels. The Consulate takes pride in their accomplishments and contribution for the betterment of their communities. The Consul General also extends its appreciation to those who participated in the elections but did not make it and encourages them to try again in the next polls,” Bensurto issued a statement to author. 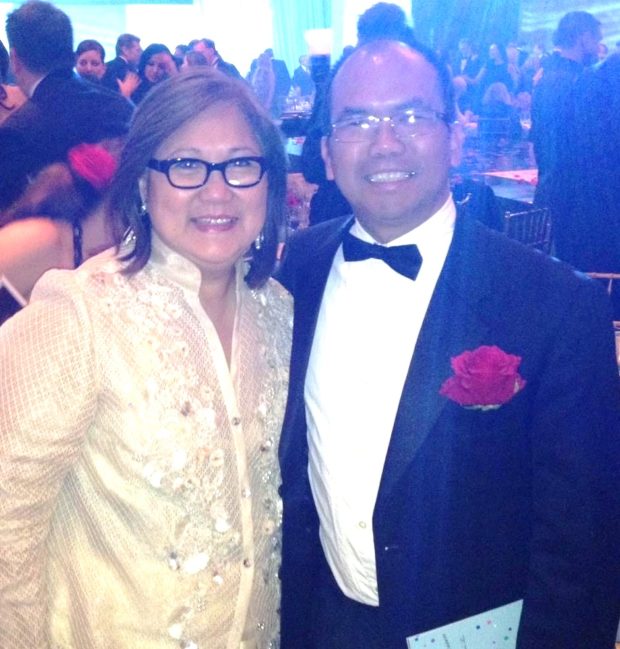 Leading the roster of honorees is Cox, who overcame a 25-point primary deficit to defeat the three-time incumbent for the seat in Central Valley with his support for the Affordable Care Act.  The Walnut Creek-born engineer and entrepreneur is the son of a father who immigrated from China and a Filipina mother, Perla de Castro. He and wife Kathleen Murphy, a pediatrician, have four children.

Besides their common ancestry, many of the invitees share the experience of losing their first political campaigns, learning from it to eventually fulfill their ambition.

“I’m excited to attend the celebration and meet my peers in service of the community,” said Elsa Agasid, a first-term Commissioner with the San Mateo County Commission on Aging and 2019 president of ALLICE Alliance for Community Empowerment.  “I appreciate the opportunity to congratulate Congressman Cox as well as know what others are doing, learn from them and offer my humble resources.”

The event is aimed at heightening Filipino pride worldwide, per Mondejar, who feels strongly about “calling out those who deny their Filipino heritage.”  Organizers are launching a webpage to update our nonpartisan Filipino worldwide leaders list at https://filipinawomensnetwork.org/elected-and-appointed-officials/.

While the invitation has been circulated through various platforms, Mondejar urged stakeholders to pass along the information to everyone who aspires to run for office or supports someone who does.

Inquirer.net contributor Cherie M. Querol Moreno is in her third-term as Commissioner with the San Mateo County Commission on Aging.  The Filipina Women’s Network named her among their 5 pioneer Vagina Warriors for her work in domestic violence prevention.