’The Shack’ shows the power of forgiveness

’The Shack’ shows the power of forgiveness 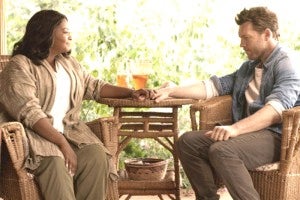 Octavia Spencer and Sam Worthington in “The Shack.”

“The Shack” takes us on a father’s uplifting spiritual journey. After suffering a family tragedy, Mackenzie Phillips (Sam Worthington) spirals into a deep depression causing him to question his innermost beliefs. Facing a crisis of faith, he receives a mysterious letter urging him to an abandoned shack deep in the Oregon wilderness. Despite his doubts, Mack journeys to the shack and encounters an enigmatic trio of strangers led by a woman named Papa (Octavia Spencer). Through this meeting, Mack ﬁnds important truths that will transform his understanding of his tragedy and change his life forever.

This ﬁlm is based on the phenomenally successful novel ‘The Shack,“ by author William P. Young, which stayed on The New York Times Bestsellers List at No.1 for over 70 weeks. Book sales have soared past 22 million copies and it is currently published in 40 languages.

From all appearances, Mack Phillips seems to have a good life: three great kids; a beautiful wife; a lovely home. Nothing seems amiss. But when Mack takes the kids for an overnight camping trip, what starts out as a fun getaway soon turns into a parent’s most horrifying nightmare. His youngest daughter, Missy (Amélie Eve), is abducted from their campsite and her body is never recovered.

As Mack struggles to make sense of such enormous tragedy, he descends into a great sadness where his life starts to unravel and all the ghosts that he thought he had buried long ago, resurface and push him to the edge of a precipice. It’s at this time, at his darkest hour, that Mack receives a mysterious note in his mailbox with an invitation from God to meet at the shack, the place where Missy’s bloody dress was found. In a desperate attempt to ﬁnd closure and answers to his daughter’s murder, Mack heads back into the Oregon wilderness to confront the killer or God, or both.

Willie (Tim McGraw) gives the audience insight into Mack’s early life and the demons that haunt him. Willie is the only man, the only male ﬁgure that Mack connects with because he has trust issues with men, which comes from his relationship with his father. Mack’s wife Nan (Radha Mitchell) has an unshakable faith in God. Mack’s is at best surface deep, and going to church is more about pleasing his wife and setting an example for their kids. Mack’s relationship with God is through Nan’s eyes.

The emotions and themes of “The Shack” are evoked not only through performances and visual design, but also through an inspired music album that coincides with the nationwide release of the ﬁlm. In addition to Tim McGraw’s work in front of the camera, he and his wife, Faith Hill, recorded a spiritual duet titled “Keep Your Eyes On Me.“ This is the ﬁrst song they have co-written together. Despite the many different sounds, the album plays true to the spirit of the story.

As Mack continues in his journey, there are two more entities he must encounter. One is, Sophia (Alice Braga), who shows Mack how passing judgment on others and the need for retribution do not free him from pain but keep him trapped. Sophia is grounded and connects with Mack in a very human way. The ﬁlm offers the beautiful message that forgiveness releases you; it sets you free. Hopefully it will make people stop and appreciate life and this world a little more.