Love comes for the consul in Gotham

Love comes for the consul in Gotham 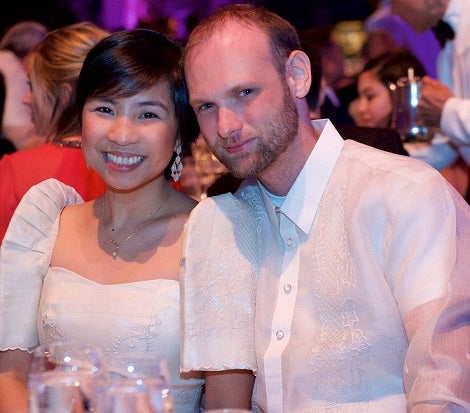 NEW YORK — Some diplomats fell in love with the country they were sent to, the culture and its people. Consul Khrys Corpuz just fell in love. Period.

Khrys is returning to Manila, after six years in New York City, with her Ukraine-born American husband, Dmitry Popov. She’s put in her time, made a lot of friends, carried out some novelty projects and earned a promotion. Not bad for her very first diplomatic assignment.

When she learned she was going to NYC, Khrys recalled she almost could not believe it.

“New York is a coveted post, and I did not consider myself as a standout. I did not come from a high-profile office in the DFA, I was a ‘long shot,’” she said while sitting on an exercise ball behind her desk.

She remembered being interviewed for the position of junior female officer in charge of Public Diplomacy by then Consul General Mario de Leon Jr. sometime in March 2012. On their wedding reception, Ambassador De Leon, who stood as one of their ninongs, revealed she wasn’t his first choice but the post dropped on her lap anyway because his favored candidate was on study leave and unavailable. 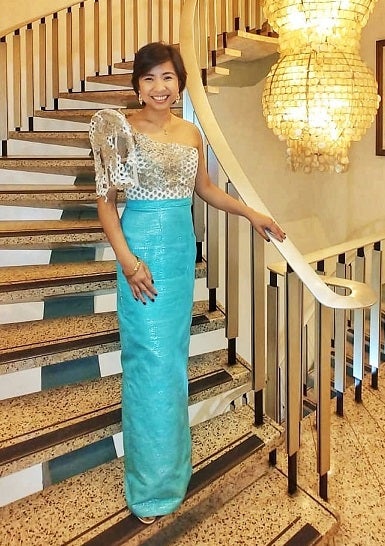 Khrys was hard to bypass. She was in her early 30s, smart, exuberant, willing to learn, polite and pleasant. I first met her when she was still learning the ropes. At a book launch for former President Fidel Ramos, she was supposed to open the program. Her voice quivered a bit. In time, opening an event has become a breeze. She was cracking jokes and knew to keep her audience in stitches. She has become confidently in charge.

“I became comfortable over the years,” she said. “Just comfortable, not confident.”

After graduating from UP Diliman with a bachelor’s degree in Tourism, Khrys took her MBA at De La Salle University. While in school, she worked for a travel management company and earned a badge from the Australian Tourist Commission as an “Aussie specialist agent.” She traveled to Australia once or twice a year to upgrade her knowledge about the travel industry.

“I like the travel, the perks,” she said. “After about five years it dawned on me that corporations are really just for profit. I wanted to do something else.”

In New York, Khrys became the consulate’s point person with the millennial community.

“I dealt primarily with young Fil-Ams. The millennials, they excel at doing things on their own. It’s so hard to attract them to join the mainstream community. That has always been the issue,” she pointed out.

Less than one year in, Khrys garnered the friendship and cooperation of some young community leaders and together they organized the Philippine Graduation (PGRAD) on the East Coast, in June 2013. For the next six years, they would make more collaborative programs, such as the Leadership and Mentoring Seminar Series, Dual Citizenship initiative and the Innovators Network.

In July this year, Khrys pioneered a heritage tour for the young Filipino Americans called Diskubre. She led a group of millennials traveling around the Cordilleras for 11 days, trying their hand at farming, preparing a boodle feast, sharing in the rituals and traditions of the communities while learning about their homeland’s history.

“It is one of my proudest accomplishments in New York,” she said.

She met Dima (Dima is Dmitry’s nickname), an IT professional from Brooklyn, on a dating app she tried on the suggestion of a friend. Their first dinner was during Filipino Restaurant Week at Purple Yam. “It wasn’t instant connection,” she recalled.

While they were dating, she asked if he was willing to live abroad. Around this time, her recall to the home office was on schedule. Dima said he did not like the idea.

“He said ‘no’ right away. I said OK. I just let it simmer, I just sat on that information,” she said. A week later, she told him why she had to go back home. Showing her parents around NYC. Her father Edgardo is an engineer, and her mother Lolita (now retired) was a sales director at Pocketbell.CONTRIBUTED

Dima’s idea was for the two of them to get married and for her to live with him in Brooklyn as his wife. Khrys’ preference was to continue to “live the diplomatic life.”

Where to live, how to proceed became an unsettled issue, but the two got married anyway. When he saw the Philippines – they had a second wedding in Tagaytay — he felt an instant connection with the country and the people.

She said, “He loved the country on the get-go. We were biking in Intramuros during Diskubre, we were biking around the slums with kids playing in the streets, and he said, I have a weird feeling about this place. I feel so at home. People are so warm.” Dima is now open to the idea of working remotely or finding a job with a local IT company.

“What I found early on was that Russians are very similar to Filipinos. They’re very close to family,” she said.

Dima grew up in Ukraine when it was still a state within the Soviet Union. He was 9 years old when his family fled to the U.S. and settled in Brooklyn.

“The Russians are very close to family. I have noticed this about his friends too. Within three weeks of dating him, I already met his grandparents.”

Khrys and Dima look forward to start their new life together in the Philippines. Another new beginning.