EXCLUSIVE: Up close with Catriona Gray

EXCLUSIVE: Up close with Catriona Gray 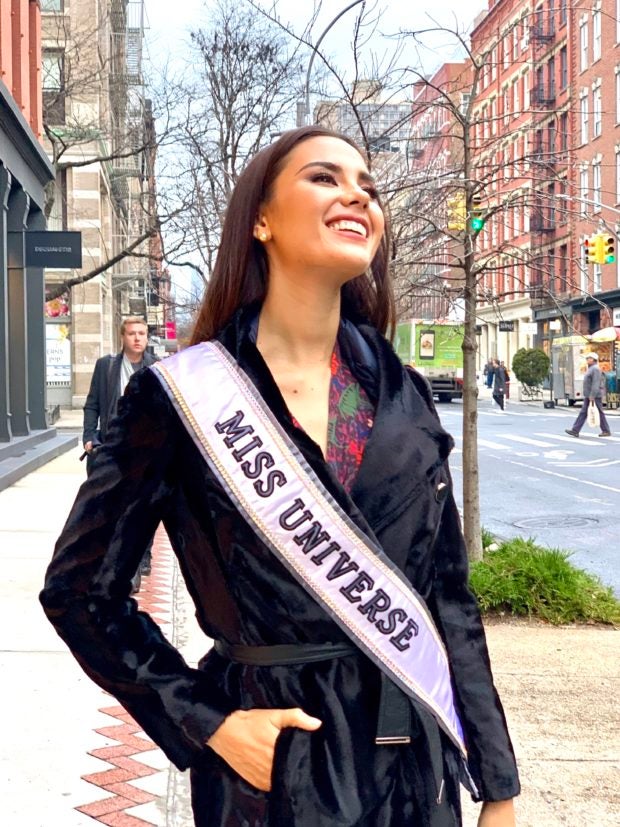 NEW YORK—If you’re among the cynics who doubt whether or not she’s Filipina enough to compete for the Philippines for the world’s most coveted beauty title, you need to meet Catriona Elisa Magnayon Gray in person.

She has a lot to say about how her mixed heritage, deep appreciation of the Filipino culture and personal journey have helped her earn the fourth Miss Universe crown for the Philippines. She now joins the elite group of Gloria Diaz (1969), Margie Moran (1973) and Pia Wurtzbach (2015). Pia and Catriona both have parentage of mixed ethnicity that has elicited some controversy.

“I may not have been born and raised in the Philippines, but my heart is with the Philippines,” Australian-born Filipina Gray tells INQUIRER.net in an exclusive interview over hot tea and French macaroons in SoHo.

The 5’10 stunner, who defies the “beauty queens are only skin deep” canard, is every inch a proud Filipina. She turned 25 a couple days ago just before doing media rounds that began Monday this week in New York City, her new home for the duration of her reign.

The only child of a Bicolana mom from Oas, Albay, and an Australian-Scottish father, Catriona maintains that “This [mixed race] made me who I am. I won Miss Universe as Catriona Gray and that is the result of my two cultures. I have embodied Miss Philippines as my strength, but the person that I am today is [also] because of my upbringing in Australia.” Yes, she clearly is a Miss Philippines.

As a teenager, Gray moved from Cairns, Queensland to Manila during a gap year in college. She tried modeling at first, but admitted that when she hit a crossroads, “I went on to pursue my creative side, which is music, hosting and being a spokesperson.”

She was 18 then and it was not until four years later that she eventually succumbed to joining beauty pageants, discounting her winning “Little Miss Philippines” in Sydney when she was five years old. Her pageantry destiny seems to have been written as early as two decades ago.

For the young Catriona, beauty pageants were nothing more than just a show. “Growing up, I never aspired to be a beauty queen. I thought it was just a glamour event which can be the initial perception of some people—all they see is the show, but when friends of mine joined and I saw the platform the pageantry offered and the voice the beauty queens had in the Philippines, I was just amazed.”

Gray confessed that she was so disappointed when she did not get the Miss World title in 2016. She came close, landing in the Top 5. She felt so hurt that she vowed not to join any more pageants. But the support of many Filipinos “who believed in me,” made her think again.

“One pageant was enough for me in this lifetime until I got so many messages from people. Others would come up to me and ask ‘Cat, please join again, join Binibini, we would love for you to represent our country’. At firstayoko, I didn’t want to, I’ve done my part and medyo nasaktan akofrom the past experience.” But as destiny would have it, she joined Binibining Pilipinas 2018 and won the right to represent her country as Miss Philippines Universe. 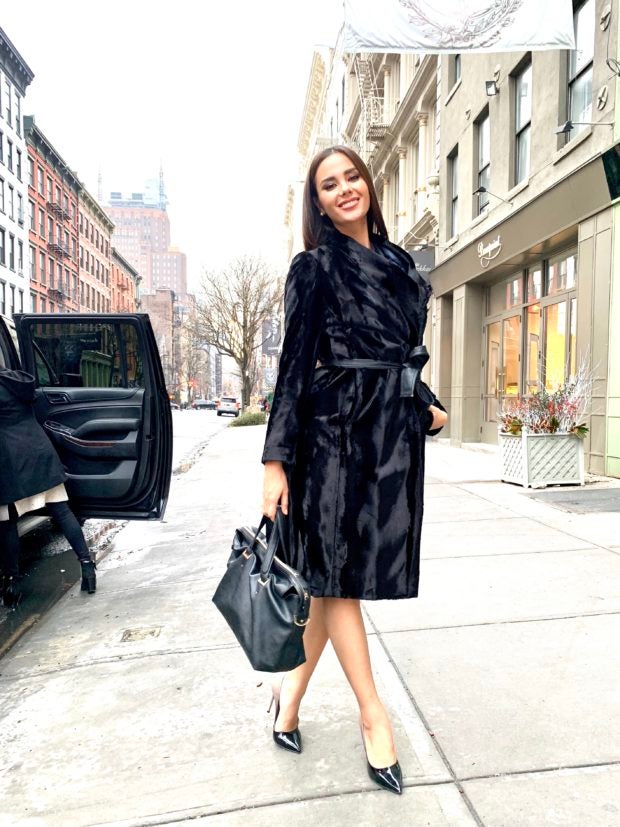 Catriona Gray has no qualms about her mixed ethnicity, which has stirred some controversy. INQUIRER/Elton Lugay

The road to Miss Universe was something Catriona took very seriously. In an unprecedented way, she is perhaps the most zealous Filipina beauty queen to ever join the Miss Universe competition. She was hands-on in every detail of her participation from picking her own coaches and glam team (including a social media consultant) to conceptualizing the national costume and stunning evening gowns that integrated various aspects of the Filipino cultures of Luzon, Visayas and Mindanao. Even her now famous slow-mo twirl and lava walk were products of her team (led by Carlos Buendia Jr.), earning accolades from the likes of Tyra Banks. This was the perhaps the first time in the recent history of Binibining Pilipinas that the country’s representative was trained by already established beauty queen camps.

And the result was magnificent. The three major Philippine islands (LuzViMinda) were not only featured in her national costume, the design opened a whole new global conversation about the diverse culture of the country’s rich history. The stunning lava red gown she wore in the finals, by her designer-friend Mak Tumang, was not just inspired by Mayon Volcano but was also created to honor her mother, Normita Magnayon-Gray, whose hometown, Albay, is where the perfect-coned volcano can be found. It was also Normita who once dreamed 12 years ago that Catriona would win Miss Universe in a red gown. We all know now how that dream turned out.

Reflecting on her recent Miss Universe journey, Catriona has this to say. “It’s really about staying true to yourself and surrounding yourself with people that know you and support you. That’s something I’m so grateful for. My team, my mentors, my stylists, glam team, everyone—they gave me a family that I could lean on. They allowed me to put my visions into place. You’re unique, you’re you for a reason and that’s what’s gonna make you standout among a sea of beautiful girls.”

So in all of Catriona’s “perfectness,” INQUIRER.net asked if there was one thing she finds a liability rather than an asset about being Catriona Gray.

“Sometimes I am very critical,” she says. “I analyze a lot and I’m very analytical in how I approach things and my own personal achievements. I didn’t bask in glory when I was younger. I wouldn’t see the weight of my achievements because I’m so focused on the next thing already. I look back and think I haven’t done much, but really I have—that makes me quite serious. I don’t mean to be. I’m not as bad anymore, but as a teenager that was something that I really struggled with.”

Before becoming Miss Universe, Catriona was already passionate about helping the poor and underprivileged. Though growing up she never experienced poverty firsthand, the budding philanthropist admitted that she has a soft spot for Filipino children.

According to Gray, her trip to Tondo, one of the poorest slum areas in Manila, was a  pivotal moment. “Seven out of 10 Filipino children don’t have dreams,” she said. “Why? Because no one believes in them and then there’s lack of passion, lack of support, and poverty. So to think they’re born into the circumstance, they are in a community that doesn’t even believe in them. So many aspects where children should be given the chance to dream. Something as simple as that. If they choose not to, that’s fine, but at least they were given a choice.”

“When I think about it, it just shakes me every time. We should all be on equal footing, we should be given that same opportunity. That’s why I’m so passionate about my work with Young Focus [a nonprofit organization that serves the educational needs of the poorest children in Tondo]. I really feel that education is such a primary tool that everyone should somehow be given an equal opportunity to pursue their dreams.”

After her time as Miss Universe, Gray plans to pursue music. “After or even during my reign I would like to somehow find opportunities that I could integrate my love for music with a cause.”

“Whether it be a benefit concert or like my single ‘We’re In This Together’ which creates awareness and proceeds go to Young Focus, it’s the merging of that aspect of mine and also with my causes that bring me such fulfilment. So I would love to be able to do that with my reign not just for education, for kids but even for other causes. I will love to continue working for HIV and AIDS awareness coz I know that it is really a prevalent problem not only in the Philippines, but also in different countries. I think it’s wonderful as Miss Universe that I can go to countries that are successful in addressing the problem and learn and bring some knowledge back to target the problem in our country.

Catriona wants her reign to be a “positively impactful one.”

“I want that to be the core of what I do, which is the central core of me as a person. So I just now have a bigger, wider platform. But I still wanna keep that same identity.”

For the first time in Miss Universe pageant history, select items worn or used by winners and the contestants will be auctioned online. Fans can go to screenbid.comto view the items and learn more. Miss Universe enthusiasts can go to the site to learn how to get their hands-on props, set decorations and other memorabilia including: finalist swimsuit, national evening gowns, national tiara, national earrings, and so much more.