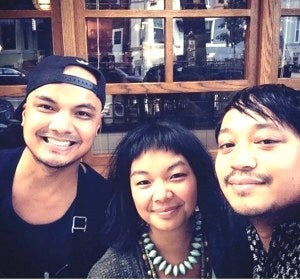 WASHINGTON, DC — Tom Cunanan, the chef behind Bad Saint, the 24-seat Filipino restaurant in the capital, has been nominated for a James Beard Award, one of the most coveted honors in the restaurant industry.

The James Beard Foundation announced the semifinalists for its annual awards last week. Cunanan is one of nine DC-based chefs nominated for Best Chef: Mid-Atlantic.

Cunanan co-owns the restaurant with Genevieve Villamora and Nick Pimentel and collectively, they came up with the menu that captivated both diners and food critics alike. Bad Saint, named after St. Malo, Louisiana, where the first Filipinos settled in the United States, is the trio’s passion project.

“I felt super surprised,” Cunanan told the Asian Journal. “I woke up the next day and got all these crazy texts from friends and co-workers saying ‘Congratulations!’”

He said he didn’t know what the congratulatory messages were for so he asked them.

“They showed me the JBF link and I was super stunned to see my name for Best Chef: Mid Atlantic,” Cunanan shared.

The nomination is a validation of the trio’s hard work in coming up with a restaurant that offers a carefully curated and evolving menu.

“It pretty much says that I’m on the right track with my career and I am showcasing Filipino food the best way I can and people are finally appreciating it,” he added.

The finalists for the restaurant and chef awards, as chosen by judges, committee members and previous winners, will be announced March 15. The winners will be revealed May 1.

On the adobong dilaw, Cunanan said, “I wanted a new way to do adobo. Classically, it’s made with just vinegar, soy sauce, bay, black pepper, and a lot of garlic. But in the south of the country, closer to Malaysia, they use a lot of turmeric and coconut milk, which seemed cool. We grill our chicken first, which gives the whole thing an underlying smokiness. It’s about building all these small layers. You get the salty, the sour, the sweet.”

The complexity of the flavors in the dishes at Bad Saint has made the restaurant one of the most sought-after restaurants in Washington, DC.

“The food that Tom Cunanan and his cooks prepare under columns of wok smoke is richly compelling no matter how many prior run-ins you’ve had with Filipino food,” wrote Pete Wells, the New York Times food critic.

And as he reviewed each of the dishes he tried, he came up with words to describe them, and did so using superlatives.

Wells called the squid adobo “astonishing, its sauce deepened and darkened by squid ink and given a slow, lingering burn by long peppers” and the oxtails and bok choi stewed in peanut sauce with an intense undercurrent of shrimp and anchovies as “amazing whether this is your first encounter with kare-kare or your hundredth”.

“I love bitter melon, but even the skeptics I’d brought with me were won over by Bad Saint’s stir-fry, in which the vegetable’s aggressive tendencies are offset by fermented black beans, softened by eggs and sweetened by a topcoat of fried shallots,” Wells said of this ampalaya con carne dish.

Cunanan’s pancit canton was “startlingly good” and Wells praised his arroz caldo for its “homey simplicity”. The food critic also acknowledged the chef’s use of local ingredients such as kale for a traditional Filipino dish such as laing.

“In the Philippines, laing would be made by stewing dried taro leaves in coconut milk. At Bad Saint, the leaves are kale, braised to a velvety tenderness and swaddled in Chesapeake crab meat,” Wells wrote. “This laing is so luxuriously flavorful, I can’t get it out of my head, and I don’t want to.”

Overall, Wells was happy with the experience and called the food from the wok to the plate as “relentlessly delicious”.

And as a clincher, he wrote, “Because the cuisine of the Philippines is so closely tied to home cooking, it’s been hard to imagine what a three-star Filipino restaurant would look like. Now I know that it looks like Bad Saint