Darren Criss has won the 76th Golden Globe Awards for best actor in a TV limited series or movie for his role in “The Assassination of Gianni Versace: American Crime Story.”

He thanked his “firecracker” Filipina mother and dedicated his award to her while holding his trophy, speaking on stage, Darren Criss thanked those who have made difference in his Hollywood success.

“As we’ve seen it’s been a marvelous year for representation in Hollywood, and I am so enormously proud to be a teeny-tiny part of that as the son of a firecracker Filipino woman from Cebu that dreamed of coming into this country and getting to be invited to cool parties like this. Mom, I know you’re watching this,” he said.

“I love you dearly. I dedicate this to you. This is totally awesome,” he added.

Criss also won an Emmy in September for playing rampaging killer Andrew Cunanan on the FX series about the murder of the Italian fashion designer. 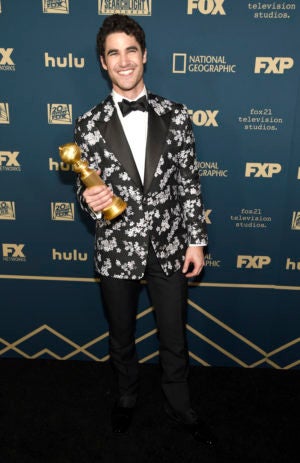 Darren Criss poses with the award as he arrives at the Fox afterparty at the Beverly Hilton Hotel on Sunday, Jan. 6, 2019, in Beverly Hills, Calif. (Photo by Chris Pizzello/Invision/AP)

Animated: “Spider-Man: Into the Spider-Verse”

Musical or Comedy: “The Kominsky Method”

Limited Series or Movie Made for Television: “The Assassination of Gianni Versace: American Crime Story”

Actress, Limited Series or Movie Made for Television: Patricia Arquette, “Escape at Dannemora”