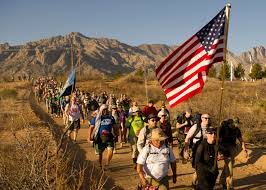 one of the toughest marathon-length events in the U.S. The race takes place in the rugged desert surrounding White Sands Missile Range.

The race honors the soldiers who defended the Philippines at the outbreak of World War II.

After 75,000 American and Filipino soldiers were surrendered to invading Japanese forces April 9, 1942, their captors marched them more than 60 miles to a POW camp. tWhite Sands Missile Base in New Mexico is the site of the grueling Bataan Memorial Death March race scheduled on March 17, 2019.  FACEBOOK

Thousands died on the way, and those who survived faced years as prisoners of war. Many died in prisoner-of-war camps.

Individual tickets to the annual race are $110, and team registrations will climb from $450 to $500. These prices remain good until Feb. 12 when fees will go up again to $125 for individuals and $600 for teams until registration closes March 3.

Organizers expect this year’s race to attract 10,000 marchers, and have moved packet pickup to the Las Cruces Convention Center. The 2018 march drew 8,471 participants.

Participants are military members from all branches of the U.S. Armed Forces and civilians from across the country and several foreign nations.

Marchers compete in teams or as individuals. In the “heavy” division, each participant carries a 35-pound rucksack. The event also features a 14.2-mile, noncompetitive route.

A time-lapse videoof the route allows marchers to see the 26.2-mile course in less than seven minutes. An inset map displays the course route, shows the start and finish lines, and water points.

Participants may register and get more information here.

MOST READ
newsinfo Duterte: It was correct for Bongbong Marcos to ‘decline’ presidential debates
entertainment Bea Alonzo willing to work with ex-BF Zanjoe Marudo: ‘Isa lang naman ‘yung ayokong ex’
entertainment Dennis Padilla answers Leon Barretto’s open letter: ‘Been reaching out to you for 15 years’
newsinfo G7 aims to raise $600 billion to counter China’s Belt and Road
entertainment Kathryn Bernardo now proud to be a morena, overcomes insecurities with BF Daniel Padilla’s help
newsinfo Crisis-hit Sri Lanka shuts schools, urges work from home to save fuel
entertainment ‘Crash Landing on You’ couple confirms pregnancy
DID YOU KNOW?
5 Best Noise Cancelling Headphones of 2022
The Shakti Mat: Does It Really Work?
12 Best Travel Cameras to Capture Every Moment in 2022
Top 10 Best Fitness Trackers on Amazon
How to Shop for Engagement Rings Without Breaking the Bank
Top 10 Resorts in Hawaii for a Summer in Paradise