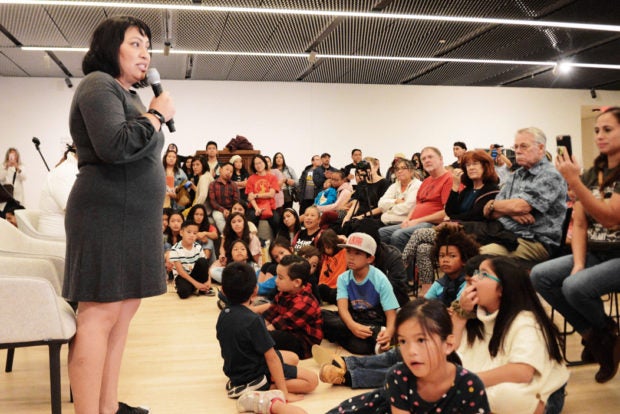 SAN FRANCISCO – With a life and legacy long overlooked and overshadowed in American history, the story of Larry Itliong, a Filipino American labor organizer, a “father of the West Coast labor movement,” and a leading figure in the Delano Grape Strike, has come to light.

Written by the late Dawn B. Mabalon, PhD with Gayle Romasanta and illustrated by Andre Sibayan, Journey for Justice: The Life of Larry Itliongwas recently launched after a year in the making and a successful fundraising campaign with the support of the community. 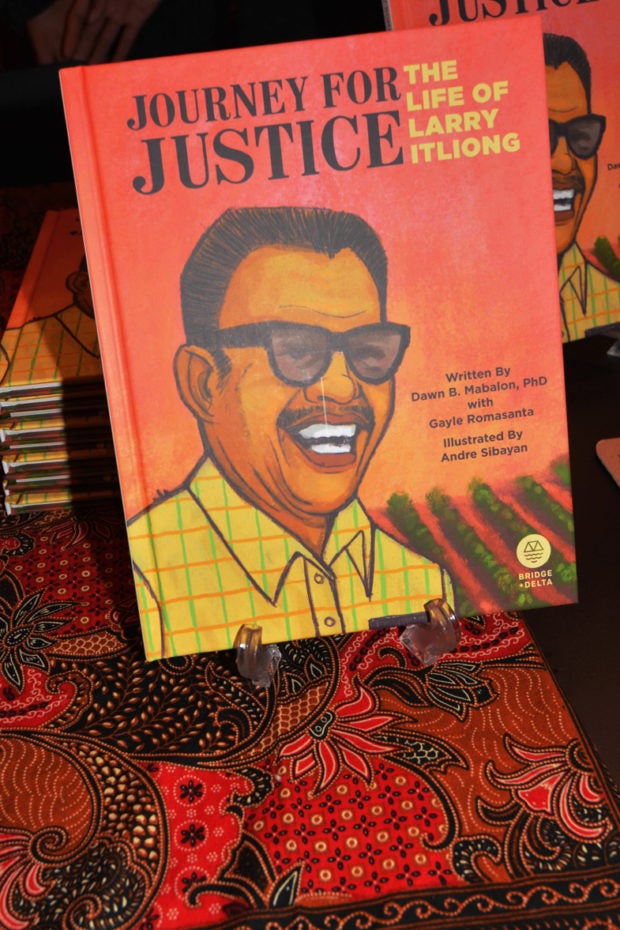 A significant contribution to the canon of Filipino American literature, the seminal book is part of its author’s legacy that will endure. It is Mabalon’s last book that was finished right before she passed away.

Published and sponsored by Bridge + Delta Publishing, a Stockton-based company owned and run by Gayle Romasanta, the initial book launching, co-sponsored by the Filipino American Center of the San Francisco Public Library (SFPL), happened on October 27 in the Public Knowledge Library, a popup and temporary branch of the SFPL, at the San Francisco Museum of Modern Art (SFMOMA). Over 250 people came.

“It turned out so well. They actually had to close the door. It was standing room only,” says Romasanta.

In keeping with the book’s initial targeted readers, the book launch featured a puppet show, with puppets as hosts of the program, and a performance by members of Sama Sama Summer Camp, a cooperative-run outdoor day children’s camp, who entertained guests with a jazz band, poetry, and covers of songs by rapper Ruby Ibarra. Ruby Ibarra, who was present, also gave an impromptu performance.

“It was really beautiful,” says Romasanta. “I couldn’t have asked for anything better. The fact that it was at SFMOMA where we hardly have, if any, representation at all; that we were able to be there.” 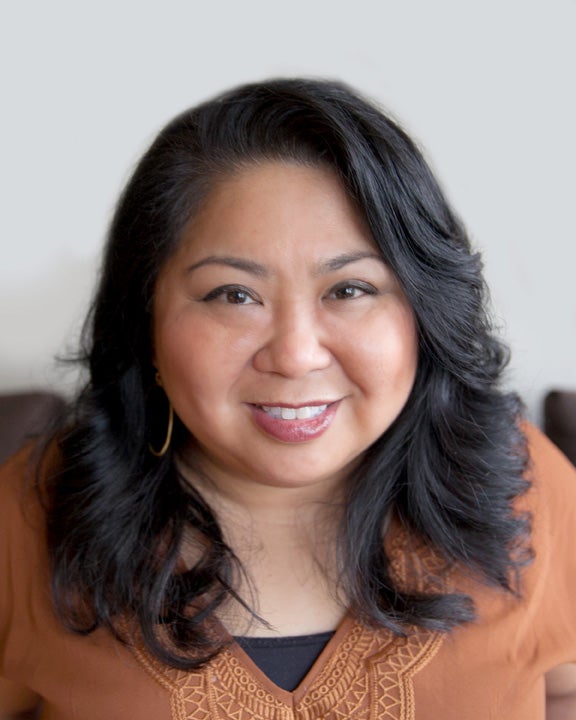 Another book launch for Journey for Justice took place on December 8 in Stockton, a place that is significant in Filipino American history as well as Larry Itliong’s story. It was held at the historic Hotel Stockton where, in the past, Filipinos were banned.

“Filipinos could not even enter. They weren’t allowed to stay there,” says Romasanta.

Also, a percentage of proceeds from Romasanta’s children’s book, Beautiful Eyeswith an accompanying activity book, that was re-launched on November 24 at SFPL, benefit [email protected] Educational Partnerships (PEP), a nonprofit service learning program for all levels of education in the community comprised of a network of educators through San Francisco State University (SFSU) and within the San Francisco Unified School District.

“Through these books, we always wanted to give back and have a targeted non-profit attached,” says Romasanta.

Mabalon and Romasanta both grew up and lived in Stockton. Mabalon was a native of Stockton while Romasanta, who was born in Manila, Philippines, migrated there when she was a child, and lived in Little Manila in 1976.

Although they did not know each other while growing up, they shared the same experience such as going to the same day care center.

“We were never picked to be the wake up fairy,” says Romasanta. “The wake up fairy wakes everybody up from napping. We both laughed that we never got to wake anybody up. [The reason] for never picking us was because they were racist.” Filipino children in Stockton as late as the 1970’s and early 1980’s grew up with and were raised with the help of manongsor elder Filipino men; the same men who, like Larry Itliong, came to the United States to work in the farms and fisheries. They became part of an extended family and were regarded as uncles in the community.

“One by one they started to pass away or they started leaving for the Philippines,” says Romasanta. “Soon, we had nobody and it was a sad reality.”

Both Mabalon and Romasanta are descendants of migrant farm workers who had, for decades, worked in the fields of California. Mabalon’s grandparents worked in California’s farms and Alaska’s canneries. Her father was a friend of Larry Itliong.

Romasanta’s great uncles from her mother’s side of the family had come to the U.S. as early as the 1930’s. They lived in Stockton and were farm workers. Her great uncle-cum-grandfather, Victor Selga, and seven other uncles to whom she had dedicated the book, bought and operated an eight-bedroom farmhouse off Bixby Road in Brentwood right on the California Delta.

Romasanta had lived in their family farm and the area and experience she had there would inspire the name of her publishing company, Bridge + Delta. “We would travel through three bridges in the river delta to get to the farm,” says Romasanta. “Many generations of my family have gone through there.”

Mabalon came across Larry Itliong’s story when she was writing her award-winning book, Little Manila is in the Heart: The Making of the Filipina/o American Community in Stockton. She was doing research and writing the biography of Larry Itliong for the last three years well into her death.

“My way of honoring manongLarry’s sacrifices and the sacrifices of my family who came over and worked the fields is to tell their story,” Mabalon had said.

The project proved to be quite challenging with limited time and resources on top of her busy schedule as a professor at SFSU.

Armed with enough research that she had done on Larry Itliong’s biography in order to write a children’s book, Mabalon readily agreed when Romasanta had approached her with the idea for a Filipino American history book for children.

Mabalon and Romasanta had been friends for over 20 years and at one point were comedy partners doing shows at Bindlestiff Studio where they also met and worked with Sibayan. The three formed the team for Journey for Justice.

Mabalon, Romasanta, who, at the time, was pregnant with twins, and Sibayan worked on the book at “breakneck speed” with the intention of doing it “before anyone else did.” There were about 25 to 30 drafts that was written, read, and approved by teachers, librarians, United Farm Workers researchers, writers, and journalists.

“We really had a whole team pushing this book. It was not made in a vacuum between just me and [Dawn],” says Romasanta. “We really worked with Dawn’s research and really shaped [the story].”

On August 10, Mabalon was vacationing with her family in Kauai. Romasanta and Sibayan woke Mabalon up through a text message at seven in the morning to go through the last minute edits to the manuscript before it was sent to the printer.

With everything in its right place, Romasanta then mailed the manuscript to the printer. “Okay, you guys, this is it! We’re done!”

“In hindsight, that we did finish on the day that she died, we were going fast, we had to because she wasn’t going to be there,” says Romasanta.

Journey for Justice is the first in a planned series of books on Filipino American historical figures. Romasanta had proposed to do eight books, but Mabalon disagreed.

They agreed to do four books on two men and two women. They already had two men in mind: Larry Itliong and the writer, Carlos Bulosan, and one woman: the Olympic gold medalist, Victoria Manalo Draves, but they did not know who the fourth woman was going to be. 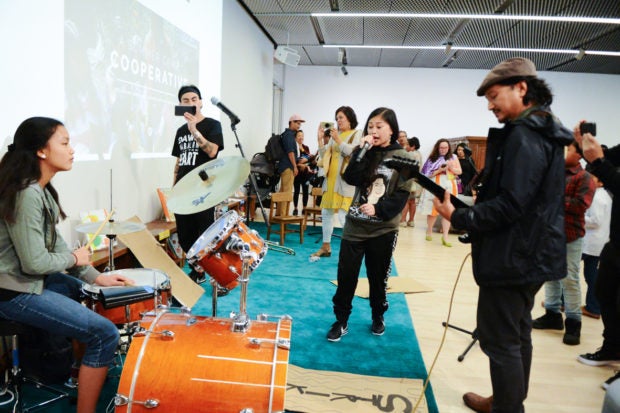 “We said, ‘Well, we’ll talk about this later,’” says Romasanta. “‘But they should be deceased.’”

The second woman in the book series will now be Dawn Mabalon.

“It’s been an unexpected journey for the most part for us,” says Romasanta.

Journey for Justice is currently available for purchase only through selected bookstores as a way to support independent booksellers. Copies are available at Bridge + Delta Publishing, Arkipelago Books in SOMA Pilipinas, California Historical Society in San Francisco, Eastwind Books in Berkeley, Little Manila Rising in Stockton, and Philippine Expressions Bookshop in San Pedro.

A yearlong book tour for Journey for Justice is scheduled in 2019.

A memorial celebration for Dawn Mabalon will be held at UCLA on January 26 followed by a book launch at Park’s Finest BBQ in LA on January 27. A national book tour presented by FANHS will have a three-day kick-off in Delano on February 8 to 10. It will go through eight states throughout the year and will come full circle at the FANHS Museum in Stockton on October 2019.

There are also plans for a theatrical production based on the book in the future.

“My big thing is really getting this into the libraries and really institutionalizing this information,” says Romasanta. “You don’t need permission to tell your story, name your heroes, and put out your books. Isn’t that a concept? To not have to beg people to publish your story? It’s really empowering. I advice more people to do it.” www.bridgedelta.com

MOST READ
usa Monkeypox: Should the world be concerned?
usa The latest on the tragic Texas school shooting that left 19 children, 2 adults dead
usa Top 10 Richest Companies in the World as of 2022
usa Fil-Am graduates with 7 trade certificates from San Diego college
usa Quo Vadis, Philippines: Part II
usa A Time to Rise, Again!
usa Ethereum co-founder warns of crypto crash – ‘Pay more attention’
DID YOU KNOW?
The Best Kindle of 2022: Which one should you buy?
A Beginner’s Guide to Buying a Vacuum Cleaner in 2022
Island Hopping in Tulum: The 12 Best All-Inclusive Tulum Resorts
How to Dispute a Debt and Win | Simple Tactics
The 12 Best Lat Exercises for Muscle Growth
Countdown to summer: tips for learning how to surf