WATCH: King Kong, the colossal beast, makes the Broadway production stand out beyond the
songs, dances and dialogue. Watching him come to life takes the
audience to a whole new level of astonishment, breaking and warming
hearts at various turns. VIDEO CLIP BY INQUIRER/Elton Lugay

NEW YORK CITY—He doesn’t speak, sing or dance, yet with expressive eyes and a powerful roar, King Kong makes audiences gasp in awe. The film legend is now a leading man on Broadway. He debuted last month to mixed reviews, but in what many consider a majestic spectacle that’ not to be missed.

At 20 feet and 2,400 pounds, the gigantic marionette that portrays King Kong is arguably the largest and most technologically advanced puppet ever created in Broadway history. His co-stars found him the most endearing non-living creature they had ever worked with on stage, never mind that it requires 15 people to operate. 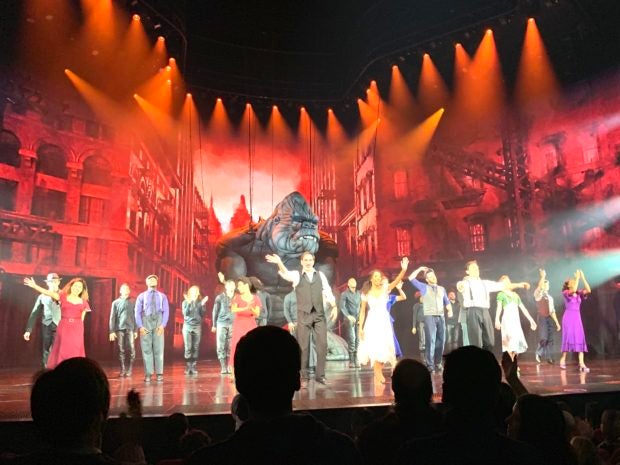 “I love him (Kong),” Pitts tells INQUIRER.net briefly after the show. She and Kong have so much chemistry on stage “because there are so many people that operate him, you sort of feel that he has this human soul. So it’s easy to attach to him because he feels almost like another human being,” Pitts says.

Co-star Morris agrees and feels no pressure “at all” working with Kong. “He’s a beautiful thing and we are going to do it together,” he says.

“He’s a really good actor, and so we learned very quickly that we had to step up our acting to match him,” echoes Erik Lochtefeld, who plays Lumpy the cook in the Broadway musical. 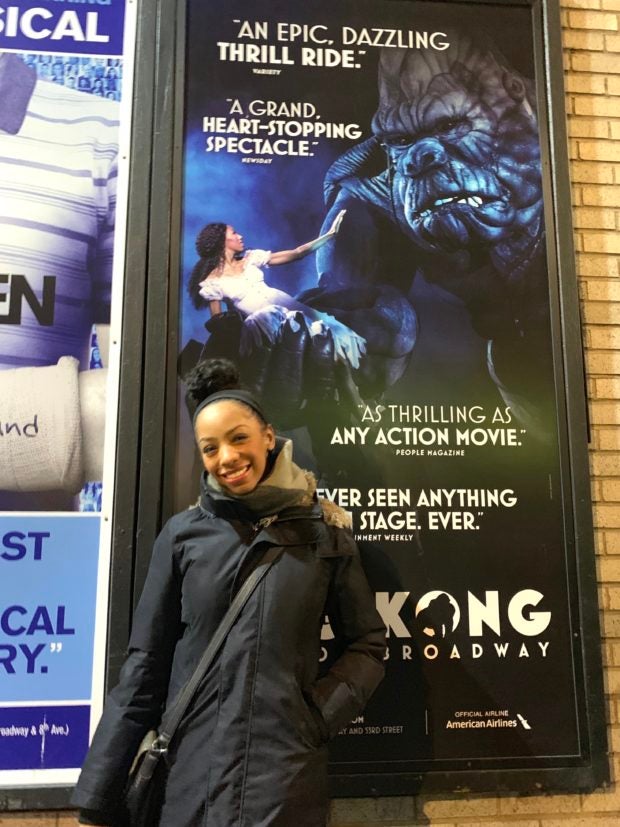 “King Kong’s face is so expressive that when you look at his eyes and hear him roaring, you forget the fact that there are so many people working so hard to bring him to life,” says Rasmin Diaz, a singer from Queens, N.Y., who thought for a second that she was inside Universal Studios in Los Angeles.

The colossal beast makes the Broadway production stand out beyond the songs, dances and dialogue. Watching him come to life takes the audience to a whole new level of astonishment, breaking and warming hearts at various turns.

“I’ve never worked with a puppet before,” says actor Casey Garvin. “Kong is a stiff competition but he’s incredible. He’s so life-like that you’d think about him as another actor. We get emotional every night watching him work. It’s incredible. There’s nothing like him in the world.”

Perhaps unknown to many, the vocal actor behind the star of Broadway’s new musical is Jon Hoche, a Filipino American. He completes the glorious experience of seeing Kong roar to life.

“It’s an incredible experience and I enjoy coming to work every day,” Hoche tells INQUIRER.net, adding that he does Kong’s roars live every single day. It was earlier expected that his roars and snarls could be automated, but the musical’s creators “quickly found that he needs to be a living, breathing entity,” Theatre Maniareported recently, quoting Hoche. 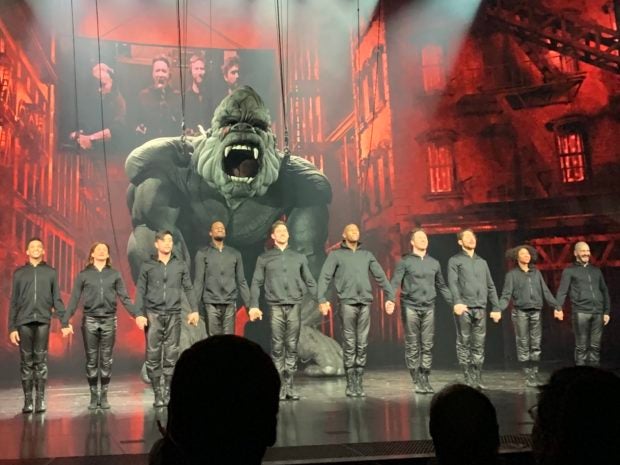 At 20 feet and 2,400 pounds, the gigantic marionette that portrays King Kong is arguably the largest and most technologically advanced puppet ever created in Broadway history. It required 15 people to bring him to life. INQUIRER/Elton Lugay

While “King Kong” is Hoche’s Broadway debut, the Fil-Am actor is not new to the stage. He’s done several off-Broadway shows including “War Horse,” “Vietgone,” “Soul Samurai,” and “Little Shop of Horrors.”

Hoche plays two other roles in the “King Kong” production. Off stage, he is among the voodoo puppeteers that use electronic remote controls to make different parts of Kong’s body move. His specific assignment is to take care of controlling head and neck motions. He also sings and dances with the rest of the cast when Kong is not onstage.

Written by Jack Thorne (“Harry Potter and the Cursed Child”), “King Kong” is currently playing on Broadway. Directed and choreographed by Drew McOnie, with an electrifying new score by Marius de Vries (La La Land) and Eddie Perfect, “King Kong” comes alive on Broadway through an innovative mix of robotics, puppetry and stagecraft.