Filipinas stand up to Trumpy behavior

Filipinas stand up to Trumpy behavior

Turns out Filipinas are the best source of relief for the Trump-weary of the world. And there’s so much that is being investigated, the guy needs an exit plan.

It’s not enough to dump the Trump Foundation that was under investigation. The big questions come out of last week’s news.  Trump’s attorney Michael Cohen gets three years and Michael Flynn will get sentenced this week. What should Trump get?

Oh, yes, let’s not get ahead of ourselves. He’s still just “Individual-1,” but there is so much out there, it’s hard to keep up with all the lies. Just ask Rudy Giuliani, charged with defending the liar of liars. 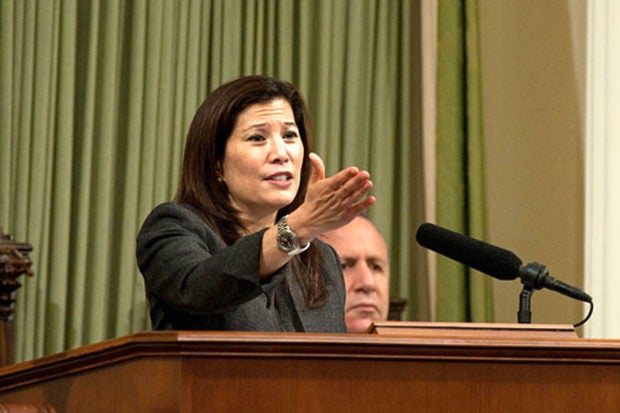 If it’s a campaign funding violation, it’s a felony. Is that the kind of person who should be the leader of the free world?

Good thing there’s lots to distract us before we get to that question.

First, there’s the health insurance issue, in which a Texas court has decided that the Affordable Care Act is unconstitutional. But it’s based on the Republicans having ended the individual mandate, which made the whole thing work in the first place. It just seems cruel to put it on the table at Christmas time, where the Trump strategy is pure scorched earth. Give everyone a lump of coal and shut down the government to boot.

Maybe that’s so we can pile up all the lumps and approximate a wall that keeps all those damn “bad hombres” out of the country?

We’re seeing the limits of an administration built on fear, and how the only thing we have left to fear are the fearmongers themselves.

Lame-duck Republicans aren’t even bothering to show up for votes, according to reports.

Why can’t they just be like Filipinas who are standing up to the man?

Filipinas leading the way
Lately, Filipinas have been shining examples of how to deal with all that ails us in public life.

Begin with California Supreme Court Justice Tani Cantil-Sakauye, the first Filipino American to serve as chief justice for the state. She announced last week she had left the Republican party, and for good reasons: For Trump, for the Kavanaugh confirmation, for everything the GOP has stood for the last few years.

While Republicans like Orrin Hatch choose to lie with the liar and support the president, Cantil-Sakauye deserves some credit for standing up to Trump and his attacks on judges and the rule of law.

“We as a branch [of government] need to defend our own,” Cantil-Sakauye told reporters.

She added: “They not only compromise our core value of fairness, but they undermine the judiciary’s ability to provide equal access to justice. I respectfully request that you refrain from this sort of enforcement in California courthouses.”

One of the guardians
Another example is Maria Ressa, the Filipina executive with the Philippine website, Rappler.

Ressa was recently named Time Magazine’s Person of the Year in a winning group of journalists that included slain Washington Post columnist Jamal Khashoggi, jailed Reuters journalists Wa Lone and Kyaw Soe Oo in Myanmar, and the staff of the Capital Gazette in Annapolis, Maryland.

They were dubbed “The Guardians” for continuing to speak truth in spite of extraordinary risks.

For Ressa, it’s about making sure the drug war and extrajudicial killings of President Rodrigo Duterte are being covered for all to see. Human Rights Watch says 12,000 people have been killed by the Duterte administration. Naturally, Trump is an unabashed supporter of Duterte and praises his actions.

But Rappler remains one of the few outlets that continues to tell the stories of how innocent people are killed by overzealous law enforcement. The Duterte government won’t give Rappler credentials to cover it,  and has even charged the site and Ressa with tax fraud in an effort to shut her and Rappler up.

It hasn’t worked. And now she’s on the cover of Time.

Miss Universe
Finally, there’s one other Filipina, who I’m sure has Trump’s ear, if not ire, Catriona Gray of the Philippines.

Her mother’s Filipina, her father is Scottish from Australia. So that makes the beauty queen what I call a “Flossie.”

But she went to college in the U.S., in Boston, and speaks English well. I don’t know if there’s much to learn from her, but you can be assured she has Trump’s attention.

Trump was likely watching the show on Sunday, as it’s the baby he once owned. Life was so much easier when he was just a rascally wheeler-dealer and not encumbered by such trifles as the Constitution and the very institution of democracy in America, the reference source of all modern democracies.

It’s really the only form of “trickle down” that works. America sets the agenda–unless it chooses not to.

It all helps explain why democracies everywhere are shakier than a pageant contestant on a broken stiletto heel. The role model, the U.S.A. is M.I.A.

So, I have to thank Miss Philippines for at the very least, putting Trump in a good mood. NBC’s SNL certainly didn’t. Trump tweeted how he wants them investigated for saying bad things about him in a Christmas sketch that imagined, “What if Trump were never elected?” Trump wasn’t joking. But SNL wasn’t really either.

But on worldwide TV,  Miss Philippines as Miss Universe, had to leave Trump yearning for those good old days. When he could walk into an area where contestants were dressing and no one bats an eyelash because he’s the oogling boss. When he can check into a Russian hotel and not think about things like hidden cameras that are waterproof.

Being president of the world’s leading democracy is a drag when you’re a despotic lecher at heart. That idea should be sinking in now, let’s hope. Trump needs to understand he’d really rather watch beauty pageants than read his daily briefing book.

I have to imagine he was watching Gray and the LGBTQ contestant, Miss Spain, on Sunday and wishing for a return to private life. Where he belongs, in his room alone, free to tweet to his heart’s content. And no one cares.

That would be the simplest course. If he would just go away.

Abdicate the throne. That’s what cornered kings do after all. And then we can do what he and Giuliani and all those bad Republicans want, to forget about justice and the rule of law and forget this period between 2016 and now ever happened.

It was just a pile of lies.

Impeachment is too good a word for a man who doesn’t understand democracy. But abdication? A kingly way out. That would definitely make Trump a president the likes of which the world has never seen.

And the sooner the better. And if he doesn’t quite understand that “A” word, here’s another word: asylum. And another. Exile.

I’m sure there’s a $50 million condo in Russia with his name on it. Now that’s an exit plan, everyone would love.

Emil Guillermo is an award-winning journalist and commentator, and a columnist for the Inquirer North American Bureau. Twitter @emilamok.  Listen to his Emil Amok’s Takeout on Apple Podcasts.