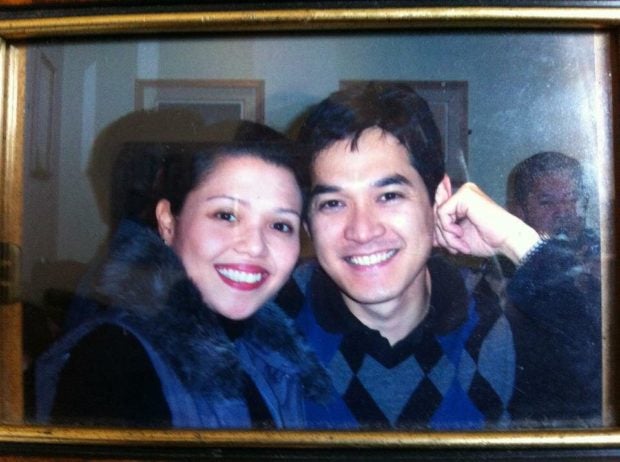 Klu and Angelo celebrate Christmas together in London December 2002. CONTRIBUTED

WASHINGTON, DC — Before finally settling in America in 2003, Klu Ann Cabaron and Angelo Descalzo were destined to meet in London. But it took a few detours around the world before the couple locked eyes in an operating room at St. Mary’s Hospital. Both wearing scrubs on that fateful September day in 2001, the 28-year-old nurse from Cebu admitted later that the 34-year-old “handsome and funny man” from Zamboanga stole her heart, sealing their fate forever.

Klu had just arrived in London. Reporting for work at St. Mary’s, she was told she had to go to orientation. She didn’t see the point of doing so. Since passing the 1995 Philippine Nursing Licensure Exam as Board top-notcher, she’s had four years of experience already working as an ICU nurse in New Zealand (including winning the Nurse of the Year award) and two years in Australia.

But when she was told another Filipino nurse was giving the orientation, she got curious. So, she said, “Cool.” She waited for the person inside OR. Soon as he entered, “Our eyes locked for a few seconds, but it seemed like minutes,” Klu recalls. He extended his hand and said, “Hi, I’m Angelo. Taga saan ka sa atin?” (where are you from in the Philippines). Cebu, she replied. “Gwapa talaga mga Cebuana” (ladies from Cebu are beautiful). “I smiled and started to feel some sparks, but I managed to stick with the routine, all the while wishing time would slow down,” Klu recalls.

“It felt like we had known each other long. There were moments when we caught each other flirting even as I tried with clinical detachment to get familiar with the surgical instruments, cushions and positioners.  Each time we exchanged glances, the silence throbbed with anticipation, disrupting my concentration. It was becoming increasingly obvious we liked each other already.” 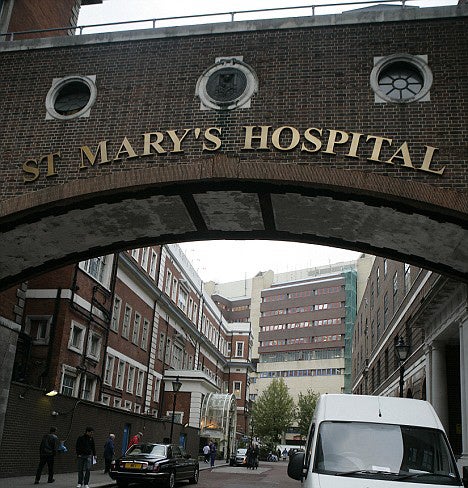 St. Mary’s Hospital in London where Klu and Angelo met before eventually immigrating to the U.S.

Klu did not want that day to end. After five hours together in surgery, she went back to her station at ICU with these thoughts: “I felt like my entire world just flipped. He smelled so darn good that his scent lingered for a while. I could close my eyes and savor the short time I spent with him.

The encounter at OR led to a first date. And many dates afterwards. She bailed out on one date because she had gotten ill suddenly and had to stay in bed. But that didn’t stop Angelo. He showed up in her apartment carrying bags of groceries. “I will cook anything you want,” he said. “I will make sure you have enough food for the week.” Torn between emotion and reason, she had to ask: “Why are you doing this, I’m not your girlfriend.” His reply was epic. “Ever since I met you, nobody else is worth thinking about. I have never been so certain of who I want to be with until I met you. I will be your husband one day. I promise I will take care of you. I will love you like no other.”

Angelo did become Klu’s husband a year later, following a long-distance relationship as Klu had to leave London to report for work at the Medstar Washington Hospital Center in Washington, DC. Angelo was hesitant to come to America, preferring UK’s more leisurely pace. So, every three months, they alternated flying to and from Heathrow and Reagan airports, heating up the phone lines in between visits.

In 2003, they married finally in Arlington, Virginia, where they’ve lived with 13-year-old daughter, Bianca. That same year, while working at Medstar’s ICU at night, she went back to grad school as a full-time working student. She graduated from the University of Maryland School of Nursing with a double major as an Acute/Critical Care/ER Nurse Practitioner and Clinical Nurse Specialist. While still in the UK, Angelo also achieved his graduate studies in nurse anesthesia at the University of Wales School of Medicine.

After 13 years with the Washington Hospital Center, Klu moved to Kaiser. She is now a Cardiology Certified Registered Nurse Practitioner in DC and Maryland, and a fulfilled wife and mother. Angelo, who specializes in sports medicine, also works at Kaiser as a Peri anesthesia nurse.

To Klu and Angelo, working in foreign lands in pursuit of their dreams had its challenges and charms. Destiny’s detours were actually blessings in disguise. And now that they’ve made America home, even as they aspire to become better professionally, they continue to be healers and care-givers outside their hospital scrubs and “live a life in service to others.”

Both Seventh Day Adventists Christians and active members of various community and charitable organizations, Klu and Angelo are invested in helping those in need, especially abandoned kids. “What the eyes can’t see, the heart can,” Klu says, “There’s so much that needs to be done.”