Founded in 1871, the Salmagundi Club (the word “Salmagundi,” which means a meat salad dish, is believed to be of French origin) has a membership of about 850 artists and art lovers. It is located at 47 Fifth Avenue in Greenwich Village and registered in the National Registry of Historic Places. 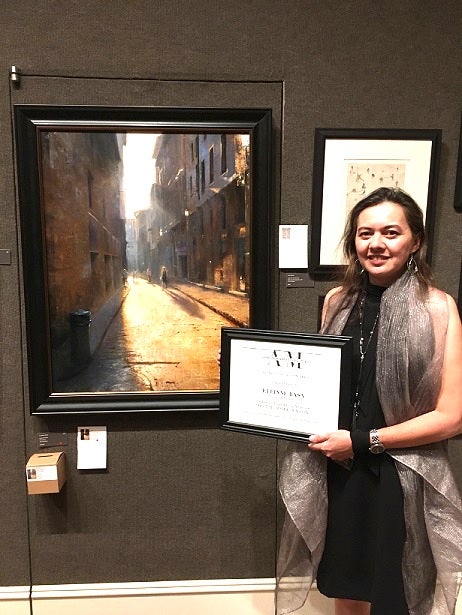 Artist D. Eleinne Basa: A love of painting that started when she was 7 years old. CONTRIBUTED

The American Masters Show was started 10 years ago, and is an annual exhibition of the works of nationally recognized artists who are invited to exhibit their work in New York City for fundraising and exposure to local artists and patron members.

Eleinne Basa was totally caught by surprise when during the Oct. 13 Gala and exhibit opening, Tim Newton, chair of Salmagundi Club and founder of the show, announced that her work “Luce Di Firenze” (Light in Florence) was the winner of Artists’ Choice, voted by the 68 artists who participated in the show.

It has been a long way to that success.

Her love of painting started at 7 years old when her aunt gave her Color by Number sets and sketch books. Her mother, seeing the love of drawing in her daughter, enrolled her every summer until high school with artist Fernando Sena at the Children’s Museum and Library Inc. (CMLI) to further develop her artistic talent.

Eleinne remembers that Sena taught his young students college-level classical painting by starting them with painting objects, the contrast of light and shadows, using charcoal. Only when he felt that the students had some mastery of the technique of rendering objects did he start to teach them painting with colors. 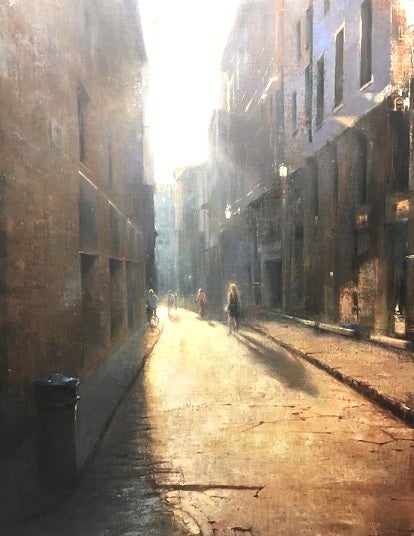 Her love of painting brought her to work at the Genesis Art Gallery in Megamall in Manila after college. There, she met other painters, among them the celebrated artist Onib Olmedo who encouraged her to continue painting and learning.

In 1993 she married Ateneo basketball star Mel Basa. In 1994 they moved to the U.S. because Mel worked for an IT company, which sponsored their immigration. The children came soon after: Justine in 1995 and Tyler in 2000. Eleinne was busy raising the children, but she always found the time to paint as a hobby.

When their children grew old enough to go to school by themselves, Eleinne started to go to workshops to learn landscape painting and learned to paint outdoors, a method called plein air. Her style started to change.

She continued to submit to galleries and art competitions only to be rejected again and again. She was getting disheartened that she contemplated pursuing other interests and putting painting on hold. It was Mel, her husband, who told her not to worry about the rejections and lack of sales. “You are good. Just keep on painting,” he said. Mel gave her confidence and she continued to paint and to join art competitions.

Eventually she started to get into group shows and win some awards. One of her first awards was two Honorable Mentions in Plein Air Easton in Maryland. It was in these arts events that she started to meet very good artists who became her friends and mentors.

She loves to learn more, know more, and experience more. She continued to paint to become better, to have satisfaction because she saw that she was getting better. Her big break came when her painting “Afternoon Light” was adjudged winner of the $15,000 Grand Prize award for the Online Plein Air Salon hosted by Plein Air Magazine, making it the cover story in June 2012.

With this success, galleries in Wyoming, Montana, North Carolina, New Jersey, and Pennsylvania started to invite her to exhibit, as the Plein Air movement was becoming more and more popular among art collectors. She continued to receive awards and invitations to shows like the Gold Medal Show by the California Art Club in Los Angeles, where she won an Award of Excellence.

Last October, she was invited by Tim Newton of the Salmagundi Club to be part of the American Masters Show and Sale. She already had three paintings submitted and was reluctant to submit the “Luce di Firenze” because she was still working on it.

Her husband encouraged her once more because he saw that her style had evolved, that the reflection of the setting Italian sun was exceptional on her canvas. Eleinne worked until four in the morning to finish the painting and voila, it was the painting that garnered the most votes from her fellow artists in the show.

It was a great honor for an emerging FilAm artist and for the Filipino American community. Watch Eleinne because it is only the beginning. © The FilAm 2018