Outgoing Mayor Juslyn Manalo, the first Filipina Mayor of Daly City, graciously stepped down from her role and highlighted the City’s many accomplishments in 2018, such as the passing of three local ballot measures to sustain public services, the strong response of the City Council to unfortunate racial incidences through the “Love Not Hate: Celebrating Diversity Together” event, a successful Make A Difference Day featuring six community cleanups and the planting of native trees, and a continued commitment to providing more affordable housing recently with a new Inclusionary Housing Ordinance. Manalo thanked the community, and her family, for the opportunity to serve Daly City as Mayor. 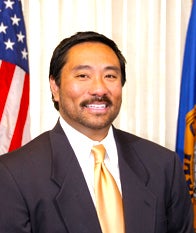 Former Councilmembers Judith Christensen and Michael Guingona opted to not seek another term. Christensen was first elected in 2004 and again in 2014, serving a total of two terms. Guingona was the first Filipino American elected to the City Council in 1992 and served on the City Council for 25 years, with multiple terms as Mayor.

Assemblymember Phil Ting, the office of Congresswoman Jackie Speier and County Supervisor David Canepa presented commendations to outgoing Councilmembers Guingona and Christensen. State Senator Scott Weiner also offered his thanks for their service and his hopes to work with Daly City’s new City Council in the future.

The City Council Reorganization featured a performance of the Star-Spangled Banner by Janelle Cansino Feraro, a local youth, as well as a special performance for Andra Day’s “Rise Up” by singer Farida Fajardo, with Maximillian Buenaventura, the Mayor’s son, playing the keyboard. Max also performed a solo rendition of “Hey Jude.” The event was lively this year, with many youth and community members filling the City Hall rotunda.

Mayor Buenaventura was first appointed to the City Council in April 2011, to fill the unexpired term of former Councilmember Maggie Gomez. He was subsequently elected to the City Council in November 2011 and re-elected in November 2014. He has previously served Mayor in 2013 and 2015 and Vice Mayor in 2012 and 2018. Buenaventura has practiced law for over 20 years, runs his own practice in Daly City and serves on the Board of Directors for a variety of nonprofits. “I am excited to serve all the people of Daly City as Mayor and City Councilmember. We are united as a people and we can do this job together as a people, to build a better Daly City for everyone,” Buenaventura said.