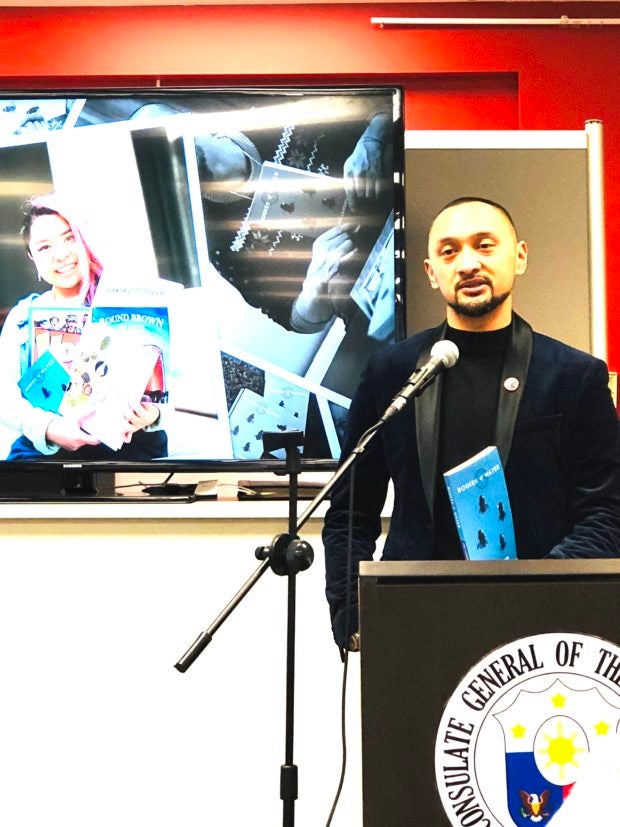 Yves Lamson says his book is a tribute to his parents and his heritage. INQUIRER/Marisa Roque

TORONTO — How do Filipino Canadian youth deal with having to live as products of two realities?

Judging by the energy of the group gathered at the Philippine Consulate General the evening of Dec. 7, these young Filipino Canadians were ready to grab at their chance at airing their points of view.

The event, sponsored by Sentro Rizal Toronto, was the launching of Bodies of Water by Yves Lamson, a writer based in Stouffville, Ontario.

In Bodies of Water, Lamson aims to “preserve the intangible histories of the Philippine oral tradition.”  He interweaves the characters of Philippine lower mythology like tiyanak, tikbalang, aswang, and so on, merging folktales spawned by his imagination with the tales his father told him when he was young. 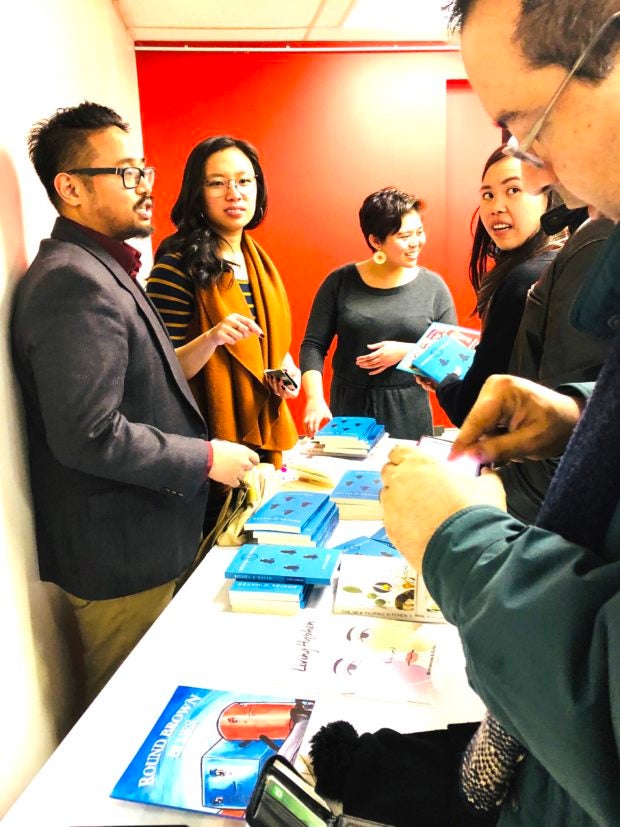 “The Philippines are bodies of water, and so are we–following the lives of four generations of women with an innate ability to speak to water. Bodies of Water straddles the border between reality and magic,” stated Lamson.

The  excitement at the launch was not solely for Lamson’s work. He has opened the event to the members of the Pluma Collective, a nascent group of young Filipino Canadian writers who are spearheading a literary movement based on the “adventures” of being living hyphens–straddling the reality of being a Filipino in a multicultural Canadian society.

This refreshing attitude of inclusiveness permeated the launch.  After Consul General Rosalita Prospero welcomed the assembly, Yves Lamson and Jennilee Austria, who emceed the program, introduced the writers of the Pluma Collective. 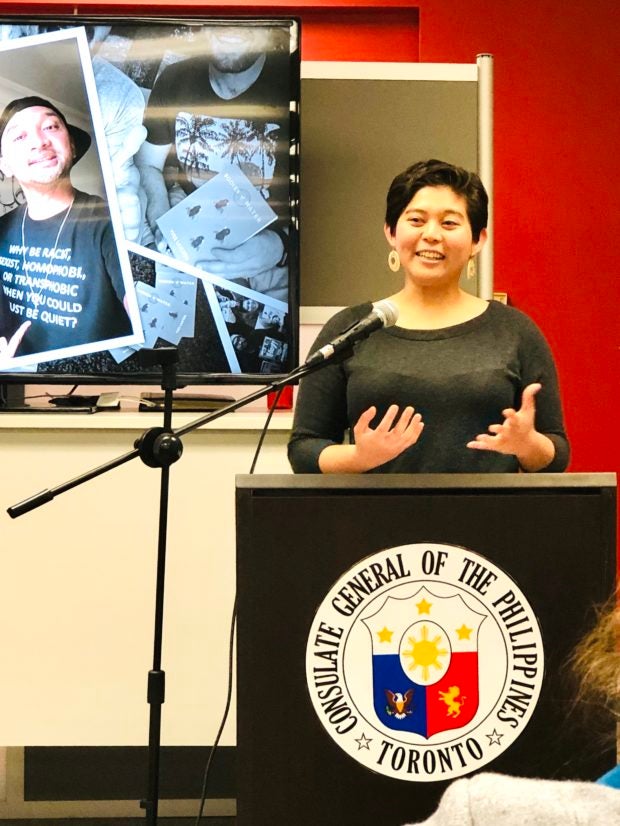 Austria’s Filipino Talks about Filipino experience in the diaspora has been featured on “Dual Citizen,” a documentary series that deals with tensions in immigrant family reunifications, and the culture clashes and generation gaps that ensue. The documentary has garnered thousands of views.

Nastasha Alli, a food and travel writer, read her portion about “pansit palabok” from the book The New Filipino Kitchen: Stories and Recipes from Around the Globe. Alli shared a morsel from her section:  “Cooking palabok from scratch in Canada, like making a home thousands of miles away from my original home, is not without challenges.”

Edited by Jacqueline Chio-Lauri, with photography by Rowena Dumlao-Giardina, the compendium of recipes shared the pages with stories of lives enriched by the rituals of cooking passed from parent to child. 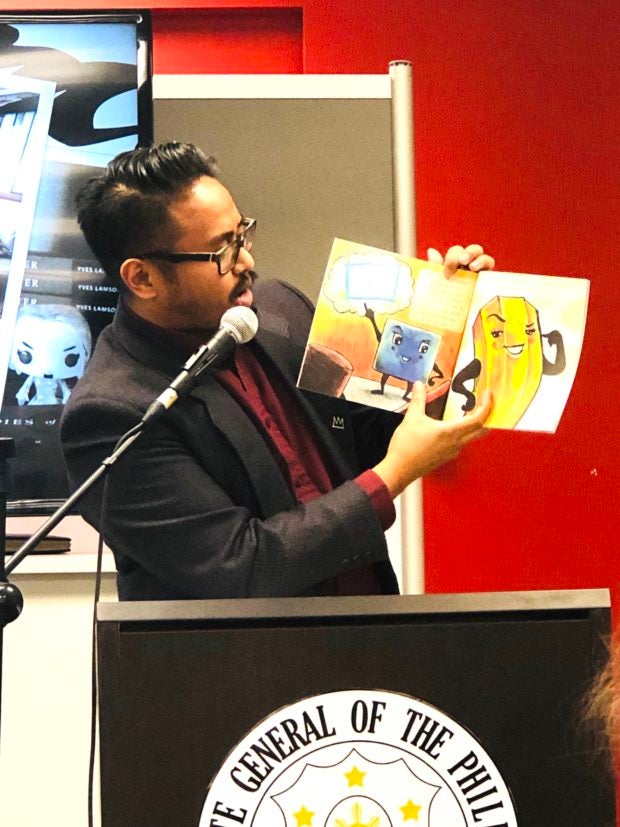 Eric Tigley reads his fable on how it is a struggle to fit in. INQUIRER/Marisa Roque

Justine Abigail Yu, the founder and chief editor of Living Hyphen, Expressions of the Hyphenated Identity, presented the first issue of the publication.  She shared that the “seed…was born all the way back in the fall of 2015 when (I) attended a powerhouse panel about (the lack of) diversity in Canadian literature—panelists, all writers of color, talked about the difficulties they faced in getting their work published, simply because their stories did not conform to the ‘Canadian narrative,…or their stories weren’t ‘ethnic’ enough.”  Yu added, “As a writer and as a woman of color, this deeply unsettled me.”

“That’s why Living Hyphen was brought to life–to reshape the mainstream and to add nuance and complexity to the Canadian Experience,” claimed Yu.

Rachel Chiong recited her poems of growing up as a Filipino within a multicultural society, wondering about her place of where she begins and where she ends.  Her verses became even more poignant recited against the background of Jon Catanus’s guitar playing. 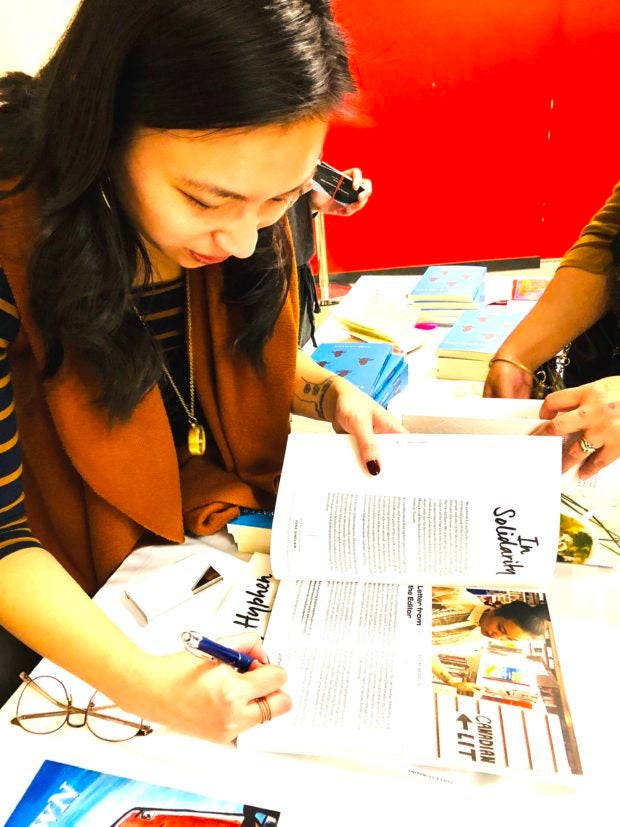 To cap the evening, Lamson gave the background of why and how he wrote the book, dedicating it to his parents, Wenifrida and Noel Lamson.  He said that seven years ago, on December 7, he suffered a massive heart attack, and he took the path of “writing toward recovery.”

An only child, Lamson credits his father’s strength as a storyteller as the inspiration for his book.  “I was afraid of losing the stories of my youth.  We have a culture that has a strong oral tradition, and we cannot let that go,” he added.

A book sale and signing, followed by a reception brought the evening to a close.