LOS ANGELES — As the end of 2018 approaches, expect to see a lot of “best of” lists. One such roundup that Angelenos look forward to is the Los Angeles Times’ ranking of the city’s top 101 restaurants.

With the passing of restaurant critic Jonathan Gold this summer — whose annual 101 list became a bucket list of sorts for foodies — the Times’ food writers Jenn Harris, Andrea Chang and Amy Scattergood took Gold’s list from last year and “tried to introduce the new and fill in the gaps where appropriate to reflect the city as a whole.”

“We did our best to honor Jonathan’s legacy and keep the ideas he championed in our minds, thinking about diversity, equality, deliciousness and the stories behind the plates of food before us.”

Instead of ranking the restaurants, this year’s list is unnumbered, alphabetized and categorized by neighborhood. 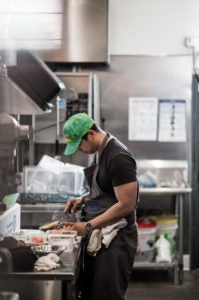 One newcomer is Filipino-American chef Charles Olalia’s Ma’am Sir, which opened in Silver Lake in June.

Olalia — whose fine dining background includes stints at Patina, The French Laundry and Restaurant Guy Savoy — envisioned a restaurant based on “party and beach fare” and comfort food dishes he grew up eating back in the Philippines.

“Think of Ma’am Sir not so much as the latest of L.A.’s new wave of wonderful Filipino restaurants but as the triangulation of chef Charles Olalia’s career,” Scattergood writes in her review of the restaurant.

The menu highlights include lumpia Shanghai (stuffed with shrimp and lardo sausage and topped with sea urchin) and shrimp deviled eggs (palabok-egg salad and celery hearts). There are takes on kare kare, sisigand grilled bangusas well. 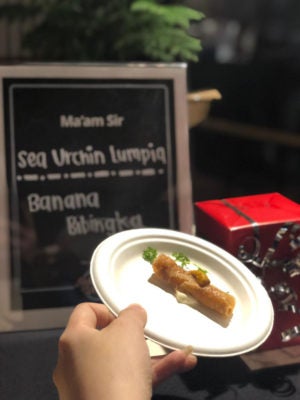 “Every time I open a restaurant, I always want to create a community,” Olalia told the Asian Journalin a previous interview. “I’d love for people to make us part of their lives.”

The praise for Ma’am Sir has also included a place on Eater’s “18 Hottest Restaurants in LA Right Now” and a four-star review from TimeOut.

Ma’am Sir is open six days a week (closed on Tuesdays) for dinner service and also features a full-service bar with specialty cocktails. 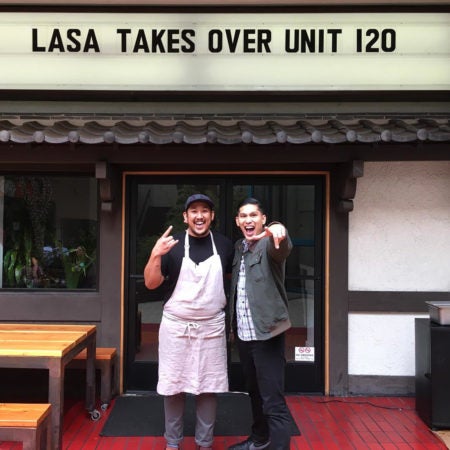 Retaining a spot on this year’s list is Chase and Chad Valencia’s LASA, which held the No. 18 spot in Gold’s ranking in 2017.

Scattergood remarks that the brothers’ outpost in Chinatown “feels lived in [with] a comfortable dining room” and that “Chad’s cooking has evolved with the restaurant” by introducing Filipino dishes from a second-generation, Californian perspective.

“Imagine family cooking from a test kitchen, the flavors exacting, the end result addictive,” she adds.

Gold had dined at LASA several times since the former pop-up found a permanent home in Chinatown’s Far East Plaza in 2016.

Gold wrote back then, “But nobody has quite caught the spirit of modern Pinoy cooking like Lasa, named after the Tagalog word for ‘taste.’”

“So what seems to be a simple bowl of pancit noodles becomes a complex composition balancing butter, a bit of fragrant calamansi lime juice, and shavings of egg yolk that has been cured with patis, the strong Filipino fish sauce…it’s less street food than an umami-rich Filipino wink at spaghetti carbonara,” he wrote.