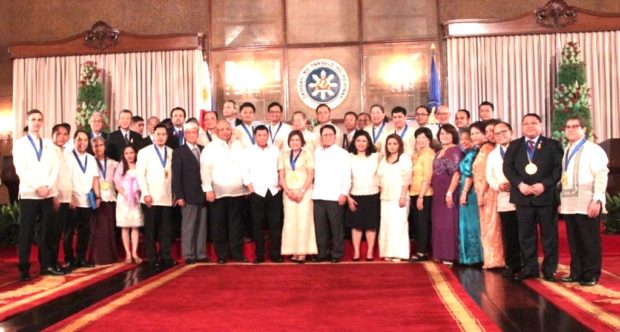 The Office of the President has approved the list of honorees submitted by the Commission on Filipinos Overseas (CFO) as recipients of the 2018 Presidential Awards for Filipino Individuals and Organizations Overseas. President Rodrigo Roa Duterte will lead the award ceremony.

The awardees come from 12 countries and territories and went through a four-stage selection process involving multi-sectoral representation.

Institutionalized in 1991 through Executive Order No. 498, the Presidential Awards is a biennial search for individuals and organizations based abroad who have dedicated their work in the service of Filipinos either by selflessly supporting relief, rehabilitation and development programs in the home country, or by having excelled in their profession or field of expertise overseas.

This year’s awardees were selected from a total of 96 nominations received by the CFO from 28 countries through 37 Philippine Embassies and Consulates across Asia, North and South America, Africa, Europe and Australia.

The awardees were thoroughly screened by four different committees from the Philippine Foreign Service Posts, an inter-agency Technical Committee, a multi-sectoral Executive Committee and, finally, by the Office of the President.

The Banaag Award is conferred on Filipino individuals or organizations for their contributions that have significantly benefited or advanced the cause of overseas Filipino communities.

The Banaag awardees are:

The organization supports development-oriented projects in partnership with the public and private sectors by mobilizing resources for the education of underprivileged children and economic empowerment of local communities in the Philippines.

The Pamana ng Pilipino Award is conferred on Filipino overseas, who, in exemplifying the talent and industry of the Filipino, have brought the country honor and recognition through excellence and distinction in the pursuit of their work or profession.

The Pamana ng Pilipino awardees are:

The LINKAPIL Award is conferred on Filipino individuals or organizations for exceptional or significant contributions to the reconstruction, progress and development of the Philippines.

The Kaanib ng Bayan is conferred to foreign individuals or organizations for their exceptional or significant contributions to Philippine reconstruction, progress and development, or have significantly benefited a sector or community in the Philippines, or advanced the cause of overseas Filipino communities.

The Kaanib ng Bayan awardees are:

For the past 27 years, the awards have been bestowed upon 460 Filipino individuals and organizations overseas from 51 countries and territories.

The Presidential Award is organized by the CFO (www.cfo.gov.ph), an agency under the Office of the President tasked to promote and uphold the interests, rights and welfare of overseas Filipinos, as well as to maintain strong and mutually beneficial ties between overseas Filipinos throughout the world and the motherland.