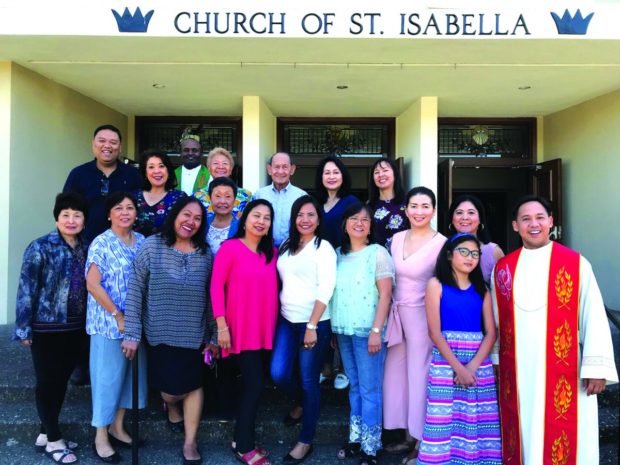 The Church of St. Isabella in San Rafael, California is among the congregations holding Simbang Gabi. CONTRIBUTED

SAN RAFAEL, California — Filipino-Americans in Northern California will hold a five-day “Simbang Gabi” advent Masses from Dec. 17 to 21 at the Church of St. Isabella, One Trinity Way in San Rafael, California.

This is the 10th year this Filipino religious tradition is held in St. Isabella parish. It is also held in various cities in the Bay Area, like Daly City, Vallejo, Concord, Antioch, El Cerrito and many parishes in the Archdiocese of San Francisco.

Simbang Gabi was first introduced in 2009 by Fr. Feliciano Mofan and Fr. Alner Nambatac of St. Isabella parish as a deep-rooted Filipino Christian tradition. The Latinos have their Posada, the Western countries have their Santa Claus, and the Filipinos have Simbang Gabi.

The theme for this year of Simbang Gabi is: “Strength in Faith Through Christ.” Emmanuel and Kit Aquino, husband and wife team, are coordinators of this year’s organizing committee.

In the home country Simbang Gabi is a series of 9-day early morning masses that start on December 16 and culminate on Christmas eve. It is when Catholic churches start to open their doors shortly before the break of dawn to welcome the faithful to attend the mass. It is also known in Spanish as Misa de Gallo, or “Mass of the Rooster” so-called because it is the time early in the morning when the rooster flaps its wings and starts to crow, and some farmers start going to the field, like my father in the homeland. It is also called Misa de Aguinaldo, “Mass of the Gift” who is Jesus Christ, God’s gift to humanity.

In the United States, or elsewhere in the world where there are colonies of Filipinos, Simbang Gabi, as the name implies, is celebrated in the evening in order to accommodate the needs of members of the community who have different work schedules.

No matter how and when this celebration is held, the Simbang Gabi provides an indication of the depth of the Catholic faith among Filipinos who constitute about 85% of the 105 million population, the third largest Catholic population in the world behind Brazil and Mexico.

It is also an expression of sacrifice and dedication for Filipinos because it takes an amount of will and discipline to get out of bed so early in the morning, especially in the East Coast when they shiver in the cold, to go to Church in a dire wish to obtain special graces.

This tradition was introduced by the Creole friars in the Philippines in the 16th century. It manifested the devotional heritage of the Spanish friars sent to Christianize the Philippines, then a pagan country when Magellan, a Portuguese navigator under the employ of the Queen of Spain, discovered it in 1521. The seat of Christianity started in the island of Mactan in Cebu.

The Catholic clergy in the Archdiocese of San Francisco, which includes Marin county, headed by Archbishop Salvatore Cordileone, D.D., acknowledges the ever presence of Filipinos in Church services. Filipinos are vital cogs in parish activities, especially during Advent. Church activities are vibrant and alive because of Filipino parishioners who bring with them their deeply-rooted Christian belief. They are avid altar servers, Eucharistic ministers, lectors, choir members, collectors, greeters.

Fr. Mark Reburiano, pastor of St. Isabella Church, is inviting the faithful in the North Bay Area to prepare the Lord’s coming. Simbang Gabi has become one of the major cornerstones of community building for Filipinos in the United States.

The Filipino-Americans of Northern California Organization (FANCO), who live in Marin, Sonoma and Solano counties are preparing for the “noche buena” on December 21 that will include Filipino delicacies, such as lechon, adobo, menudo, pancit, and drinks of salabat.

Filipino Consul General Henry S. Bensurto, Jr. of San Francisco and his staff are invited to attend the affair and grace the noche buena to be held at the parish hall.

The Simbang Gabi Mass starts at 7 p.m. preceded by a Rosary and confessions. For inquiries call St. Isabella parish at 415-479-1560.