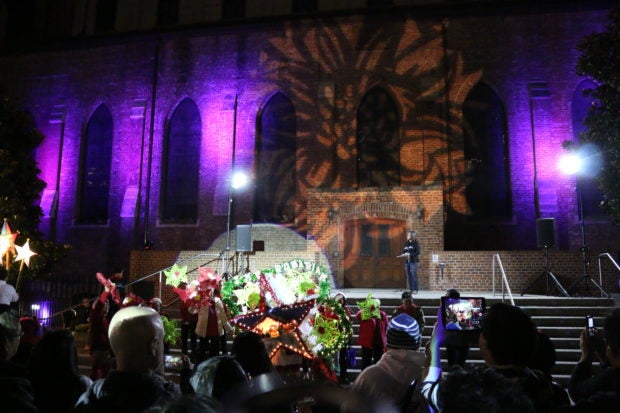 SAN FRANCISCO – The quintessential Filipino symbol of hope, blessings, luck, and peace for the holidays, the parol lantern lights up Filipino homes and establishments throughout the world. This year, the 16th annual Parol Lantern Festival will lightup SOMA Pilipinas, the Filipino cultural heritage district, on Dec. 8 from 5 p.m. to 8 p.m. at Jessie Square, Yerba Buena Gardens, and St. Patrick’s Church.

“The Parol Lantern Festival is a beautiful annual celebration of culture, community, and light that has become a beloved tradition in the Yerba Buena neighborhood. We look forward to it every year!” says executive and artistic director of Yerba Buena Gardens Festival, Linda Lucero.

Presented by the Filipino American Development Foundation (FADF), Bayanihan Community Center, and Kularts, the theme of this year’s festival is “A Gathering of Lights”—a testament to and in honor and celebration of the resilience of Filipino leaders, youth and student groups, and families who have been facing political and economic challenges for decades in San Francisco and the Bay Area.

The all-ages and free event consists of highlights that have been part of the festival for years. 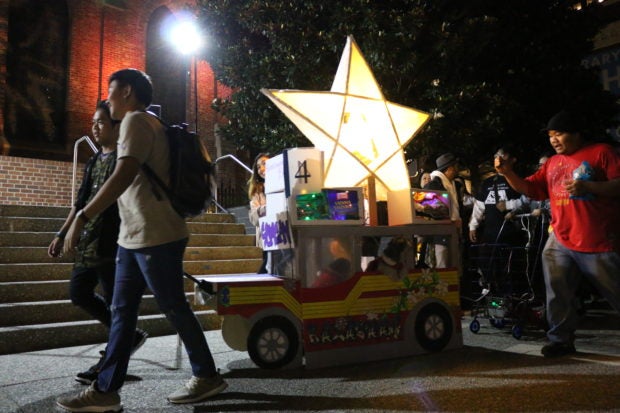 A parol lantern creation by SOMCAN at the 2017 Parol Lantern Festival. ERINA ALEJO

There is the Parol Strollwhere community members and festival contingents parade their lighted and colorful parol lantern creations from Jessie Square to Yerba Buena Gardens and back. The large-size handmade parol lanterns vie for the annual Tala Awards with $500 in cash for the grand prizewinner.

A series of workshops on how to make a parol lantern are held on Fridays in October, November and December at the Bayanihan Community Center with online registration available on the festival’s website.

Around the venue are a variety of live musical performances by local artists: the American Center for Philippine Arts Rondalla group strumming Philippine folk music; Autonomous Region with its eclectic fusion of Philippine gong music and jazz; CryWolffs with his take on contemporary tunes on an electric violin; and Joshua Icban and Aimee Amparo with their special rendition of holiday songs as well as a selection of kundimansongs from the Philippines.

An added highlight to this year’s event is a community-wide dance performance called Sayaw sa Ilaw (Dance of Lights) inspired by the traditional Philippine dance Pandanggo sa Ilaw, performed by Kariktan Dance Company, Little Manila Dance Collective and Parangal Dance Company with choreography by master choreographer Sydney Loyola. Community members and festival attendees are encouraged to join the performance and can learn the choreography through a video tutorial found on the festival’s website. 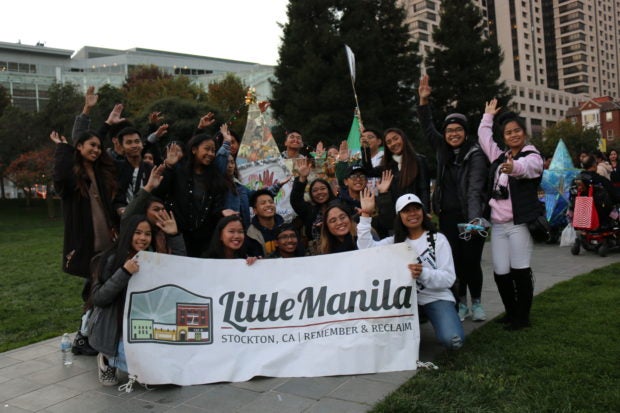 Contingent from Little Manila of Stockton at the 2017 Parol Lantern Festival. ERINA ALEJO

A gallery featuring a variety of parol lanterns on display at Jessie Square includes seven fiberglass lanterns from San Fernando, Pampanga—birthplace of the parol lantern festival.

This year’s big highlight is theTaste of Pilipino Christmas happeningat the Social Hall of St. Patrick’s Church—a free sampling of various Pilipino sweets and delicacies that are staples during the season that began on the festival’s 14thyear in 2015.

Among the traditional kakaninand delicacies served courtesy of local community chefs areChamporado with Tuyo Flakes(chocolate rice pudding with dried fish flakes) and Arroz Caldo(ginger flavored rice porridge with chicken) courtesy of Rosie Drapiza, the resident chef of St. Patrick’s Church and a Taste of Pilipino Christmasregular since its inception; Señorita Bread(sweet rolls) courtesy of the popular Chinese Filipino restaurant in the Peninsula, Ling Nam;Sumang Kamoteng Kahoy(sweet cassava wrapped in banana leaf) courtesy of Tess Cruz, who caters to the community and sells her delicacies at the back entrance of St. Patrick’s Church on Sundays; Bibingka(sweet rice cake garnished with egg, milk, and shredded coconut) 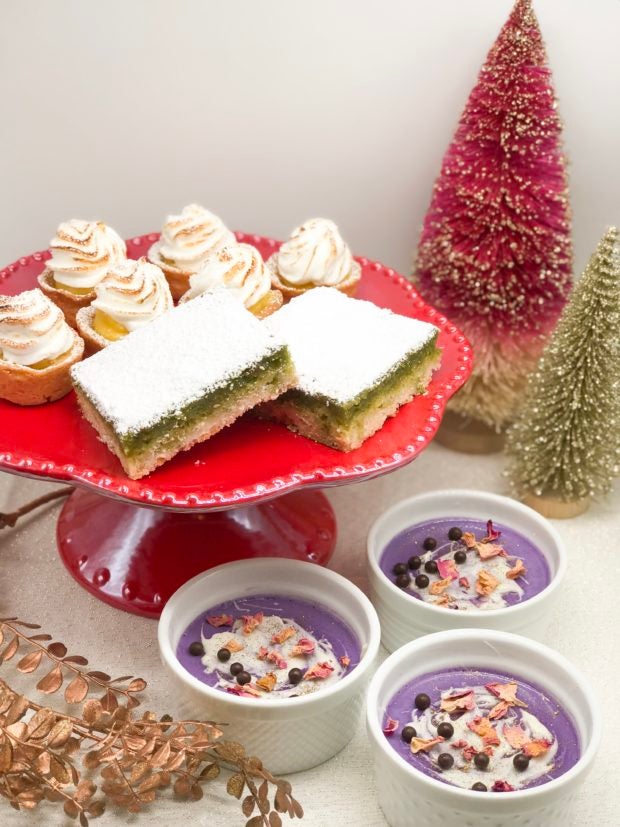 and Carioca (deep fried rice & coconut meat donut)courtesy of Ed Quiambao, owner and chef of Kababayan Restaurant renowned for its Kapampangan cuisine; Maja Blanca(coconut pudding with sweet corn) courtesy of JT Restaurant located at the Mint Mall along Mission Street; Panara Pampanguena (stuffed crisp-fried pastry) courtesy of Atty. Amancio “Jojo” Liangco, a seasoned immigration lawyer in San Francisco and a renowned amateur chef of Kapampangan cuisine who is a passionate advocate of slow food movement;Boboto(savory Pampangueño tamales) courtesy of Salvador Cunanan, a native of Cabalantian, Bacolor, Pampanga renowned for its boboto, who is also demonstrating the making of this unique delicacy.

Part of this year’s Taste of Pilipino Christmaslineup is an offering of special commissioned Filipino desserts that are modern creative twists inspired by the traditional kakanin.

The annual Parol Lantern Festival is essential to the inception and creation of SOMA Pilipinas and an integral part of the history of the Filipino cultural heritage district.

It began in 1997 with the rehabilitation of the Delta Hotel on the corner of Mission and 6th Street that had burnt down. Dr. Mario Borja, who then owned the entire building, sold it on the condition that it would be renamed the Bayanihan House that would provide affordable housing as well as services and space to the Filipino community. 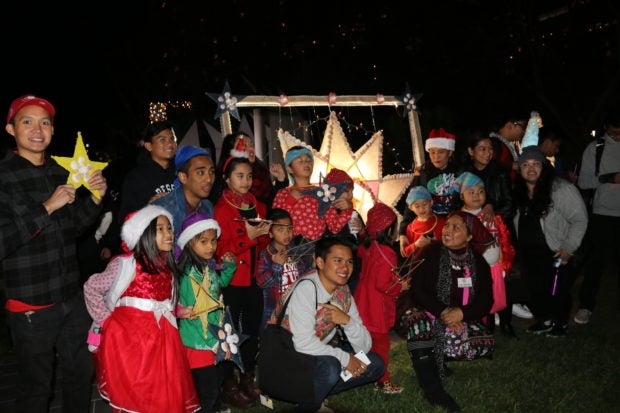 Part of the deal was the construction of the Bayanihan Community Center, a cornerstone of the community that was an initial step in reclaiming a neighborhood where Filipinos hold over a century of history yet were undervalued.

In July 2003, FADF and Bayanihan Community Center Director Bernadette Borja Sy approached Community Historian and Parol Lantern Festival Founder MC Canlas about putting up an event in celebration of the opening of the community center as well as a way to galvanize the various sectors that make up the Filipino community in the neighborhood.

Canlas, a native of San Fernando, Pampanga, suggested a version of the annual holiday festival that was held in his hometown and the Parol Lantern Festival in San Francisco was born. 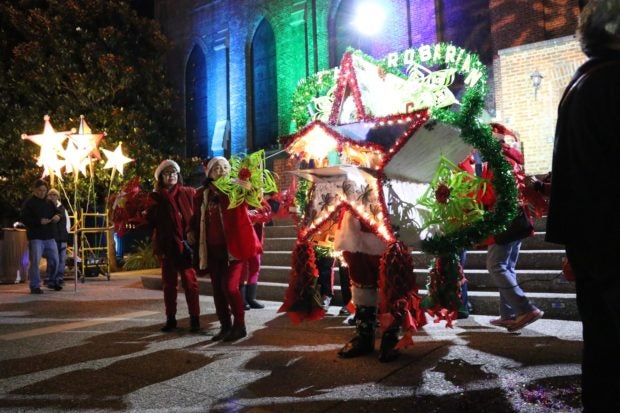 Representatives of the Veterans Equity Center with their parol lantern at the 2017 Parol Lantern Festival. ERINA ALEJO

“It became a uniting force for the different organizations to come together one day a year and showcase their own strength and community,” says Canlas.

With the establishment of the Filipino cultural district in 2016, the festival continues to light up the neighborhood as a testament to the resilience, strength, and spirit of a community whose history and value are indelible in the social and cultural fabric of the city and on American life.  “The Parol Lantern Festival,” says Borja Sy, “is symbolic of our Filipino culture visibly celebrated in our new home in the U.S., SOMA Pilipinas.”