Immigration: A Cain and Abel saga

Immigration: A Cain and Abel saga

Right after the midterm elections, when the Democrats regained control of the House and signified an increasing rejection of Trump and his erratic, hate-mongering policies, the president stopped bringing up the procession of Central Americans to the U.S. border. He had termed it an “invasion” and claimed—without, not surprisingly, providing evidence—that there were Middle Easterners (by which he obviously means jihadists) in there, that criminals of all sorts were raring to get into the United States to wreak havoc. 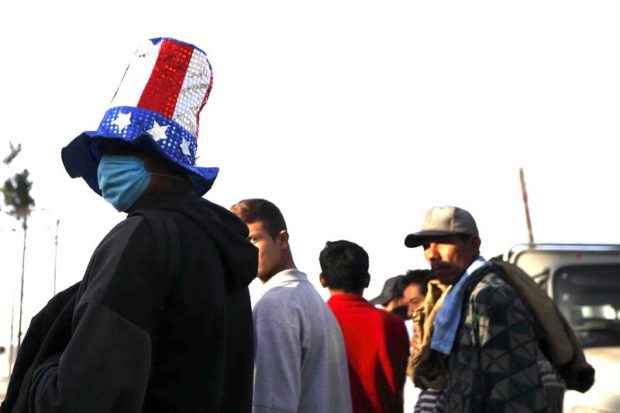 Migrants at the US-Mexico border waiting for the opportunity to enter the United States to seek asylum. AP PHOTO

To dramatize this “threat” he had 5,000 troops deployed at the southern border, so obvious a political ploy except of course for his base, the erstwhile members of the Flat Earth Society. Predictably, they got hot and bothered, that barbarians would crash through the gates, burn down their homes, rape and murder their sons and daughters, and destroy everything that they cherished.

This is where that cliché comes in handy, that those ignorant of history are bound to repeat it. And the fears that Trump’s alarums raised established beyond any doubt that ignorance is alive and well in sectors of the body politic, that for the most part are mostly white, as well as in immigrants and non-immigrants alike, who see themselves as white, skin color notwithstanding.

This preternatural fear of the Other is nothing new, and has always been present, right alongside the feel-good narrative of acceptance and inclusion. The saga of U.S. immigration has always been a variant of the Cain and Abel story, brothers at odds with each other.

Just a few instances demonstrate how xenophobia has a long and dubious tradition in this country.

The Chinese Exclusion Actof 1882, for instance, banned the immigration of laborers from China, following on the heels of the Page Act of 1875,prohibiting Chinese women from coming over. The act was the first law enacted aimed specifically at one ethnic group and reflected the belief that the Chinese constituted a “Yellow Peril.”

Of the Irish one James Silk Buckingham wrote in 1842, “The emigrants who land at New York, whether they remain in that city or come on in the interior, are not merely ignorant and poor—which might be their misfortune rather than their fault—but they are drunken, dirty, indolent, and riotous, so as to be the objects of dislike and fear to all in whose neighbourhood they congregate in large numbers.” The Irish were seen as blacks, fit only to be servants.

As for Filipinos, particularly on the West Coast—for that is where most headed for the better half of the 20thcentury—they were seen as sexual predators, a threat to the purity of the Anglo-American strain, confined to ghettoes. Working on farms, canneries, and orchards, these men (for they were mostly men), the manong, were viciously targeted and at times killed by white vigilante mobs. This racial animosity had its roots in the 1899 Philippine-American War, when U.S. soldiers routinely used the N-word to insult Filipinos. Other choice words: “thieves,” “monkeys without tails,” “savages.”

While New York has the largest Jewish community outside of Tel Aviv, anti-Semitism is still a part of the nationalist American fabric, vide the mass shooting at the Tree of Life Synagogue in Pittsburgh. In 1939 President Franklin Delano Roosevelt would not allow a ship over 900 Jewish refugees from Hitler’s Germany to seek refuge in the U.S. The ship was forced to return to Europe. Great Britain accepted some but not all of the displaced Jews. It’s been estimated that more than 200 of those refugees wound up in Nazi concentration camps, where they perished.

In stark contrast, from 1937 to 1941, the Commonwealth of the Philippines, under President Manuel Quezon, welcomed 1,200 Jews who otherwise would almost surely have perished in the Holocaust. Quezon had his flaws but not when it came to recognizing the moral imperative to act humanely. He had plans to resettle 10,000 Jews—in Mindanao, no less—but World War II brought an end to that.

As the Japanese occupied the Philippines, the U.S imprisoned 100,000 Japanese legal residents and Japanese-Americans on the West Coast in internment camps beginning in 1942, a clear violation of their civil rights, and a graphic reminder of how racism, as someone pointed out, remains the original sin of this country.