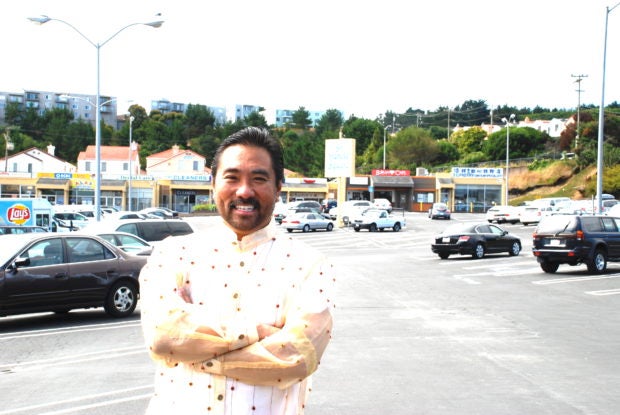 Daly City Council Member Ray Buenaventura has emerged as the new leader of Fil-Am politics in San Mateo County by getting the top vote and guiding his proteges to victory yet again. INQUIRER/Cherie M. Querol Moreno

With final tally to be ratified on Dec. 7 by the County Elections & Assessor-County Clerk-Recorder, lawyer and current Vice Mayor Ray Buenaventura and first-time candidate teacher Rod Daus – Magbual as of Nov. 25 conclusively held first and third of 3 open seats on the City Council of Daly City.  The northernmost town is where San Mateo County begins and where the City and County of San Francisco ends.

Filipinos took more than 80 years since settling down in Daly City with other refugees from San Francisco in the 1906 Great Earthquake to elect one of their own to the governing body. Two years ago, they made up for lost time by electing four Filipinos to the City Council of the most populous municipality in San Mateo County.

This month’s race cemented the Filipino foothold in the city of some 110,000 residents and underscores shifting demographics within the Filipino community itself.  At nearly 40% by unofficial estimates, Filipinos make up the biggest population of color here. 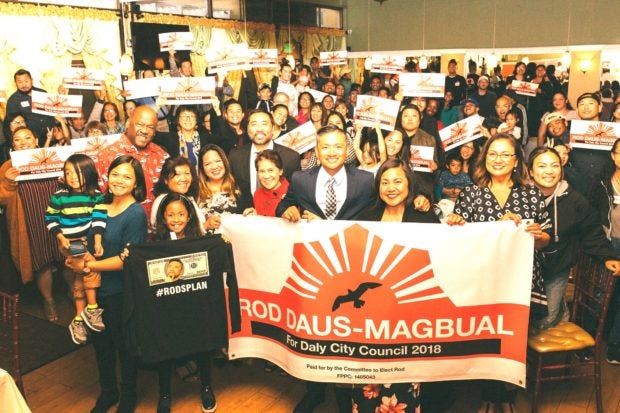 This month’s race cemented the Filipino foothold in the city of some 110,000 residents and underscores shifting demographics within the Filipino community itself. CONTRIBUTED

In his third defense of his City Council seat, Buenaventura topped the winners yet again by collecting 17,320 votes or 32.08% of the total.  Noteworthy, yes, but more impressive to political observers was the current vice mayor’s proven influence, having taken Daus-Magbual under his wing to garner 12,388 votes or 22.95%, pulling away by almost 1,500 votes ahead of the fourth challenger for the win.

Buenaventura did the same in 2016 for first-time candidates Glenn Sylvester, a retired sergeant with the San Francisco Police Dept., and Juslyn Manalo, a Filipino WWII veterans and housing advocate: Both sailed smoothly to victory, swearing in as Mayor and Vice Mayor on the same night they took their oath of office as duly elected Council Members.

Buenaventura was not up for re-election then, but he had joined the candidates at early morning walks on gusty Skyline Boulevard, waving posters of the bets in the most palpable endorsement and a tacit step toward his own re-election campaign down the road.

Buenaventura was the second Fil-Am elected to the City Council of Daly City, 18 years after his fellow attorney Mike Guingona, whose term ends this year.  Elected in 1993, Guingona, a martial artist who was a wrestling champion as a student, did not seek re-election to concentrate on his work with the Philippine Wrestling Federation in Manila.  His impending departure further solidifies his successor’s role as the senior statesman among Fil-Am politicos. 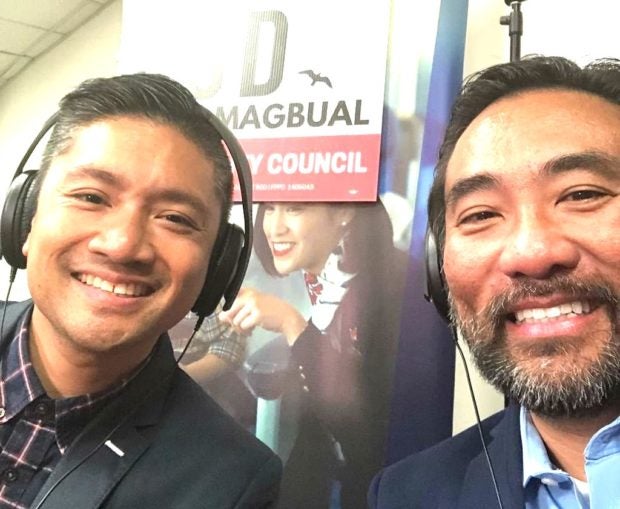 While not shy about his burnished accomplishment, Buenaventura, 54, gave credit to his allies and supporters.

“I am grateful to be a part in building the Fil-Am leadership in Daly City and beyond,” he told INQUIRER.net.  “No one person can do it alone.  It takes a community effort to build a succession plan and continue to recruit people in the pipeline.”

To that end, he spurred the formation of Filipino American Elected and Appointed Officials, an organization aimed at identifying and guiding new leaders for a “powerful and dynamic movement to empower Fil-Ams.”

His words echo those of his teachers, to whom he paid tribute in his shining hour.

“I owe my constant first place finish to hard work, grassroots efforts and surrounding myself with a great campaign team,” he told this writer.  “I learned from mentors, including (Clinton Federal Council on Aging appointee) Alice Bulos, (Daly City Personnel Commissioner) Perla Ibarrientos and (Daly City Planning Commissioner) Ray Satorre.  I benefited from years listening to ‘Tita Alice’ as I accompanied her to various political functions.  She would never hesitate to give me advice on how to be politically successful.  Perla Ibarrientos likewise was always there to guide me through the intricacies of Daly City politics.  Ray Satorre is a master tactician and strategist.”

Satorre, an entrepreneur and political bankroller, hosted a record-breaking fund-raiser for Buenaventura in the summer.

The only time Buenaventura has lost an election was his run for the County Superior Court in 2014, thought by some as a premature endeavor.  Locally, however, his golden touch is beyond reproach.

With victory comes responsibility, hence Buenaventura’s goal to grow potential elected officials who share his heritage.  His eye zooms in on specific qualities.

“I recruited Glenn Sylvester, Juslyn Manalo, and Rod Daus Magbual because I saw in them true leadership capabilities.  The one common denominator I believe they all had was their passion.”

He literally stood by his protégés.

“After recruiting them to run, I further believed I had a responsibility to make sure they won.  That included not only managing their campaign,  but actually doing the door-to-door campaigning with them.  As the candidates would wake up at 5 a.m. to start campaigning, I, too, would join them.  I believe it was incumbent upon me to always be there every step of the way and I would always do that which I asked of them.” 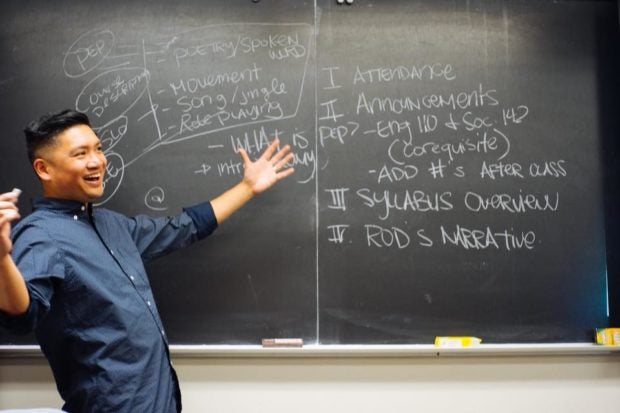 As a consequence, Filipinos will preserve their 80-percent presence on the City Council of Daly City when the new members swear in on December 10.  The lone non-Filipino on the City Council is Member-elect Pamela Di Giovanni, also an avowed Buenaventura ally and a familiar face at Filipino events.

Buenaventura is the lone Philippine-born on the City Council.  Incoming Member Daus-Magbual was born in Canada, Sylvester and Manalo in this country.

“I am ecstatic to see the continuation of four seats filled with Filipino Americans. Most importantly, my colleagues share the same values towards community, housing and public safety,” current Mayor Manalo shared her elation with usainquirer.net. “This is another milestone for Daly City, not only for the Filipino community but the whole community of Daly City. I believe we will see continual positive change ahead.”

Past Mayor Sylvester shared the sentiment:  “Daly city consists of a large population of Filipinos.  As such the council should also reflect the same.”

Some sectors see differently, saying Filipinos are now over-represented, a suggestion Buenaventura says he has heard and which he downplays.

“I believe in diversity of representation, and Filipinos historically have not been represented in government positions in the past,” he reminded.  “The fact that we are catching up is a good thing and we should join together in celebrating the increase in Fil-Am representation.  The success of those Filipino Americans who are already in elected positions is proof that we can govern and be leaders for everyone.”

Some political players expressed concern that the incoming composition will be less than diverse, with all owing the fabled Filipino debt of gratitude to their mentor.  Though openly sharing their opinion in person, none agreed to be identified for publication.

One said she supported the defeated candidate whose background is finance because the city is in urgent need of someone with fiscal savvy.  Another said he was considering a run in the next election to balance the Filipino representation.

Buenaventura rejected the idea that reciprocity or identical views were at the root of his recruitment.

“On the contrary, I’ve tried to reach out to wide variety of diverse people from different backgrounds and interests.  In fact, when I’ve mentored people along the way and have encouraged them to run for election, I don’t ask them where they stand in a particular issue.   I don’t want robots, I want people who will think for themselves and can articulate their own positions,” he said.  “I see my role as a mentor to help develop their own thoughts and ideas into a simple and effective message.  I see potential in people according to what they’ve done in the community and their record of accomplishments.  I truly believe in the value of having diverse opinions.  No one person has the answer to everything.  There truly is strength in numbers and diversity of opinions matter.”

Heart and commitment weigh more than skill sets, he said.

“You don’t have to be a financial genius.  No one profession is better than the other to serve.   We also have a great staff of experts to help us with the financial data and analysis.  It’s up to us to make the hard decisions based on meaningful hard work and deliberations.”

Interestingly, the Council previously was split 3-2 between the Buenaventura and Guingona factions, a cause for concern among advocates for Fil-Am “unity.”

“Just because (there are times when) we all don’t agree, it may seem the Council is divided,” Sylvester pondered past dynamics.  “What matters is to stay relevant and acknowledge changing times, making decisions with this in mind.  Other factors include age and longevity; if everyone can find common ground and can change their way of thinking, this would make a cohesive Council.”

For now, “cohesive” sounds like an accurate description of the incoming City Council of Daly City.