Rodrigo Duterte’s supporters have been eager to give him credit for the historic decision of the United States to return the Balangiga Bells.

“His immeasurable respect and appreciation of our history and unmatched unorthodox skill in communicating our nation’s interest made it possible for the Bells of Balangiga to be returned to the Philippines,” Presidential Communications Secretary Martin Andanar wrote on Instagram.

We should indeed appreciate the ironic historical significance of the next chapter in the Balangiga Bells saga. For with the long-awaited return of the one of most painful reminders of the Philippine American War, the Balangiga Bells have become, once again, a bloodbath trophy, a triumph of sorts for a champion of mass slaughter. 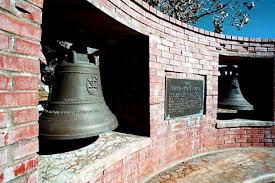 American troops stole the bells in 1901 after a bloody campaign against the people of Balangiga, Samar. Now, the retrieval of the bells is being declared a victory for the Philippine president who inspired mass killings even more horrifying than the American massacre 117 years ago.

The story of the bells began on September 28, 1901 when they were used to signal a surprise attack by Filipino revolutionaries on American soldiers in Samar.

It was a resounding victory for the Filipino resistance to American colonial rule. But it triggered a horrific US retaliation that is still considered one of the worst American war atrocities in history.

At the center of the U.S. response to the Filipino victory was General Jacob H. Smith, who ordered his men to turn Samar into “a howling wilderness.” That earned him the sobriquet “Howling Jake.”

“I want no prisoners. I wish you to kill and burn, the more you kill and burn the better it will please me. I want all persons killed who are capable of bearing arms in actual hostilities against the United States,” General Smith said.

Asked about the age limit for the order, Howling Jake said 10 years or older.

The exact death toll of the Samar operation is unknown. Estimates have ranged from 2,000 to 50,000. American forces took the bells back as a trophy of the bloody campaign.

Past Philippine presidents tried unsuccessfully to convince the U.S. to return the bells. Last year, Duterte famously declared in a state of the nation address: “Give us back those Balangiga bells. They are ours. They belong to the Philippines. They are part of our national heritage. … Isauli naman ninyo. Masakit ‘yan sa amin.” (Please return it. That is painful for us.)”

But here’s the curious twist in the history of the Balangiga Bells: it was the Philippine president who could be described as a modern-day Howling Jake, who inspired a violent and ruthless campaign that has led to the deaths of thousands of poor Filipinos, who actually managed to get them back.

“A few tried but it is only him who succeeded,” Andanar also said in praising Duterte.

Indeed, a few tried, but only Howling Digong managed to reclaim the trophy of a bloodbath.