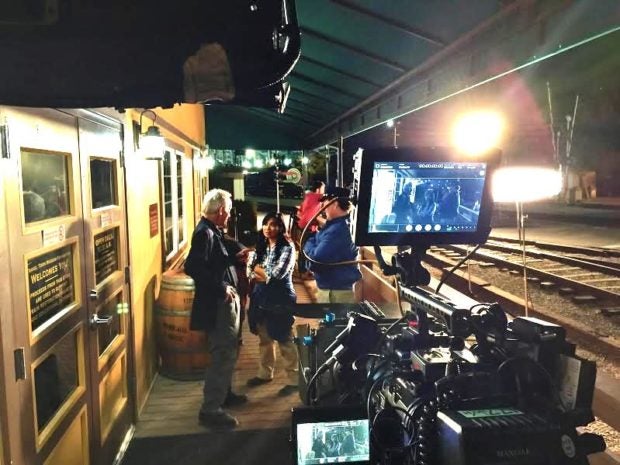 Artists and diversity advocates Dale Fabrigar and Gio Espiritu set for the red carpet in the country’s largest film festival dedicated to horror and sci-fi. CONTRIBUTED

SAN FRANCISCO — Manila-born actor Giovannie “Gio” Espiritu defies the definition of undocumented immigrants according to the current tenant of the White House.

One of the busiest Filipino Americans in Hollywood, Espiritu stars on Amazon Prime’s popular series “Dyke Central” and teaches acting at her HollywoodActorsWorkshop.com, sharing skills with future colleagues and access to the system that has been an obstacle course for aspiring thespians of color.

On Dec. 1, Espiritu will flash her killer smile on the red carpet at the New York City Horror Film Festival, when her latest film, “D-Railed,” screens at Cinepolis Chelsea on West 23rd Street.  She is thrilled to have been directed by fellow Fil-Am, Dale Fabricar, famed for the cult hit “Area 407.” Gio Espiritu willingly explains why she always carries her passport with her. CONTRIBUTED

Forget about the infamous “crab mentality” often attributed to Filipinos by Filipinos who have heard too many sad stories about community infighting: Espiritu and Fabrigar found each at a Filipino networking group in Los Angeles, where Espiritu relocated a couple of years ago from the San Francisco Bay Area. Both industry veterans, Fabrigar, gave his new acquaintance a hot lead.

The semi-finalist filmmaker for “On the Lot” produced by Steven Spielberg and Mark Burnett told Espiritu, whose resume includes a recurring role as a med student on the blockbuster NBC series “ER,” about his latest project. He invited her to auditions, or what Espiritu calls a “grueling” process that includes an “improvised audition, callback, group chemistry test, and a screen test for producers” to earn the role of Jackie, a train station worker whose boss is Manny, played by sci-fi icon Lance Henriksen.

“Working with Dale was great,” Espiritu tells this writer. “It’s surprising because he has such a humble, gentle demeanor, but he is such a great horror director. As with any independently financed film production, there were snafus during film production, and he never lost his temper or his cool on set. That always makes it the best environment for actors and crew to do their best work.”

“D-Railed” depicts a murder mystery train that plunges into a lake where a predator attacks surviving passengers.  It has been branded a “movie with brains, blood, and rich characters that makes you question everything you’re watching,” Espiritu quoted from critics, who noted that viewers “jumped, screamed, laughed and at the end applauded” at the end of sneak peeks.

Art was only one reason the two Fil-Ams clicked and collaborated on a film for the nation’s largest film fest focusing exclusively on horror and science fiction. Both are passionate community activists.

“Dale, who is an advocate of diverse and inclusive representation in the media for Filipinos, has sprinkled other Filipino actors throughout the film, including Phil Young, who plays The Creature, and Marvin Ryan, a dancer-turned-actor who plays Martin at the beginning of the film,” says Espiritu. Espiritu is a single mother whose story of survival from a violent marriage in a 2004 event broke the silence over the issue of intimate-partner violence in the Filipino American community.  For three years, she directed and performed in the Filipina Women’s Network’s production of “The Vagina Monologues” to benefit domestic violence shelters and service agencies.  She continues to speak at related events to empower survivors by informing them of the dynamics of abuse, resources and support groups.

You could say acting, the profession, saved Espiritu’s life.

Isolated from friends and family by her older, controlling husband, she discovered voice- overs as refuge.  She found a safe haven within herself, inhabiting personas in situations far healthier than her own.  The avocation became her occupation when she found the strength to leave her abusive relationship.

“I kind of fell into acting as a survival thing and just went all out into it,” she looks back now. “I don’t know if there was plan B. I guess teaching is a complementary skill that I have and my students are super successful. Two of them are also Filipinas as well (the Espina Sisters) and have their own show on the Dreamworks/Universal network called, ‘Life Hacks for Kids on The Road.”‘

Hollywood is notoriously monochromatic in terms of on-screen job opportunities, but the success of films like “Black Panther” and “Crazy Rich Asians” is forcing power players to add color in casting.

“I realize that it all needs to start with the writers and the breakdowns or character descriptions that go out to agents.  If the breakdowns don’t specifically say ‘Open to all ethnicities’ the default is usually white. That’s why it’s important to have more writers/creators that are people of color,” she discussed the opening up of roles for actors like herself. “As a woman of color, we kind of are at the bottom of the food chain. There are more roles for men, but yet more women in the industry. And most of the roles that are out there for people of color are supporting roles or one-line roles. I am so thankful for ‘Crazy Rich Asians’ and ‘To All the Boys I’ve Loved Before.’ I hope that it will ripple down to the working-class actors that are still hoping for more visibility. That’s why I really stress for my students that they have to love the art of acting before they get into the business side of things because some days it feels like Sysiphean feat.”

Her desire to elevate her peers is quite the departure from the deviant behavior immigration foes attach to newcomers without legal documentation.

Espiritu counts herself among the many who arrived on these shores as tourists and stayed well past the date stamped on their passports to seek a brighter future.

“I know I had refugee status for a while, but I was little when it all happened, so I don’t know the details, but thank goodness I’m a citizen now. I still carry my passport card with me though because the threat of INS (sic) checkpoints freaks me out.”

That and her Screen Actors Guild card, evidence of her rightful place in Hollywood.