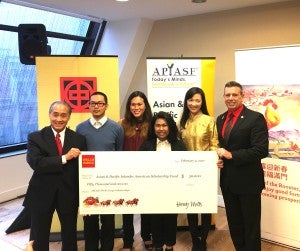 As part of the festivities to kick off San Francisco’s Chinese New Year celebration, Wells Fargo Bank presented its $50,000 grant at ceremonies held at the Chinese Cultural Center at the Hilton Hotel Chinatown facility. It has been 165 years ago this coming March 18 since Wells Fargo opened its doors to the San Francisco community. The bank’s legacy of serving the community lives on as it continues to invest in Asian and Pacific Islander American youth and their education.

Since 2006, APIASF and Wells Fargo have worked together to support educational access and success for AAPI students and their families through scholarships, financial education, mentorship, college tours and national events that support student success.

To date, Wells Fargo has generously donated over $6.8 million and funded over 1,300 scholarships. In this past year, 70 percent of APIASF/Wells Fargo Scholars lived at or below the poverty line and 73 percent were the first generation in their families to attend college.

Greg Morgan, EVP and president of the Greater San Francisco region of Wells Fargo, presented the check to Neil Horikoshi, president and executive director of APIASF, together with three of this year’s scholars, Guohua Xie, Lani Yoshimoto and Nikkola Napolitana.

Horikoshi knew of what he spoke as he praised the scholars and the journey they have been through since he, too, walked the same path as an underprivileged aspiring scholar years ago. “In our decade-long relationship, Wells Fargo has been a committed supporter of APIASF, our wcholars, families, and the greater AAPI community,” he said. “We are honored to have Wells Fargo’s continued support to help increase opportunities for underserved students nationwide.”

Lani Yoshimoto is a sophomore at Mission College majoring in psychology. Prior to continuing her studies, she served in the United States Marine Corps from 2005 to late 2009 with two overseas tours that included Fallujia, Iraq. She espouses LGBTQ causes and currently represents the group in 114 community colleges in California.

Since being discharged from the military she has appeared in a documentary sponsored by the Veterans Affairs Healthcare system in conjunction with Stanford University. The documentary titled “The Camouflage Closet” had been shown at various schools and VA Hospitals nationwide to help enlighten healthcare providers about care and concerns of LGBTQ veterans. She intends to continue her advocacy after graduate studies and open a clinic for LGBTQ patients and others from low-income families. She wishes to be a contributing factor in their journey.

Guohua Xie studies at City College of San Francisco majoring in computer and information systems. As a new immigrant, he saw how hard his parents worked to put food on the table. Their sacrifices inspired him to study and work hard to augment the family resources. He is now a sushi chef although, he started as a dishwasher because of his limited English skills when first he arrived. In school, he tutored students with programming assignments, and interned as a mobile performance staff at Salesforce. He and his parents strongly believe in education as a path that can help elevate their lives in the future.

Nikkola Napolitano is a freshman at San Jose State University. She is Chinese-Filipino born and raised in San Francisco. Her mother, Linda Ng, is pure Chinese awhile her immigrant father, Donald, is from Mindoro. Growing up as an only child of a single mom, and from a low -income multi-ethnic family, Nikkola said it was a challenge. But as she grew up, she realized the potential change and impact that she is capable of as an individual.

She decided to join Filipino youth leadership groups like Kabataan, which worked on projects within the community to fight for people’s rights and bring awareness of social issues such as women’s rights, LGBTQ affordable housing issues, etc. She also joined Juma Ventures, a non-profit that helps low-income students of color save money for college. She was successful in this involvement, which improved her leadership and communications skills and inspired her to be a role model and representative for marginalized groups. She realized how important juvenile leadership is and wants to help guide future generations of leaders. She aspires to be a social worker.