John Lennon and the Mystery of the Incarnation

John Lennon of the famous Beatles Band said in 1965:

“Christianity will go. It will vanish and shrink… We’re more popular than Jesus now; I don’t know which will go first – rock and roll or Christianity” (London-based Evening Standard, March 1966).

But he’s gone.  Elvis Presley, Gene Vincent, and Jerry Lee Lewis are gone. When rock and roll is no longer a fad, Christianity, the world’s largest religious group, is kicking and alive. 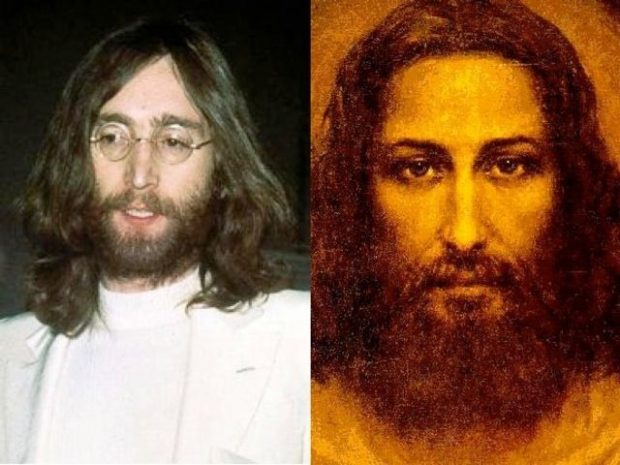 During a trip to Canada in 1969, Lennon repeated his belief that the Beatles were more influential on the youth than Jesus Christ. What a dehumanizing claim!

Dehumanized is an awful situation when the famous personality is deprived of good human qualities such as humility and fear of God. That happens when fame consumes a man and power of whatever shape and form can bring out the swagger in a person.

Like power, fame corrupts and leads the soul to narcissism, godlessness, and thoughtlessness that borders absurdity.

In the midst of today’s religious confusion and so much unbelief, it might be well to go back to the origin of Christianity (which Lennon so predicted to “vanish and shrink”) and its central mystery.

The central mystery is the Incarnation of the only Son of God. Here, I underscore the root carne (from Latin caro, carnis) in the word INCARNATION, which means “flesh, human flesh.”

We are used to celebrating the birth of the historical JESUS (the First Christmas) as the greatest story ever told, but the Incarnation goes back nine months before the First Christmas. The occasion is called the Annunciation, when “the Angel of the Lord declared unto Mary (a teenager then), and she was conceived by the Holy Spirit.”

Being prayed at 12 noon in each and every one of the 70 SM malls across the Philippines, The Angelus reminds us of the fact that God’s eternal Word (Verbum Dei), Creator and Redeemer, through whom all things were made, was Himself made “flesh,” becoming a true son of Eve and a legit member of the Homo Sapiens.

That Jesus was born a JEW (today’s Israelite), with a particular culture, His mother belonging to the line of Old Testament’s King David, “Son of David,” which means the child Jesus had a royal blood.

“I am Jesus Christ”

In 1969, Lennon was asked to play the part of Jesus in the stage musical “Jesus Christ Superstar,” an offer that he declined out-and-out, saying he would have been interested if Yoko Ono played the role of Mary Magdalene.

Lennon, being a reader of religious books (according to his biographers), must have encountered somewhere the Incarnation story, the event of the historical conception and birth of the historical Jesus some 2,000 years ago when Caesar Augustus was Roman Emperor, Herod was ruler of Judaea, and Quirinius was governor of Syria.

A year earlier, in 1968, Lennon in a meeting at Apple Corp. with the other Beatles proclaimed something thoughtless that borders absurdity, that is, he was the living reincarnation of Jesus.

“I have something very important to tell you all. I am Jesus Christ,” he announced, “I’m back again.”

Poor famous guy! He must have confused the Incarnation with the Hindu doctrine of reincarnation. Even Catholics today make the same mistake. What Lennon really failed to reckon is how our dear Lord, after nine months in the holy womb of Mary, was born poor, an infant in a manger (Luke 2:7-8).

Christmas is in the air. This annual celebration recalls that, although He is the omnipotent God who can scan the heights of the heavens and the width of the universe, He was just like any other new-born baby that giggled, blubbered and cried just like any ordinary child.

And yes, He was the Messiah prophesied in the Old Testament, the King of the kings and the Lord of lords (Isaiah 7:14, Matthew 1:23), but, then again, He, just like you and me, sucked on His mother’s breasts for milk.

While himself claiming fame and glory, Lennon failed to know that our dear Lord “did not consider equality with God something to be used to His own advantage; rather (by His Incarnation) He emptied Himself” in what theologians called kenosis (Philippians 2:11-6).

Jose Mario Bautista Maximiano ([email protected]) is the author of the book The Beginning and the End (Claretian, 2016).