Hawaii library exhibits on Fil-Am veterans of WWI and WWII

Hawaii library exhibits on Fil-Am veterans of WWI and WWII 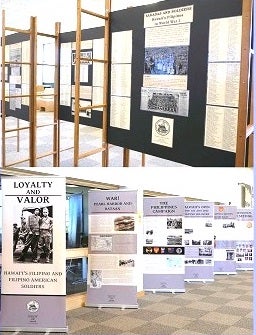 HONOLULU — The Filipino-American Historical Society of Hawaii will have two Filipino American Veterans exhibits on display in the lobby of the Hawaii State Library from Nov. 17 to Dec. 1.

The WWI exhibit describes the experiences of Filipino plantation workers who volunteered to defend Hawaii during WWI as part of the Hawaiian National Guard.  Over 4,000 Filipinos were recruited in the lead up to and during the war.

In both exhibits, the promises made and not kept by the United States and Hawaii Territorial governments are described.

All programs are subject to change. If you require an auxiliary aid or accommodation due to a disability, please contact the library at least 7 days before the program date.