Santo Rodrigo is right, our saints are ‘foolish’ 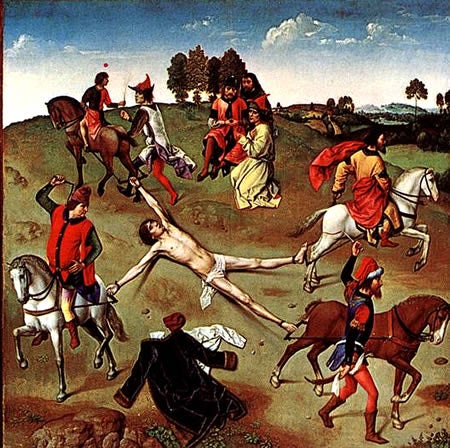 “Get hold of a picture of mine, ‘yan ang ilagay niyo sa altar, Santo Rodrigo,” he said as he offered himself as an alternative to Catholic saints, whom he called “fools and drunkards.”

“There’s nothing new about our saints being called ‘fools and drunkards.’ Saint John the Baptist was even called ‘devil-possessed’,” Caloocan Bishop Pablo David retorted.

“A time is coming when people will go mad, and when they see someone who is not mad, they will attack him saying, ‘You are mad, because you are not like us,’” wrote Saint Anthony the Great (251-356 AD).

Yes, a saint is the opposite of the ordinary, average, and middle-of-the-road type of guy. He/she does his/her ordinary work extraordinarily well, and the regular guys would always regard as unconventional, even foolish, the saint among them.

Yes, Santo Rodrigo is correct. Saints have been called fools, Fools-for-Christ, Yurodivyi in Russian. The Russian Orthodox Church is proud to officially name Saint Isidore as “Christ’s Fool of Tabenna” in Egypt and Saint Xenia of St. Petersburg as the 18th century “Russian Fool-for-Christ.” In grief over the death of her husband, the latter distributed all her possessions, left nothing for herself, and took up a life centered on God and not on self. True madness indeed!

It’s also stupidity to tell your torturers, as in the case of San Lorenzo Ruiz: “I am a Catholic and wholeheartedly do accept death for God. Had I a thousand lives, all these to Him I shall offer”?

In the 1600s, in the midst of the Catholic persecution in Nagasaki, Japan, the few ones who recanted were allowed to live. Subjected to various types of bodily-emotional tortures, the Filipino protomartyr was given a chance to recant his Catholic faith. But he didn’t take the chance. Santo Rodrigo is correct, San Lorenzo Ruiz was such a fool!

Was it Saint Paul himself once admitted: “We are fools for Christ’s sake…” (1 Corinthians 4:10)?

Dear Reader, I know it’s neither trendy nor popular but, just the same, allow me to go up to the next level, and offer a theology of (or a discussion about God’s) foolishness and stupidity.

YHWH God’s madness in His method

Before that bloody event in Calvary, we could have doubted whether YHWH God cared at all. Now, how could anyone ever doubt His merciful love after having seen Him dead that Good Friday, hanging on a cross naked?

But that horrible event tells us something more profound.

That horrible event, that bloody crucifixion in Calvary, has become the most powerful reminder of our broken promises and God’s unbroken promise, of our badness and God’s Goodness, of our idiocy to hate God and God’s idiocy to love us back.

There is madness in His method when God writes straight using crooked lines, but “the foolishness of God is wiser than human wisdom,” as Saint Paul put it nicely (I Corinthians 1:25).

To medicate our wounds caused by sin, the Son of God chose to die a shameful death. Isn’t this foolish? Isn’t it inappropriate, insane, or even scandalizing that sin, which God so abhors, should be the occasion for God to assume a human nature? Sin (evil) is the polar opposite of the Good!

Yes, Santo Rodrigo is correct. Oh, divine madness, oh Divine Goodness and, rewording William Shakespeare, “God’s only love sprung from His only hate,” and God did what is stupid.

A drop of blood, a single tear, or one word, just one word, would suffice to procure the salvation of the whole humankind, but YHWH God did more than that. He was tortured with 39 lashes. He was crowned with thorns. He was made to carry the heavy cross. He expired.

Pope Clement VI wrote: Though innocent, our Blessed Lord was executed in the most ignominious manner, shedding not merely “a drop of blood… but a copious flood” (Jubilee Bull Unigenitus Dei Filius, 1343 AD).

YHWH God so loved us (John 3:16). And because of such love, yes, Santo Rodrigo is correct to call God “stupid.”

Jose Mario Bautista Maximiano ([email protected]) is the author of The Church Can Handle the Truth (Claretian, 2017) and The Signs of the Times and the Social Doctrine of the Church (Salesiana, 1992).