Pimentel (in NY) to PH police: ‘You can’t forever leave these killings unexplained’

Pimentel (in NY) to PH police: ‘You can’t forever leave these killings unexplained’ 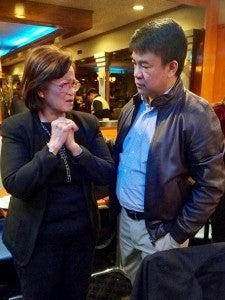 NEW YORK—Philippine Senate President Aquilino “Koko” Pimentel III, the third highest-ranking official of the Philippine government was in town Feb. 13 to attend a United Nations conference on the Law of the Sea.

INQ: Being a former chair of the justice and human rights committee at the Philippine Senate, can you give us an assessment of President Duterte’s drug war?

“The campaign against drugs is fully supported by me, by the party PDP-Laban, and even by the Senate majority. We have a written compact and we are supporting the President’s all-out war against crime, drugs and corruption.

“But of course it must be in accordance with law. So we are also worried about these extrajudicial killings, which we see happening left and right. We need more information about these.

“We are pressuring the PNP [Philippine National Police] to start solving some of these unexplained killings. They cannot forever leave these killings unexplained. Otherwise, we will be convinced that this is the most incompetent Philippine National Police. They cannot even solve one extrajudicial killing. So we have to keep on following up with the PNP and pressure them.”

INQ: So you’re in favor of the way the President is handling this crusade against drugs?

INQ: Is the Senate taking any initiative as far as improving the relationship between the President and Vice President Leni Robredo?

“We attended the LEDAC [Legislative-Executive Development Advisory Council meeting] and the Vice President was there. Nakita naman namin [We could see] she had a cordial relationship with the President. I think it’s back to normal. But it is the President’s prerogative to choose his cabinet members. Kung ayaw na niya kay [If he no longer wants the] Vice President [there], the Vice President should accept it.” INQ: Please comment on the President’s statement that he would not lift a finger in helping undocumented Filipinos in the United States.

“We should harmonize his message. When the U.S. authorities enforce U.S. laws against a violator and he happens to be Filipino, the Philippines will not interfere—just as we do not want the U.S. to interfere when we enforce our laws. But when the Filipino, although he’s a violator, needs the help of the government, the government can help him. Not for him to continue staying here in the U.S. illegally, but to bring him home. That is the obligation of the government.”

INQ: As far as the President’s language, every time he delivers a public speech, does he get any advice or pointers from any of his Cabinet members or allies?

“I’m sure in the content, he’s influenced by his discussion during Cabinet meetings, But the manner, the style—that is uniquely his own. ‘Yung mga [The] cursing, that is tatak [brand] Duterte, his trademark. That is his own.”

INQ: What is President Duterte’s message to Filipino Americans?

“I will just repeat what he [Duterte] said that just as in the Philippines, we are fixing the country by enforcing the law. Sabi yata niya rito sa [I think he told] Filipino Americans, try your best also to follow American law to minimize friction, to minimize problems and troubles. But of course when a Filipino is in trouble, he can run to his government for help.”