Immigrants are human beings who just want a better life

Immigrants are human beings who just want a better life Immigration laws are relatively new. These man-made laws were instituted long after countries and national boundaries were already in existence. When there were no immigration laws people moved freely from one place to another. Famines, wars, natural disasters, plagues, poverty, personal problems, economic reasons, political oppression, etc. are the usual reasons for migration.

Today, even with immigration laws, people still move and leave their home countries for the same reasons. They bravely risk their lives and safety, are often exploited, tolerate extreme weather conditions, face strange cultures, discrimination and local hostilities. They cope with loneliness and alienation. They go through all kinds of difficulties, sustained only by the hope that somehow they might find a better life. 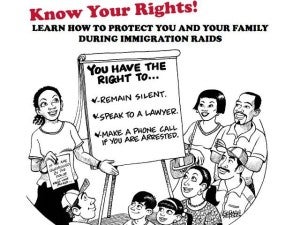 Immigrants and their children from the four corners of the globe created this country. Ideas from their native lands, technical knowledge, trade secrets, new arts and philosophies, varieties of cultural ingenuity, music, and all kinds of food are now integrated into American society and culture. All these together with their skills, talents and work ethic resulted in the creation and emergence of a uniquely great and powerful nation of immigrants.

The United States is a great nation not only because of its awesome political and economic power, but also for her continuous aspirations to live up to the highest ideals of the human race: individual freedoms; the right to happiness, free speech, free thought; equal protection for all in the application of the laws; religious freedom; due process; racial equality, etc. Even if these aspirations are not yet complete realities, they are national, global and spiritual goals worth pursuing.

The United States is a country where good and evil are constantly in conflict, but where good often prevails in the long run. There are so many genuinely good human beings here and also horribly evil ones. Even the government policies of this country throughout its history reflect this constant, unending conflict between good and evil. Like a pendulum, the country’s policies continuously swing back and forth from the evil side to the good side and back again.

The demonic genocide of American Indians, slavery, the extermination of entire barrios in the Philippines, segregation laws against blacks and Asians, the internment of Japanese Americans in WWII, the dropping of atomic bombs against the Japanese civilian population, racially discriminatory immigration laws, the mass murder and napalm bombing of innocent Vietnamese villagers, the use of torture against military and political prisoners, etc. — these were the results of the pendulum swinging to the dark side.

But the swings of the pendulum to the good side rectified these moral distortions: Slavery was eliminated; Indians were compensated with billions of dollars for damages and their lands; higher education and national health care were established in the Philippines; segregation laws were abolished; a national apology and monetary compensation were provided to Japanese American internees; U.S. aid to Japan led to economic resurgence after WW II; racial and national origins discrimination was removed from US immigration laws; a friendlier relationship was established with the Vietnamese government; torture was discarded as a state policy, etc.

Immoral state policies which cause so much suffering hurt all of us in one way or another. Conversely, policies which help human beings find better lives create a better, kinder world.

With the new US administration’s harsh immigration policies thousands in immigrant communities throughout America now live in fear. The new government policy includes the hiring of around 10,000 new personnel who will hunt down out of status individuals and families and seek their speedy removal. Raids by ICE (Immigration and Customs Enforcement) throughout the US are currently being conducted.

Immigration and human rights lawyers will continue to contest the constitutionality and propriety of new policies and procedures which cause so much human suffering.

Generally, there are three groups of immigrants who come here. Group one is composed of those who are more fortunate than the others and have an easier time migrating here. These are those who have US citizen or Lawful Permanent Resident relatives who can easily file immigrant visa petitions for them; those with enough money who come as investors; those with good educations in professions which are much needed. Highly qualified professionals can do self-petitions for immigrant visas or employers can file petitions for them.

The second group is composed of refugees — men, women and children who were displaced and became homeless because of war, natural calamities and other disastrous situations. They undergo about two years of careful screening and vetting before being able to enter the U.S.

The third group is composed of out of status immigrants — also referred to as undocumented immigrants — and all just hoping for a better life. These are the overstaying: visitors (tourists or businessmen); students; workers on temporary working visas; crewmen; those who crossed the Canadian or Mexican border. Those from Mexico have a much harder time coming to the United States, often paying “coyotes” (human smugglers) to bring them here. Canadians can easily come as visitors.

Sooner or later, those who are here illegally usually find some kind of immigration relief depending on the facts of their situation. To mention a few: Marriage to a US citizen; political or some other kind of asylum; presence in the United States for more than 10 years and having a US citizen child or parent who will suffer extreme hardship if the alien is removed (deported); immigration legislation for an individual filed by a Congressman or Senator; utilization of special laws for those who arrived in the US before the age of 16 or some other fitting law that provides for legalization; etc. An experienced, imaginative and creative expert immigration lawyer can often find ways to legalize those without legal immigration status, or find ways to prevent removal (deportation).

My priority advice to those without legal status: Be aware that the protection of the US Constitutional Due Process Rights clause applies to you. You cannot be removed from the United States without a hearing before an immigration judge. If you get arrested by ICE agents, make sure you assert this right. If you sign a form paper where you are waiving this right, you can immediately be summarily deported. Be aware of what you are signing. 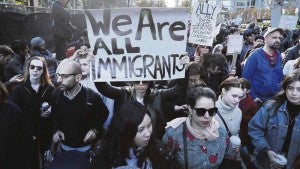 Also try to seek ready access to a competent and honest immigration lawyer who is sensitive and sympathetic. Someone who is out there to really help you and does not worship Mamon. How can you tell? Ask his (or her) clients about their experiences with him. Immigration lawyers, especially these days, are very busy. Access to a good honest lawyer when you need him is very important.

A situation I particular find so personally galling and disturbing are some Filipinos and others in the first immigrant group who acquired their immigrant visas relatively easily and expect everybody else to come to the United States like them. They express so much antipathy for those who are here illegally. They support harsh immigration laws and policies and even wish out of status fellow Filipinos and undocumented others to be deported. They demonize undocumented immigrants falsely, accusing them of taking jobs from US citizens or receiving welfare funds (which is not true as the undocumented are not qualified for these funds). They show no compassion for their fellow human beings.

Filipinos who are in unlawful status often work hard at different jobs and are able to provide food, shelter, health care and education to their families back in the Philippines with their regular remittances. They also contribute so much to the Philippine economy. They deserve much respect, admiration and support.

I wish that the Philippine government were more committed to helping them. How?

Many embassy and consulate personnel are well meaning, but they cannot provide the needed competent expert legal advice on immigration matters. Being in the private sector and not wishing to dictate consular policies, but understanding the immigration problems of many Filipinos in good faith, I can only respectfully suggest to embassy and consular officials to consult with competent immigration lawyers so that they know the applicable laws and procedures involved. 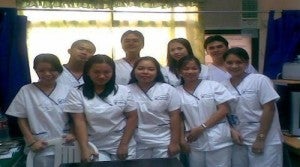 With this knowledge, they can better help the many who need immigration assistance. These are dangerous critical anxiety filled times for so many undocumented Pinoys. They really need help. My law office is open to provide important highly technical immigration law information to appropriate embassy and consular officials, free of any charge. If this can help to spread important legal and procedural information that will benefit many undocumented Filipinos, I’ll feel good about it. It has to do with living a meaningful life.

We do not choose the circumstances of our birth or the situations that force us to risk going to another country for our safety and survival. We sometimes need to violate man-made laws like immigration laws — as long as we don’t hurt others – – in order to follow higher God made laws which call for our survival or the survival of our loved ones.

I understand the need for immigration laws. But those which I fully support are humane reasonable immigration laws and policies which recognize the pressures that cause human beings to look for a better life outside their homelands and take into consideration humanitarian issues as we are all part of the human family. Out of status immigrants should not be treated like common criminals or like animals. Our compassion for other human beings differentiates us from beasts.

The heated immigration debate that currently divides the United States is a real conflict between those who genuinely care for their fellowmen no matter what race or nationality or religion they may have and those who only care about their own selves who are engaged in the politics of hate because of their blind selfishness and irrational fears. It’s a real conflict between good and evil, between love and hate, between heaven and hell.

So many great Americans were immigrants or children of immigrants. America’s greatness as a nation is a direct result of non-discriminatory and humane immigration laws which enabled so many brilliant and good people to come here who created a great nation and a better world.

So many Americans and other people around the globe realize this, and that is why millions of Americans and global citizens are demonstrating and protesting against the new administration’s extremely harsh new immigration policies.

Atty. Ted Laguatan is a San Francisco Bay Area based human rights lawyer and the only Fil-Am among an elite group of only 29 lawyers who have been officially certified continuously for more than 27 years now by the California State Bar as Expert-Specialists in Immigration Law. Tel 650 634 8668 Email [email protected]