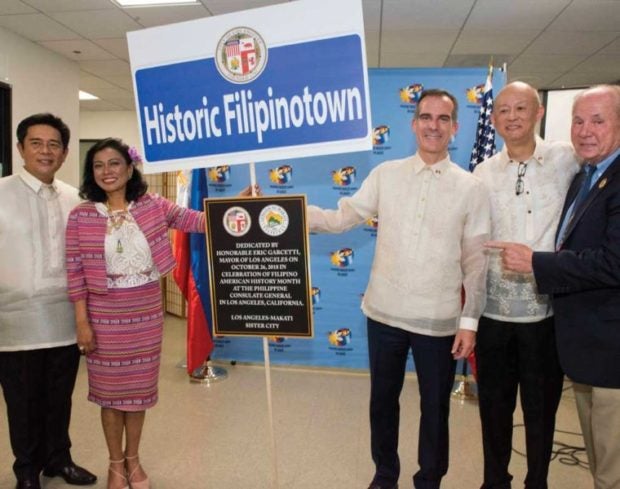 LOS ANGELES — Home to the largest concentration of Filipinos outside of the Philippines, the greater LA area hosted several Filipino American History Month celebrations, from a festival highlighting Filipino food to a panel of Fil-Am personalities inside City Hall.

“To be the first mayor in the Consulate, this is a moment of history and I’m so honored to be a part of writing this history,” Garcetti said.

Over 600,000 Filipinos are said to be living in the greater LA area, as of the last Census.

“I look at Los Angeles not just as a diverse city…I often say, this is a very Filipino city. To know Los Angeles, you have to know Filipino culture,” Garcetti remarked.

LA-Makati Sister City President Abraham Lim said that the organization hosted the event to “represent the Filipino American community in recognizing and thanking [Garcetti] for his efforts in the founding of Historic Filipinotown.”

When he was still a city councilmember in 2002, Garcetti pushed for the creation of Historic Filipinotown. In his remarks, he shared what it took for the neighborhood to become the first official geographic designation honoring Filipinos in the U.S. — that meant unifying the local Fil-Am community.

“[Historic Filipinotown] is still there and will be there for centuries to come because of Mayor Garcetti,” state Assemblymember Rob Bonta (D-Alameda) said. “It is important…to not be erased from history, to give our voice. We will always remember where our families took root and built a new beginning.” 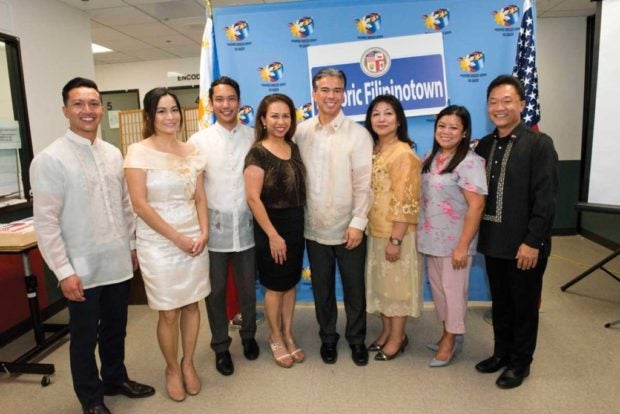 Noting that Makati has been LA’s sister city since 1992, Garcetti said he hopes to visit the Philippine city one day.

“It’s time for us to see if a mayor from Los Angeles might actually come out and visit Makati City. It is on my shortlist,” the mayor added.

Garcetti also thanked Fil-Ams who work in City Hall, as well as the community’s contributions to the city.

“I was joking that the two most important things of any elected official’s life [are] time and money, and so my director of scheduling is a Filipina American as is the deputy mayor who oversees the entire budget for the city of Los Angeles. I think both may be the first Filipino Americans to hold those positions. I feel so lucky to work alongside them. We want to make sure the Filipino American perspective is everywhere,” Garcetti said.

But beyond the connection to the Fil-Am community as an elected official, Garcetti shared his personal ties to the Philippines.

His grandfather Salvador Garcetti — “a dreamer before they had that term” — fought in in the Philippines during World War II and received a pathway to American citizenship.

After the program, the mayor greeted attendees and was given special mementos, including framed Philippine woven fabrics and Filipino pastries.