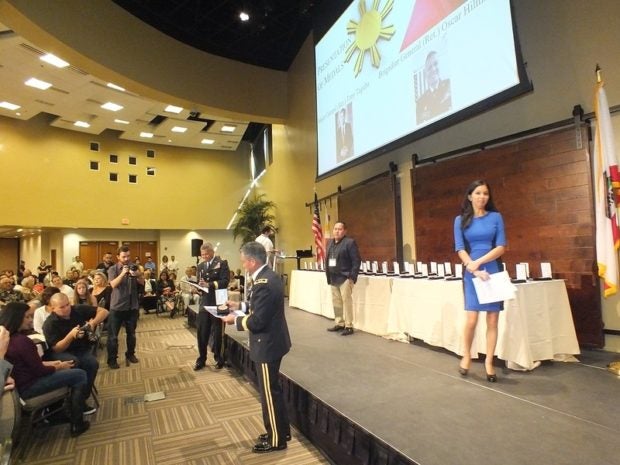 SAN DIEGO, California – More than 500 family members, community leaders and well-wishers filled the Jacobs Community Hall, Sunday, Oct. 14, as the Congressional Gold Medal were awarded to 61 local Filipino veterans of WWII (or their next of kin) from all branches of the U.S. military.

Ten still surviving veterans were present in wheelchairs and with  walkers and one was able to still stand and salute as their names were read off by Retired Maj. General Antonio Taguba and Retired Brigadier General Oscar Hillman who distributed the medals.

Following a prayer by Command Chaplain Don Biadog, Jr., presentation of colors, by MCAS Miramar and luncheon, the veterans were given bronze replicas of the Congressional Gold Medal (CGM) for their service and sacrifice during World War II. A CGM is the highest civilian honor that Congress can bestow. 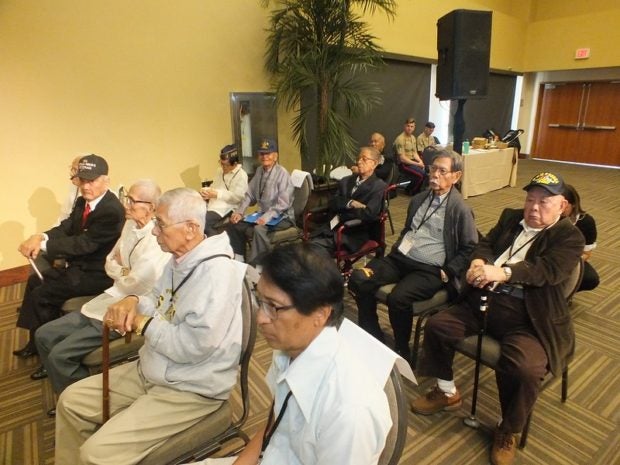 Ten surviving Filipino American WWII veterans who were among the 61 Congressional Gold Medal recipients from San Diego were at the award ceremony. INQUIRER/Florante Ibanez

The Original Gold Medal has been placed in the Smithsonian Institute in Washington, DC.

San Diego Channel 10 News reporter Melissa Mecija emceed the event. Also representing the House of Representatives were Congresswoman Susan Davis and Congressmen Scott Peters and Juan Vargas. A short film was shown to tell the story of how their recognition was secured over the years by a campaign principally led by Retired Maj. Gen. Taguba and the Filipino Veterans Recognition and Education Project established in 2014.

More than 260,000 Filipino and Filipino American soldiers served the United States during the war, but their service was unrecognized for decades. In 1946 President Harry Truman signed the Rescission Act that retroactively annulled benefits that would have been payable to Filipino troops on account of their military service. 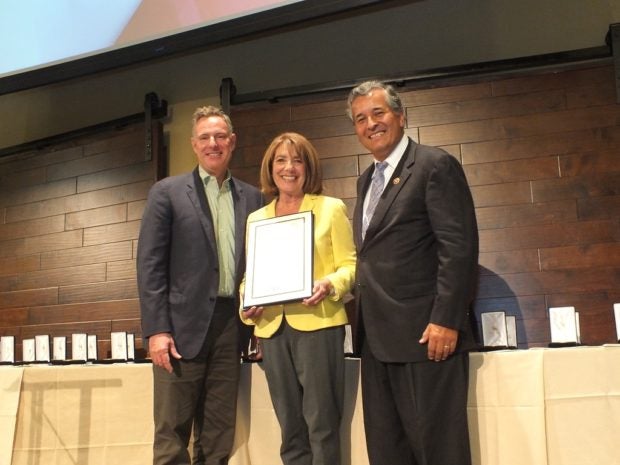 For years, there were many efforts to fight for equity. Many can still recall the day many elderly Fil-Am Veterans chained themselves to the White House fence in protest almost a decade ago. In 1990 Congress awarded citizenship to thousands of Filipino Veterans and extended Veterans Administration benefits to them.

Recognition finally came when the Filipino Veterans of World War II Congressional Gold Medal Act of 2015 was passed and then signed into law by President Obama in 2016.

This Oct. 14, 2018 ceremony was 46th of events to honor the veterans that have taken place around the country. The Filipino American National Historical Society (FANHS) San Diego Chapter headed by their national President Judy Patacsil and Herb Delute hosted the local event with the support of the Council of Philippine American Organizations (COPAO) and House of the Philippines. Major sponsors included The Filipino School, founder Tony Olaes and AARP.