On Coming Out Day, unpacking the guilt, shame 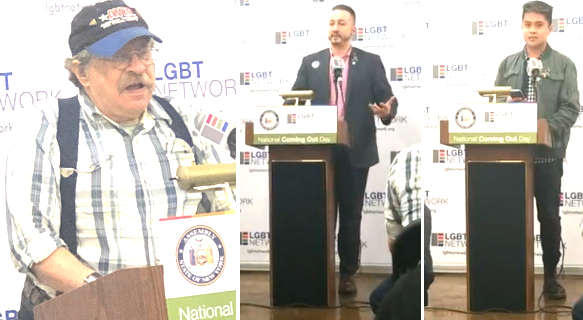 LONG ISLAND CITY, NY—Denny Meyer was the first to publicly proclaim, “I’m a gay veteran.” He was followed by Elton Lugay, who confessed he was 8 or 10 years old when he discovered the “joy of wearing women’s clothing.” Sean Ross Collins recalled how he and his boyfriend were pelted with dirt and rocks when the boyfriend’s parents found out about their relationship.

These and other community leaders, who bravely shared their stories on National Coming Out Day, were honored by New York State Assembly Member Brian Barnwell “for their exemplary service to their community.” A simple ceremony was held on Oct. 11 at the LGBT Network Queens Center in Long Island City.

Meyer, representing the American Veterans for Equal Rights as well as the Transgender American Veterans Association, came out in 1964. He came out to his friend Charlie while they were out at a street fair with “fireworks exploding overhead.”

“I was scared,” he shared. But, he was able to gather enough courage to tell Charlie, “I’m gay. You gonna punch me in the nose or what?”

No such thing happened. Instead, his friend said he was proud of him for having served professionally in the military although he was hurting inside. Denny said, “I served in silence in the armed forces.” At that time, he said if you came out gay you could be killed. If not killed, you could be interrogated for hours and discharged in disgrace.

Elton Lugay, who is the founder of the Miss Gorg transgender pageant and INQUIRER.net U.S. correspondent, said he came out at an early age when he would wear his mother’s dresses to gay pageants in the Philippines. The family pressure for him to remain straight was too strong. He experienced an identity crisis where “I would wear the mask of a straight man among friends and extended family members of strangers whenever I feared being rejected. I began hating myself and questioning God.” He met his first boyfriend in San Francisco.

Sean Ross Collins, who is Public Affairs Coordinator for the LGBT Network, said he was fortunate to have parents who were open-minded and accepted his identity. His boyfriend was not as lucky. When the couple came out to his parents, they immediately kicked him out and told him never to come back, said Sean. 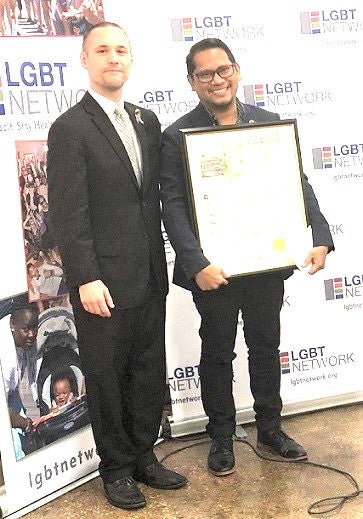 Elton Lugay receives a proclamation for his contribution to the LGBTcommunity from New York State Assembly Member Brian Barnwell. THE FILAM

“His parents reached out to dirt and rocks and starting throwing at us,” he said. “As a young gay kid that’s not a great feeling.”

Sean’s parents offered to speak with the boyfriend’s parents who pleaded, “What are we going to do to fix our sons?”

“My parents, God bless them as they knew what to do, said there’s nothing wrong with our sons. You’re the one who has to fix your problems.” The LGBT Network began a process of counselling for the parents.

Others in the audience who were moved by the outpouring of anguish and courage stood up one by one to share their stories: The family man whose wife “went berserk” when she found out and called the cops to arrest him; the Bangladeshi immigrant who was kicked out of his house by his parents and slept in parks; the activist who was sent to therapy to be “cured.”

Bartender Jovic Cruz came out on Facebook just a couple of days before National Coming Out Day. He told the audience that being gay was such a struggle so he “kept it under wraps for years.”

“Finally, I’m tired with all the hiding…Now, I had to tell the world I’m gay. People will criticize, mock or scorn but I’m not afraid anymore. I now have the strength to move forward without the fear of judgement. I deserve to be happy,” he read from his essay.

Barnwell thanked the honorees and members of the LGBT community for providing the event with “so much heart and soul.”