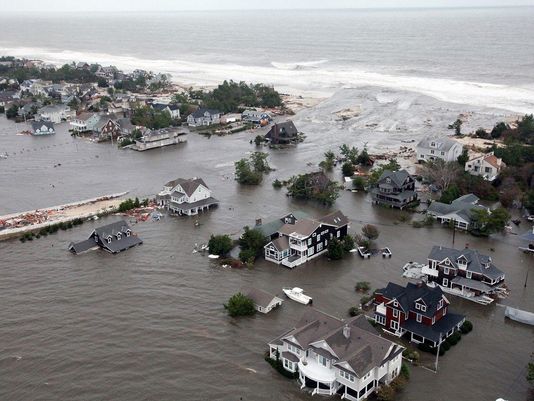 As the rain poured for hours and a nearby river swelled, Ben Gonzalez had no time to save any of his family’s belongings. Amid harsh winds that destroyed their house in Brick Township, New Jersey, he yelled at his wife and their young daughter to rush to the second floor.

In a few minutes, on the early night of August 12, 2018, 56-year-old Gonzalez saw how their living room disappeared as flood water quickly rose to over four feet. Picture frames floated, he recalled, and their television set and sofa were all under water.

“I never thought this is going to happen to us. We knew (our house) is close to the river, but it is not close enough,” he said.

Like Gonzalez, a Filipino American IT specialist, New Jersey residents have reportedly become more vulnerable to flooding in recent years. Many of them, however, remain uninformed by an understanding of climate change, environmental experts say.

Despite the frequent occurrence of flash floods, hurricanes and erratic weather conditions, it is still not uncommon to see residents—even in vulnerable communities—to have limited sense of urgency to adapt, strengthen their resiliency and prepare themselves for rising waters, extreme hot summers and cold winters, or storm winds that are now stronger and faster than 30 years ago.

The reason, according to experts, is a complex combination of politics, disparities in access to knowledge and information, social vulnerability factors and psychology.

“You think about climate change only when it directly hits you,” added Gonzalez, who refused to disclose his political party affiliation. “I am living proof of that.”

A new Gallup poll showsthat 63 percent of Americans doubt that global warming will pose a serious threat in their lifetime, and 55 percent worries only a little or not at all.

Yet, the effects of increased political polarization over the recent years, the poll says, sways the opinions of majority of Americans on whether global warming is occurring or it is caused by human activities.

Not a belief system

“I wish I could say this to everyone: climate change is not a belief system. I don’t talk and say, ‘do you believe in climate change?’ It’s about understanding it,” said David Robinson, New Jersey state climatologist, at a press briefing conducted recently by Rutgers University and Ethnic Media Services.

This year, according to Robinson, is the fifth warmest summer (average of 74.3 degrees) in New Jersey since 1895. The warmest so far in the state occurred in 2010, with recorded average temperature of 75.5 degrees.

And between 2040 and 2059, he adds, there will be about 60 percent chance New Jersey will experience more days above 95 degrees than South Carolina does today. 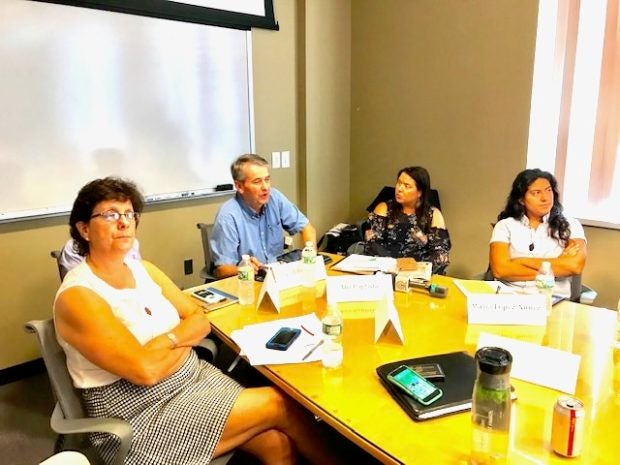 “It has been a persistent pattern,” he said. “Preponderance of evidence suggests climate change is occurring and humans are responsible for a significant portion of recent changes.”

“If we care about our children and grandchildren’s future, we have to do something about it,” Robinson said.

New Jersey—which is about 16 times smaller than the Philippines—is a home to about 9 million people, the latest U.S. census data show.

Of that population, according to research findings of Rutgers Climate Institute and New Jersey Climate Adaptation Alliance,” minority communities, poor, undocumented immigrants, the elderly, people with mental and physical disabilities are more likely vulnerable to climate change and environmental hazards.”

The findings, using a tool known as social vulnerability index, reveal that 15 percent of New Jersey counties are classified as areas of high social vulnerability. These are densely populated areas, particularly Hudson, Essex and Passaic Counties, and along the coast such as Ocean and Atlantic Counties.

Notably, the research also found that 74 percent of these high social vulnerable areas are within the FEMA-designated flood zones, impacting 724,254 people or an average density of 9,596 people per square mile.

NJ state policies on climate change have been reportedly contentious and political. 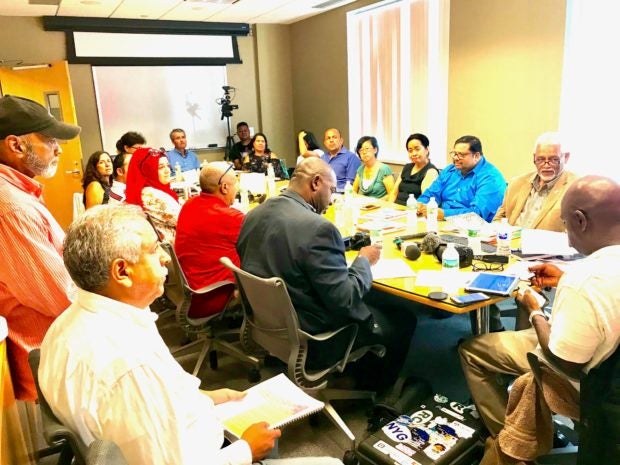 A group of ethnic media editors and reporters attending a press briefing on climate change and how it impacts vulnerable communities, which took place at Rutgers University last September. INQUIRER/Anthony Advincula

In 2010, then New Jersey Gov. Chris Christie disbanded the office of climate change within the state’s Department of Environmental Protection. Five years later, he also dismissed scientists’ warnings about the hazardous impacts of climate change.

“Hurricanes are natural—disasters are political,” said Ana Isabel Baptista, chair and assistant professor of Environmental Policy and Sustainability at The New School. “We need [environmental] policy measures in the state and change the narrative around climate change—make the links to systemic inequality in our society, not just techo-fixes.”

Still, when natural calamities occur, Baptista said government’s response to affected immigrant communities and people of color are in slow motion, but to do environmental injustice to these communities is often in a fast-forward mode.

“After the storm, there’s not even a hotline in Spanish to call,” she noted.

Garbage in the Ironbound

In the Ironbound neighborhoods of Newark, NJ, the fetid smell of garbage permeates the air almost every day, according to Maria Nunez-Lopez, environmental justice director at Ironbound Community Corporation.

Residents can even smell the bad odor over a mile radius, she adds, yet she can no longer count how many times she and fellow advocates have called out the city and state about the garbage problem that has been polluting the air in Newark.

She says the situation is an example that climate change, emergency, adaptation and preparedness plans should be discussed in a community level.

“We always approach climate change in a very scientific way,” Lopez explained. “But the problems that we face every day in our communities, while real estate developers are allowed to build high-rises in the area and garbage continues to pile up that makes flooding even worse, our city and state do not do anything about it.”