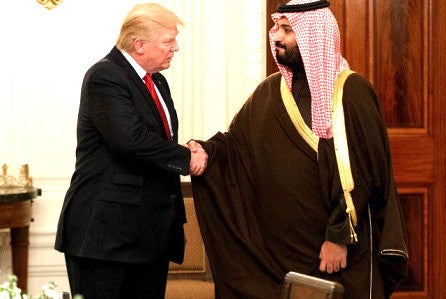 In an interview with The Associated Press, Trump compared the situation to the allegations of sexual assault leveled against Supreme Court Justice Brett Kavanaugh during his confirmation hearing.

“I think we have to find out what happened first,” he said. “Here we go again with, you know, you’re guilty until proven innocent. I don’t like that. We just went through that with Justice Kavanaugh and he was innocent all the way as far as I’m concerned.”

Trump spoke Tuesday with Saudi Crown Prince Mohammed bin Salman and Monday with King Salman. He said both deny any knowledge of what happened to Khashoggi, who entered their country’s consulate in Istanbul two weeks ago and hasn’t been seen since.

In Turkey earlier Tuesday, a high-level Turkish official told the Associated Press that police investigators searching the Saudi Consulate had found evidence that Khashoggi was killed there.

The president said that his own comment Monday about possible “rogue killers” behind Khashoggi’s disappearance was informed by his “feeling” from his conversation with Salman, and that the King did not use the term.

Also Tuesday, Secretary of State Mike Pompeo met with the king and crown prince in Riyadh and said later the kingdom had made a “serious commitment” to hold senior leaders and officials accountable if implicated in Khashoggi’s death.

Trump said he hopes the Saudis’ own investigation of Khashoggi’s disappearance will be concluded in “less than a week.”

In the meantime, international leaders and business executives are severing or rethinking ties to the Saudi government after Khashoggi’s high-profile disappearance. Trump has resisted any action, pointing to huge U.S. weapons deals pending with Saudi Arabia and saying that sanctions could hurt end up hurting the American economy.

He said it was too early to say whether he endorsed other countries’ actions. “I have to find out what happened,” he said. But his complaint about “guilty until proven innocent” and comparison to the Kavanaugh situation suggested he was giving the Saudis more leeway than other U.S. allies.

Trump said Treasury Secretary Steve Mnuchin’s trip to attend a Saudi investment conference is still on, but that it could be canceled by Friday depending on what the investigation finds.

In that case, he said, “I think we’ll also be guided by what other countries are doing.”