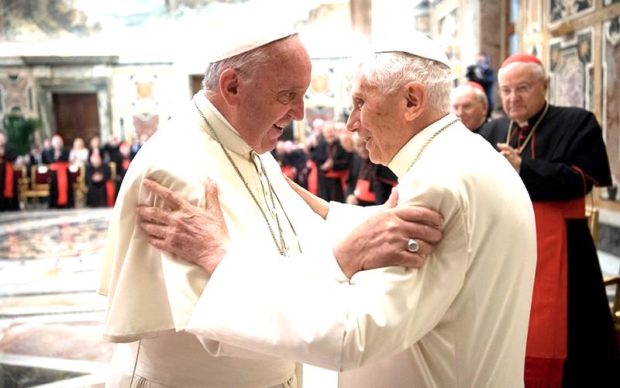 From 1981 to 2005, the work of the Bavarian Joseph Aloysius Ratzinger as “watchdog” or Prefect was the best thing that ever happened to the Congregation for the Doctrine of the Faith, the oldest among the sacred congregations of the Roman Curia (instituted in 1542). He was the best, simply the best.

As John Paul II’s confidant in the inner circle, in fact the nearest to his heart, Cardinal Ratzinger was “a major figure on the Vatican stage for a quarter of a century,” a Prince of the Church wielding an influence “second to none.”

Benedict’s third encyclical 2009 Caritas in Veritate (Charity in Truth) was so influential among global leaders that a secular business magazine, Financial Times, reported that the Holy Father’s advocacy for a fairer redistribution of the world’s wealth helped set the agenda for the July 2009 G8 summit.

So what’s in the mind of someone who, triumphantly seated in the apex of the powerful Catholic hierarchy and venerated by the world, would suddenly decide to resign? I can only surmise that a servant leader, pure and simple, is appalled by earthly power as if it were leprosy and that the Throne of Peter was meant not for supremacy but for service.

Or, pounded by multiple assaults coming from the Gates of Hell, knocked around, and worn out, our German pontiff has decided in 2013 to abdicate the supposedly life-long papacy, meaning, to renounce power when it’s time to renounce it.

On February 28, 2013, in his official farewell address to the College of Cardinals, even before the conclave, even before electing the next pontiff (reluctant Cardinal Bergoglio became Pope Francis two weeks later), Benedict XVI proclaimed:

“In your midst is the next Pope: I promise him obedience.”

By declaring so, Benedict XVI trusted that the papacy, the hierarchy, and the Holy Priesthood are rooted in the apostolic succession.

He believed that the ordained ministers today, stationed in every nation on Earth, are tasked to continue what Saints John, Matthew, Jude, Bartholomew, Andrew, James, and the other Apostles did for Jesus in their lifetime.

For many centuries, Rome has been where the Supreme Pontiff has conducted the affairs of the universal Church for the service of humanity, and within the high walls of the Vatican City is where “the oldest functioning bureaucracy in the world” can be found.

A reality check tells us that, from time immemorial, scandals and controversies follow the inner circle of cardinals, the Roman Curia, the pope himself like a loyal dog.

Imperfect men are leading the Church just as the first pope, Simon Peter, and the rest of the Apostles were not perfect, which leads us to think that Jesus was not thinking of angels or perfect men when He established His Church.

On June 28, 2016, during a Vatican celebration for the 65th anniversary of Pope Benedict’s priestly ordination, the retired pope addressed Pope Francis in these words:

“More than the beauty found in the Vatican Gardens, your goodness is the place where I live; I feel protected.”

On March 13, 2018, on the occasion of the 5th anniversary of Pope Francis’ election, the Pope Emeritus defended the current Bishop of Rome against critics and branded the wild criticism against Pope Francis as “foolish prejudice.”

Jose Mario Bautista Maximiano ([email protected]) is the author of The Church Can Handle the Truth (Claretian, 2017)