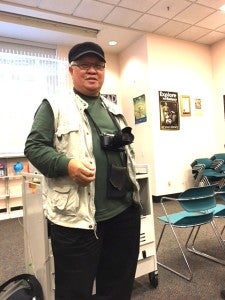 LOS ANGELES – Award-winning photographer Rick Rocamora believes that everyone is responsible for everyone else’s wellbeing.

“I document poverty by taking photos of individuals begging, peddling and hawking stuff, living in a quagmire state in Quiapo, but I don’t stop there,” the 70-year-old Northern California resident told his audience at the launching of his book Quiapo: The Rodallie S. Mosende Story on Feb. 4 at the Echo Park Library here.

“I go beyond the pictures and find their stories,” he told a group composed of former activists, community leaders and patrons of the library.

His posh, hardbound edition of Quiapo catches in black and white the harsh realities in the dirty Paterno Street’s sidewalks, which teems with young and old vendors.. It attracts readers of all walks of life and persuasions because of the poignant stories behind the photos.

In filming his subjects, Rocamora goes beyond point-and-shoot. His work always intimates a depth of emotions.

The book is anchored on the life of Rodallie S. Mosenende who had lived homeless on Paterno since birth. After Rocamora included her photos and those of other homeless vendors like her in a photo exhibit in Manila, an anonymous donor sent her a four-year college scholarship and a monthly stipend. Rocamora said during his book launching, “She is about to finish college.”

Not all his subjects “got away” from poverty like Rodallie.    Rocamora also memorializes others who failed to realize their dream of getting out of the squalor of the “armpit of the nation,” as the famous writer Jose Lacaba calls it.

“Aling Choleng who arrived in Quiapo at 19 years old, raised a family selling empty card board boxes. She died at 79 years old,” he reported. “Mang Manok who is responsible for taking care of the Black Nazarene on Paterno Street. He died of complications from diabetes.”

Rocamora added: “I captured the aspirations of the young and old street residents of Quiapo – they ask for food; they tell fortunes for the hopeless and the hopefuls like them; they ask for loans; they sleep in abandoned cars, but all of them aspire to get out of that world someday.” 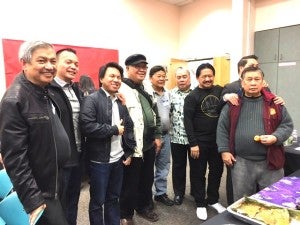 One photo titled “a Game of Chess” reflects the state of another culture in the Philippines: Islam. It has this caption: “At the entrance of the Islamic Center in Quiapo, a chess game goes on throughout the day. The ongoing war in Mindanao has forced many to move to Manila and other parts of Luzon and Visayas to have some normalcy in their lives and earn a living. Because of their names and religion, Muslim Filipinos are often victims of discrimination in housing and employment. They are forced to live in overcrowded enclaves and earn a precarious living in the underground economy.”

“I like to offer an understanding of the ‘other side’ – of religion, culture, economic condition–through my photographs,” he told his audience. He said that his role as a photojournalist is to “change the stereotypes against Muslims; about crime committed by the poor; about climate change and the environment, to name a few. I’d like to put a human face to those statistics — without the faces we cannot understand the statistics.”

He reported: “Today at a mosque in LA, I met someone from India who is hedge fund manager, who has some 1.2 billion dollars to his name. Sadly, he told me, ‘every time I travel I get held up and checked.’ In the last two weeks, I photographed two refugees detained in the airport – their father is a university professor, but they were not allowed to return to this country even though they are Americans, as American as our Filipino American kids who were born here. The only difference is most of us are Catholics; they are Muslims.”

He said he’d like to create an interactive website where children can learn about the Muslims and publish his body of work on that subject. 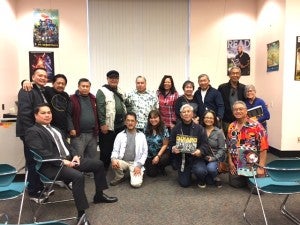 Rocamora said he also plans to exhibit his work to document that climate change is not a hoax, it affects people and their lives, their property and the human condition.

“I was once commissioned by an international agency to photograph the aftermath of Haiyan in Tacloban and distribution of donated goods, Rocamora explained. I was crying as I took photos of the typhoon devastation. I photographed a little boy clinging on to a teddy bear the whole time I was there; he was orphaned and that toy was his only link to his family. Here’s the impact of climate change in the Philippines. There were also young adults lured to prostitution as they lost everything including their families.”

He dedicated his book to his fraternity the UP Sigma Rho from his alma mater the University of the Philippines in Diliman, whose members supported the publishing of his work. His essay contributors include journalist Rene Ciria Cruz and lawyer Dan Amosin.

He said he dreams of going back to Quiapo one day and find all the faces of poverty, the subjects of his photographs, gone to a better life.