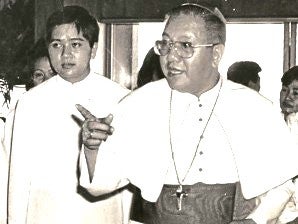 In the footsteps of his father, Ilocano politician Mariano Marcos, Ferdinand Marcos was born and baptized an Aglipayan but far ahead became a Roman Catholic.

Nonetheless, we recall how, at the height of Martial Law, the same John Paul II told the Catholic dictator in Malacañan to respect human dignity and human rights of every Filipino (Address to President Marcos on February 26, 1981).

Marcos’ administration was infamous for political corruption (the rise of cronyism and local dynasty), police-military brutality, and the first lady’s ostentatious extravagance (hence, “Imeldific” became a nasty word in the Oxford Dictionary). As President from 1965 to 1986, Marcos declared Martial Law (1972-1981) and ruled as a dictator.

Listed as one of the high-profile kleptocrats of modern history, Marcos was stricken by lupus, his body rotting while still alive. While surrounded by secured huge boxes of plundered fortune, he died a stranger in a foreign land.

Imelda Romualdez Marcos, the girl who grew up impoverished in Leyte and is now with a net worth of one billion pesos, remains on top of the list of the richest members of Congress – although the Philippine Commission of Good Government (PCGG), the New York Supreme Court, intelligent Filipinos, and in fact the whole universe have some sort of inkling where her suspicious wealth came from.

Because the anti-Martial-Law values of truth, freedom, and justice were deeply seated in the Filipino spirit and therefore not subject to external intimidation and bodily repression, Benigno Aquino, Jr., then the political archrival of Marcos, said:

“They may be able to jail my body but not my freedom,” Maikukulongnilaangakingkatawan, subalit hindi ang aking kalayaan.

Reckon how courageous priests, religious sisters (Good Shepherd Sister, Mary Christine Tan, among others) and deacons (Andres and Tayag, OSB), together with hundreds of thousands of ordinary laborers, farmers, urban poor, teachers, students, and fisher folk, opposed and struggled against the well-oiled, ruthless machine of Marcos dictatorship, many of them disappearing forever while others were martyred in brutal deaths.

Then 1986 came and Jaime Cardinal Sin passed as a bright meteor that unexpectedly lighted up the darkest heavens and captured the hearts of people worldwide, leaving them amazed and astonished by his audacity and boldness shown against a powerful tyrant.

We bring to mind how the good Archbishop of Manila, in his homilies/talks in various occasions, recollected so dearly the sacrifices offered by Father Agatep, Jesuit priests Alingaland Ortiz, SVD Father Valerio, Redemptorist Father Romano, Italian Father Favali, and Fathers Bernardo and Salac on the altar of tyrannical brutality.

Meant to evoke their memories for all eternity, which only the heartless today seem to forget and the senile cannot remember, their names are etched on the Wall of Remembrance at the Bantayog ng mga Bayani at EDSA, the most provident place of the so-called peaceful People Power Revolution, which made Filipinos beautiful among global citizens.

Also engraved on that same sacred Wall of Remembrance are the names of four valiant and uncompromising bishops who stood against Marcos abuses, namely: Most Rev. Julio Labayen, OCD, Most Rev. Antonio Fortich, Most Rev. Miguel Purugganan, and His Eminence Jaime Cardinal Sin himself.

The underprivileged, the marginalized, and the oppressed ran to them, who, knowing the risks and dangers of a military retaliation, straight away provided a sanctuary to them and those others branded as “enemies of Martial Law.”

Our good shepherds fought for social justice not against a ghost but against a historical and infamous family, the Marcoses, and cried tears of agony for the persecuted clergy, religious, and the Lord’s flock of ordinary people.

And Jaime Cardinal Sin, bishops, priests, religious sisters, the departed Martial Law victims of police-military atrocities, Benigno Aquino, the Old Men Chino Roces, Tañada, and Salonga turned on their graves as Filipinos watched in disbelief the televised interview of Juan Ponce Enrile by BBM who both made a maladroit attempt to revise the history of Martial Law and mythicize the true story of the Marcoses in the Philippines.

“God cannot alter the past, historians can,” wrote Samuel Butler (1835-1902). But intelligent Filipinos know the truth and won’t forget.

Jose Mario Bautista Maximiano ([email protected]) is the author of The Church Can Handle the Truth (Claretian, 2017) and The Signs of the Times and the Social Doctrine of the Church (Salesiana, 1992).