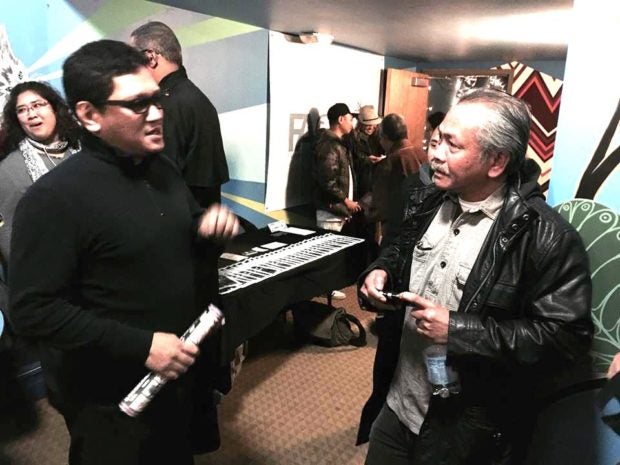 This year, FACINE will have a special screening of a selection of 39 short films from different regions in the Philippines as well as Asia, Australia, and the U.S. on Oct. 18, 1 to 5 p.m., at the San Francisco Public Library, followed by a screening of feature films from October 19 to 21 at the Roxie theater.

The selected films are also in competition for the annual awards. Several feature film awards for different categories are at stake, including Best Film, and a Best Short Film award. A $200 prize, a trophy, and certificate will go to the best film and the best short film will receive a $100 prize and certificate.

Four special programs were launched earlier this year as part of FACINE’s 25th year celebration: the 1st cineSuri: Critical Essay Writing Competition on Filipino Cinema, with amateur and professional categories to contribute in building a scholarship on Filipino film with a cash award and certificate for the winners.

All submitted essays will be published by FACINE and Philippine American Writers and Artists, Inc. (PAWA); Pinoy Klasiks, a retrospective of Philippine Classic Films to introduce to the SF film community and general public the country’s important contributions to world cinema and raise awareness of the need to save and preserve classic Filipino films. 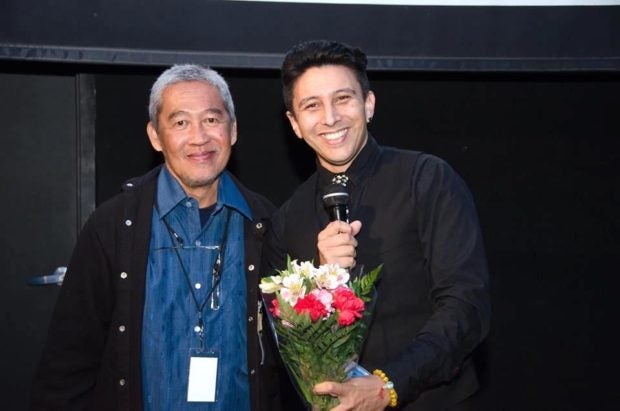 It was held at the SF Main Library with the support of the Friends of the Filipino American Center on August 19 and 26; Salin-Cine: Unang Pagtutunghay sa Larangan ng Pagsalin sa Pelikulang Filipino (Translating Film: An Introductory Look at the Art and Practice of Subtitling/Translation in Filipino Film), which sheda light on the importance of creative/correct subtitling in Filipino films, especially in the context of the Filipino film viewing experience in the diaspora.

Filipino language practitioners will participate in this project to take a critical look at the practice of subtitling or translation in Filipino films;and The Filipino, Whenever, Wherever: Films from the Filipino Diaspora featuring works by Ron Santiano and Adrian Alarilla were screened at Undiscovered SF, Filipino Creative Night Market last Sept.15.

Before it became FACINE, the film festival was called Sine! Sine! The Annual Filipino American Film and Video Festival that started in August of 1994 as part of the inaugural Filipino American Arts Exposition (FAAE)—a multi-event festival of Filipino arts and culture to celebrate the opening of the Yerba Buena Center for the Arts (YBCA). The building of the YBCA is tied to the history of Filipinos in the South of Market and the resulting displacement of the local community brought about by redevelopment efforts in the area.

“FAAE was the offshoot of community pressure to Yerba Buena to give back to the community,” says FACINE founder and director, Mauro Tumbocon, Jr. “The history of Filipinos in the South of Market is very contentious, because before YBCA was built, as part of the redevelopment agency initiative, maraming mga (many) residential buildings, SROs, which housed Filipino immigrants then na giniba (were demolished). So, when YBCA was finally built, that was really in relation to the history of Filipinos in SOMA.”

FAAE was the first time the Filipino community had come together to celebrate on a large scale the presence of Filipinos in the SOMA and in San Francisco.

“It was the biggest Filipino exposition in the U.S.”

Tumbocon was then living in New York City after moving from Florida through the encouragement of his friend, the acclaimed filmmaker, Lav Diaz, then also based in NYC.

“Tumawag sa akin (He called me), ‘Pumunta ka na dito sa NY, marami tayong magagawa (Come to NY, there are lots that we could do).’”

Before migrating to the U.S., Tumbocon and Diaz were colleagues as journalists for the Philippine newspaper Taliba. Tumbocon had a column on Philippine films and Diaz was his editor who ran the entertainment section of the paper and wrote music reviews.

Meanwhile, in SF, two months prior to the launching of the FAAE, there was still no program in place for the film component of the exposition.

The organizing team of FAAE, in a last-ditch effort, reached out to film scholar, critic, and educator, Joel David who turned down the offer to organize a film festival since he was then on a graduate program at NYU. But he had someone else in mind.

“Sabi naman ni Joel (Joel said), ‘I can’t possibly do that, I’m in school. But there’s somebody here who I must recommend.’ And that was me.”

They sent Tumbocon a one-way ticket to SF in May of 1994, and he was able to organize the film festival component of the exposition in a record of two months.

“Malaking bagay kasi (It was a big deal because) the [YBCA] screening room at that time was really scheduled to do a one month festival of films. So, grabe yung pressure (there was too much pressure).”

Tumbocon credits his success in putting together a major film festival at the last minute to his network of friends in the Philippine film industry as well as friends he made in the U.S. These nurtured relationships as well as community support are vital components to the 25-year longevity of FACINE.

“It’s really through connections. You invest in relationships, and it takes years to build relationships. When I migrated here, I remained in contact. Wala pang email noon, ha (there was no email then). So, when I was tasked to do the film festival, it came easy.”

Sine! Sine! was the first Filipino film festival of its scope organized in the U.S. It showcased a mix of Philippine productions and Filipino American works in two parts: a series of short films and videos at YBCA and accompanying screenings of feature length films at the Asian Art Museum (that was then at Golden Gate Park).

“I was able to gather nine feature length films shown in 35mm format. Looking back, that must be the first and the last time that these films were screened in 35mm in the U.S.”

Among the selection of classic films from the titans of the golden age of Philippine cinema that were screened were Ishmael Bernal’s Himala (Miracle), Eddie Romero’s Ganito Kami Noon, Paano Kayo Ngayon (This Is How We Were Before, How Are You Doing Now), and Lino Brocka’s Orapronobis (Fight for Us). Among the Filipino American films shown were works by Rhacel Salazar Parreñas and Linda Mabalot.

Tumbocon takes pride in having screened at the inaugural film festival Lav Diaz’s lost first feature film, Sarungbanggi ni Alice (Night of Alice), a documentary about a Filipina immigrant working as a bookseller in the streets of NY and a victim of domestic abuse.

“The work that he did may already have defined his aesthetics, and the subject of the disenfranchised. It could have been the first and last screening of the film in the U.S.”

The film festival became The Annual Filipino American Film Festival and Competition on its fourth year after leaving the FAAE due to dwindling funds. It was held at the SF Main Library that became the festival’s venue for 15 years. At that point, the festival was scaled-down and has remained as such since then.

“It was a decision needed to be made as whether to continue or not.”

What gave Tumbocon the motivation to continue the festival is the notion that Filipinos and Filipino films are often overlooked and neglected.

“There is a perspective that I share with a lot of Filipino Americans that even in the rubric of the Asian American community, Filipinos were always at the bottom. Never in the history, other than that year of Flip Sideand The Debut,that a Filipino American film made it to either opening or closing film in a festival; meaning it was not always highlighted. It’s always East Asians that dominate it. I don’t want to push, but that’s the reality. They will never see us through our own eyes. There’s always a Filipino in there right? It’s a token to be considered Asian. That explains why we continue FACINE, by hook or by crook.”

Through a flurry of circumstances and budget constraints, the film festival was ever shifting, with stints at the City College of San Francisco, Pacific Film Archive in Berkeley, and Bindlestiff Studio. 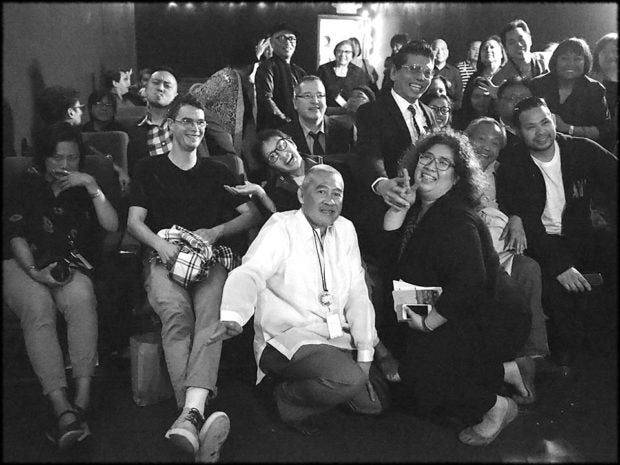 Eventually, Tumbocon incorporated Filipino Arts and Cinema International (FACINE), a non-profit that became the festival’s namesake starting on its 18th year to the present. He has been running the festival with the help of a team of volunteers and the support of the community through the years as an audience and in raising funds.

In spite of the all the challenges, what remained constant is Tumbocon’s conviction to continue what he started a quarter of a century ago.

“There was a time when non-Filipinos would approach me and say, ‘Why an ethnically specific film festival?’ Well, because we can do it. Why not?”

Through the festival and the evolution of film formats, from celluloid all the way to digital, Tumbocon was able to see the growth and development of Filipino American Cinema as well as the rise of independent film and regional film in the Philippines.

Dubbed asPilakula, a combination of the word pilak (silver) and pelikula (film), FACINE’s silver anniversary is an occasion for Tumbocon to ruminate on an enduring legacy of showcasing Filipino films and finding joy in the triumphs along the way, no matter how small.

“It’s only now dawning on me what those 25 years mean. Personally, it was also a journey. The festival went through ups and downs, from homeless to having [a venue]. At least, naipagpatuloy ko kahit homeless ako at one point (I was able to continue it even though I was homeless at one point). I’m happy that we were able to come together and make it to the Roxie. It’s heartening that a mainstream [venue] like the Roxie has accepted us as a member of that community and, finally, the San Francisco film community. I mean, those satisfactions… it’s small but it’s worth it.”

For information and tickets visit: www.facine.org