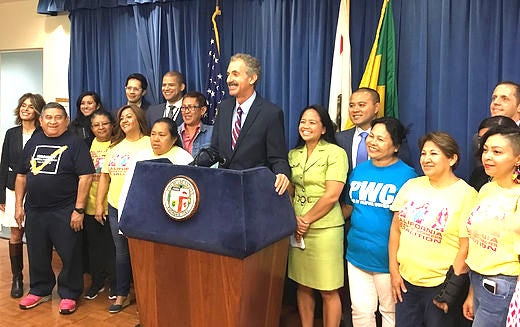 LOS ANGELES – The city attorney has reached a settlement with a San Fernando Valley home care provider that allegedly failed to pay its employees minimum wage and overtime.

Emelyn Nishi and her companies Health Alliance Nurses Corp. in Van Nuys and Hand Homecare Provider Inc. in Canoga Park have agreed to pay $250,000 in restitution to settle the allegations. The defendants have also agreed to paying $100,000 in civil penalties and costs.

Nishi and the companies allegedly paid its employees, mostly Filipino immigrants, as little as $5.50 per hour or less. In addition, workers were allegedly pressured to falsify time records to hide overtime work. They were also allegedly threatened with termination or blacklisting.

“Hardworking men and women have the right to a minimum wage and overtime. No worker should be forced into poverty because an employer denies them these rights,” Feuer said in a statement.

“After organizing for nearly three years to win dignity from Health Alliance Nurses Corporation, caregivers together with the Pilipino Workers Center celebrate this settlement as a victory,” said PWC Executive Director Aquilina Versoza-Sorianoin a statement.

“This resolution sends a message to the private homecare industry that these common employment practices are illegal and that agencies must come into compliance with the law — both to honor the dignity of caregivers and to ensure quality of care for consumers,” she added.