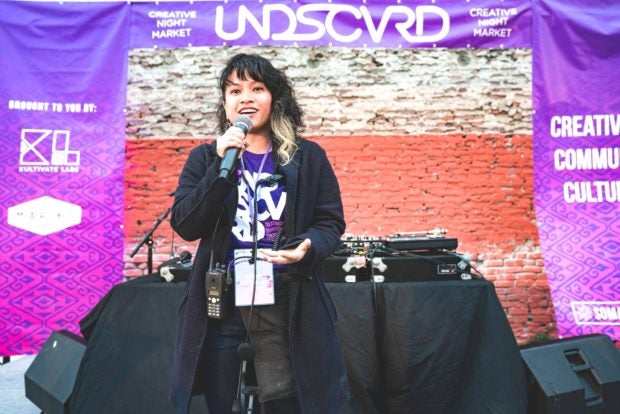 Gina Mariko Rosales at an Undiscovered SF event where she became inspired to create the first Entrepinays conference. CONTRIBUTED

SAN FRANCISCO — When Gina Mariko Rosales started her event planning business, Make It Mariko, she worried if she had what it took to become a successful entrepreneur. At the time, her entire support system consisted of two Filipina entrepreneurs. A friend later invited her to an event for Filipino business owners where she became inspired.

Now she has initiated the first very “Entrepinays” conference, an all-day event filled with workshops, panels, activities, and community spirit. Entrepinays will be on Oct. 7 from 9 a.m. to 7 p.m. at COVO in San Francisco and is limited to 100 participants.

Nine business women will start off the event by sharing their trials and successes. Workshops and panels on best practices will take place throughout the day. Successful pinay business owners will headline the event, including Chera Amlag from Hoods Famous Bakeshop, Joanne Encarnacion of @gofitjo, and Rosales’ mentor Irene, Fay Duller, a professor from the University of San Francisco and San Francisco State University. Filipina entrepreneurs who will be on the Decolonizing Business panel. CONTRIBUTED

Rosales gained the confidence to organize Entrepinays after she planned a launch party for the first Filipino night market initiated by Undiscovered SF founder Desi Danganan. After a year of participating in Undiscovered SF, Rosales realized there were many Filipino entrepreneurs in the Bay Area. As a business owner, she wanted to find other Pinay entrepreneurs and unite them after seeing how critical it was to have a supportive community to become successful.

“And so that is how the idea of the conference started,” Rosales explained. “That was just me feeling this pride of being a Filipina entrepreneur wanting to spread the word to others out there about SOMA Filipinas so they can have the pride too. I don’t know where I would be today if it weren’t for the supportive Pinays in my life who keep me grounded. So, I wanted to build this community even further.” Rosales believes that Pinays who run their own business and a support system should attend the conference. A Facebook group called “Entrepinays,” where members can, bouncing off ideas with each other, is in the works, so is a directory of Pinay business owners.

“This is the year of the Pinays. It is our time. A lot of us are stepping into power now and we are going to lift each other up.” Rosales stated. “As Pinays, we do a lot. We’re running our business, going into communities, helping run our families. Filipino families are matriarchal and you’re being pulled in all directions. So it’s about how we find wholeness in this relationship,” Rosales pointed out.

Tickets range from $55 for startup entrepreneurs to $75 for Pinays who run businesses with three or more employees. Scholarships are available for Pinays who cannot afford the ticket price or they do not have their own business yet but are aspiring to. Visit www.entrepinays.comfor more information.

LATEST
Cryptoverse: The beacon of the NFTs
US Treasury yield curve inverts again: What is it telling us?
How Americans are boycotting companies now
Tesla closes an office as layoff strikes Autopilot jobs
Oil plunges $6 as recession fears heighten demand concerns
What is ‘interactive process’ in worker requests for accommodation?