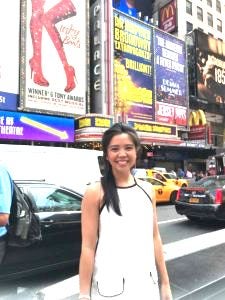 NEW YORK — Catherine Ricafort last year won the Gypsy Robe (renamed Legacy Robe) when she was with “Miss Saigon” because she had the most Broadway shows under her belt. This year, the triple threat performer joined her eighth Broadway show: “Spongebob Squarepants.”

For Ricafort, an industrial and systems engineering graduate from the University of Southern California (USC), this is the closest she has gone as far as mixing her two major interests in life, education and entertainment.

Ricafort plays the role of Karen, the computer. She is the contravida, the villain, but she is likeable and funny.

“This role is particularly exciting because it is a character that many people have known and grown up with watching the TV show all these years so it is a challenge to honor that original character and also make it my own,” she relates.

“It is great to be a villainess. I’ve never been the villain before. I am scheming with evil plans and trying to make things go wrong. This is one of my favorite roles I’ve played on Broadway so far,” she added.

Ricafort made her Broadway debut in 2011 with “Mamma Mia,” and for anyone who is counting, she has also appeared on “Honeymoon in Vegas” (as the scene-stealing island girl who sings Friki Friki), “Cinderella,” “Allegiance,” “Disaster!,” “Holiday Inn,” the new “Irving Berlin Musical” and “Miss Saigon.”

As in her previous shows, Ricafort instantly bonded with her fellow cast members. They share their particular love for Spongebob and it shows in each of their dressing rooms. 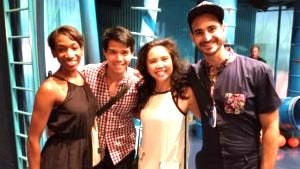 “I was blown away,” Ricafort said. “There’s Spongebob stuff everywhere. People clearly love the whole essence of Spongebob, we have pictures of him, standee dolls, an inflatable pineapple. The cast keeps it fun on stage and off.”

The show has a strong and passionate fan base from across the globe and they share their love for the characters by sending their fan art to the cast, and it is one of the things that Ricafort said she’d miss once the show ends its run in a couple of weeks.

“I’ve never been in a show where we got so much hand-drawn fan art,” an amused Ricafort told us. “Kids from across the world mailing in their drawings of us and our characters and I feel so touched that our show touches children this way.”

Doing the show eight days a week and performing for different sets of fans made Ricafort realize that Spongebob is a unique show that is loved by everyone from children to their grandparents. (The musical ran its final Broadway performance Sept. 16, but it will go on a national tour.) 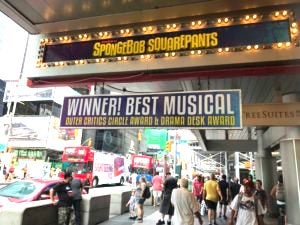 “Spongebob Squarepants” was Catherine Ricafort’s latest gig; she played the villainess. It will soon go on a national tour. AJ PRESS

She relishes in the fun and laughter in the theater, saying that making people laugh, gives her that feeling that is so energizing..

Through her role as Karen, she was able to do comedy again, something that she effortlessly did with Honeymoon in Vegas in 2015.

“Next time I’d like to do something that’s more singing heavy role. I’ve done a lot of dancing on Broadway and on this show, a lot of acting,” she shared. “This is one of the biggest parts I’ve had on Broadway so I am excited to see where it takes me next.”

Prior to Spongebob, Ricafort went to a software engineering boot camp and armed with an engineering degree, she went back to school to enhance her computer science skills, keeping that option open.

After eight musicals on Broadway, she has amassed experience that when she is asked for advice by aspiring thespians, she has a ready response.

“I have lots of advice but my biggest tip is that you want to really embrace who you are. Once people start auditioning in New York, they get intimidated and they try to exactly fit what they think the role, the show is asking for,” she remarked.

“I have found that just by being me, I am really letting that shine through the material because there are hundreds of other people reading the same exact material you are reading. That’s how you can be unique and stand out.”

Her other tip?  You have to be extremely versatile as possible. 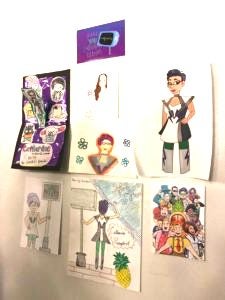 Loyal fans of the show sent the cast fan art, which they display in their respective dressing rooms. Here are some of Karen, The Computer art work that Catherine received. AJ PRESS

Musical theater asks you to do a lot of things.

At Spongebob, there are characters who are not only singing, dancing and acting, they’re tap dancing and skateboarding, they’re flying through the air, acting like a computer.

“You have to be very game. I try to get a lot of different skills and I show all of that plus my personality and it always seems to work out well in the end,” she said.

And that’s the genius thing about Spongebob, according to her.

The musical has somehow lifted a beloved two-dimensional cartoon into a three dimensional human story about community coming together.

“Our cast is one of the most diverse casts that you will see. I am proud that the role I am playing has nothing to do with what I look like but it’s just how you can act,” Ricafort said.

“I am proud to be representing Filipinos here in Spongebob because it is one of the highly desired to see shows on Broadway and we have people from all over the world seeing it.”