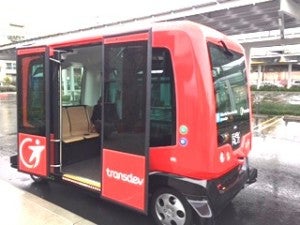 LOS ANGELES — What is the likelihood of self-driving vehicles becoming operational in our lifetime?

“Self-driving vehicles are coming soon, but only if stifling regulations don’t get in the way,” averred officials of the Alliance for Transportation Innovation (AT121).

In a roundtable with regional transportation officials and the media on Feb. 6, AT121 President and CEO Paul Brubaker said federal rules and those in some states are hindering the deployment of self-driving vehicles.

During this session, the public got a view of the Transdev EZ10, an electric self-driving shuttle, which was at the latest stop in its coast-to-coast itinerary that has included, Georgia and Arlington, Texas thus far.

The driverless vehicle was brought to the city as part of the cross-country Autonomous Vehicle Road Trip announced last January at the Consumer Electronics Show in Las Vegas by ATI21.

“The problem is most people have only heard news reports about these revolutionary technologies, said Brubaker. “When it comes to self-driving vehicles, seeing is believing.”

Outside of the roundtable, one of AT121’s partners, Easy Mile, offered reporters a ride in its self-driving shuttle, a 12-person bus that navigated its way through a course set up outside the Los Angeles Cleantech Incubator (LACI) at the La Kretz Innovation Campus in the Arts District in downtown Los Angeles.

The three-acre campus is owned by the Los Angeles Department of Water and Power and managed by LACI, a non-profit partnership that support entrepreneurs and clean-tech startups in the Los Angeles area.

ATI21 is a Washington, D.C-based association advocating for adoption of innovative technologies to reduce traffic deaths, improve the flow of urban commutes, eliminate human error and improve mobility for the disabled and elderly communities.

Brubaker expressed his organization’s optimism that “self-driving vehicles will change the way we live, work and play. They will improve safety for motorists, cyclists and pedestrians alike. And they will reduce costs associated with the loss of life and property, traffic congestion and delays.”

The EZ10, which can seat six with standing room for another six passengers, has a maximum speed of 25 mph and cruising speed at around 7-10 mph.

“The shuttle felt like the early LA Metro Dash bus only much smaller, which provided easy access on and off the vehicle. It’s cool,” said Lewis Chen, a Los Angeles student who happened to be in the area and decided to check out the event despite early morning rains.

EZ10 features include the ability of the shuttle to stop automatically when detecting obstacles in its way, using a laser detection system known as LIDAR and enabled by EasyMile software and vehicle control using “enhanced GPS technology.” 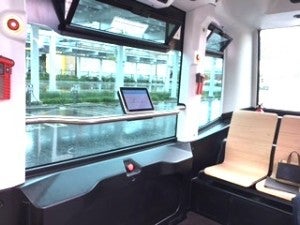 Look, Ma, no driver! Inside the self-driving shuttle. INQUIRER/Dante Ochoa

While various private companies, domestic and international, are already getting closer to coming up with operational and manufacturing breakthroughs, industry stakeholders agree that acceptance by the public of the self-driving vehicles depend largely on safety and reliability of technology, not to mention regulatory hurdles from the federal and state and local authorities.

The consensus among stakeholders is that the industry cannot afford a “patchwork of regulations.” They said regulation-making on self-driving vehicles is reserved for the lowest level of government down to the city level. This will result in uncertainty in the industry and affect funding sources needed for further research and development.

ATI21 has released a National Strategic Framework aimed at informing President Donald Trump and the federal government administration of the critical need to advance self-driving technology to greatly reduce the number of vehicular accidental deaths which number to 30,000 per year and estimated to climb to 40,000 by the end of 2016.