The dimming of democracy’s lights

The dimming of democracy’s lights 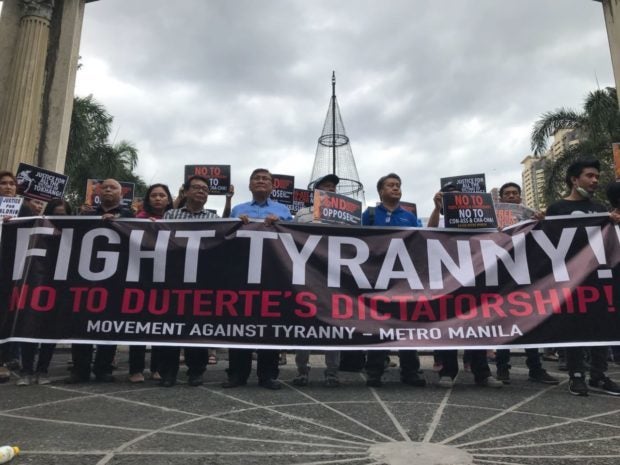 YORK—Forty-six years ago, President Ferdinand Marcos signed Proclamation 1081, suspending the writ of habeas corpus and declaring martial law, initiating a 14-year reign by the power-hungry and corrupt autocrat. Very quickly Imelda Romualdez Marcos became a center of power in her own right, leading to what pundits described as His and Hers governments. Thus, through the would-be Tsar and Tsarina, a host of parasitic relatives, cronies, and hangers-on fed from the public trough.

Marcos signed the decree most likely on the late night of September 22,1972, backdating it to the 21st. Apparently, this native son of the Ilocos region was a believer in numerology—7 was his lucky number, and any number divisible by it, which 21 is. The presidential yacht, for instance, had 777 emblazoned on its hull.

Like all dictators, he justified martial law and his own one-man rule in order to protect the integrity of the republic, citing the threat of a Communist takeover and, more immediately, an assassination attempt on Defense Secretary Juan Ponce Enrile (that turned out to have been staged) on September 21. Ironically the government’s ham-handed decree and the myriad abuses that followed, including salvagings (as extrajudicial killings were referred to at that time) fueled, rather than stifled, the growth of the Maoist New People’s Army and that of the Moro National Liberation Front.

The Marcoses were ousted in February of 1986, when an aroused populace declared, Enough! Through a spontaneous, nonviolent uprising that came to be known as People Power, the country was saved from further degradation, democracy was restored, and the path to a better future lay clearly ahead.

Or so we believed.

And for a while the prospects looked undeniably bright, and People Power even became a model for other beleaguered democracies elsewhere. We believed that simply throwing out the Marcoses would do, not recognizing, or refusing to recognize, that while extreme, they were the symptoms and not the cause of a deeper malaise. While some of that ill-gotten wealth has been recovered, though hardly enough, not a single crony has gone to prison, and the vultures who still are with us enjoy their luxurious lives unhindered by law or by their consciences.

Today martial law is in place in Mindanao, with the real possibility that the little man in Malacañang will extend it over the whole country, even though the conditions that would justify it do not exist. The Marcoses are back (though they never really left), Congress is mostly made up of toadies, and the Supreme Court has essentially foresworn its independence.

As a nation we have a terrible habit of cultivating national amnesia, complacent in our cribs either of comfort or clan or cynicism, brushing aside the hard truth that for government to be of the people, for the people, and by the people, takes a lot of hard unstinting work.

There are signs, however, that the people are coming to their senses, alarmed by this administration’s inexorable dimming of democracy’s lights. In Manila, between 5,000 to 10,000 protesters marched against the Marcos-Duterte tandem. From a correspondent in Manila who participated:

“After Mass in San Agustin Church in Intramuros where a couple of Bishops and a dozen priests celebrated Mass attended by the protesters, we marched to Luneta through the narrow streets of Intramuros—where I was half-expecting Rizal or Padre Damaso would emerge from the doorway of some building.  At Luneta, Left and Right mingled in the same cause, the Left with many red flags and the Right with some rows of nuns in their white garb and black veils and seminarians in their white soutanas or brown garb (Franciscans) as the most obvious symbols.

“It was well organized with a stage and video screen set up on Roxas Boulevard right in front of the Rizal monument where Chief Justice Sereno spoke and a nun delivered Senator Leila de LIma’s message, among other speakers like labor leaders.  A long row of policemen separated us from the pro-Duterte crowd which supposedly occupied the field in front of the Quirino Grandstand.

That same day a similar protest rally, organized by Malaya, was held in Manhattan, outside the Philippine Center on Fifth Avenue, where those gathered were informed of  the International People’s Tribunal’s guilty verdict against Duterte for crimes against humanity, and the “violations of the socio-economic rights of the Filipino people, and how the Duterte administration’s anti-drugs, anti-loitering, and counterinsurgency programs have terrorized Filipino citizens, particularly the most marginalized sectors, including the urban poor, indigenous peoples, laborers, and peasants.”

Still, we lurch from crisis to crisis. One of the themes in the just-released film Goyo: Ang Batang Heneral(Goyo: The Boy General)—on the brief but heroic life of Gregorio del Pilar who died fighting the Americans at the age of 23—is that the impression the colonizers had of us, that we were like children, may have been accurate after all. It is a thought placed in the imagined mind of Apolinario Mabini, as he reflects on the infighting that plagues both the Philippine revolutionary forces and Aguinaldo’s government.

The film, directed by Jerrold Tarog and a worthy sequel to Heneral Luna, which he also directed, has a lot to say about contemporary Philippine society.