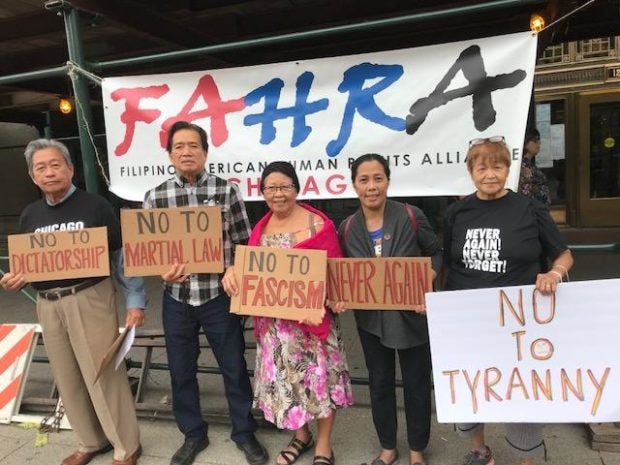 Septuagenarian-veterans of anti-Marcos Dictatorship are back on the picket line Sept. 21 to protest the impunity and repression of the Duterte regime. Pictured are FAHRA members (left to right) Ray Villar, Ven Capili, Leila Villar, Leila Panlilio and Sally Velasco Richmond. PINOY

CHICAGO—“Never again!”  “No to Martial Law!” These are some of the catch-phrases that reverberated on the sidewalks of Michigan Avenue, called the Magnificent Mile in this city, on September 21.

Some 50 Filipino American activists picketed and marched around the block where the building that houses the Philippine Consulate is located. It was after five in the afternoon on the last day of summer, a chilly day to start the weekend in the Windy City.

But septuagenarian-veterans of the 1970s anti-martial struggle, mostly affiliated with the Filipino American Human Rights Alliance (FAHRA), tried to keep up with the more energetic students belonging to a more radical group, Malaya. They came together in a spirited commemoration of the 46th year anniversary of the imposition of martial law by Ferdinand E. Marcos.

City workers on their way home could not help take notice of hand-made placards saying “Defend press freedom,” “No to fascism!,” ”Stop violence against women,”  “End extrajudicial killings,”” to mention a few. They also walked around protesters playing dead on the pavement, a street drama performed by the actors of Circa-Pintig, a progressive performing arts group, to highlight the impunity and violence prevalent in the present Duterte regime.

While actor Levi Aliposa incessantly hit a ganza—a metal indigenous gong— FAHRA spokesperson, Ana Guevarra, read a list of demands, eliciting loud response of “Never again!” for each item read.  But the list failed to reach the hands of consular officials who had gone home by the time the rally began. 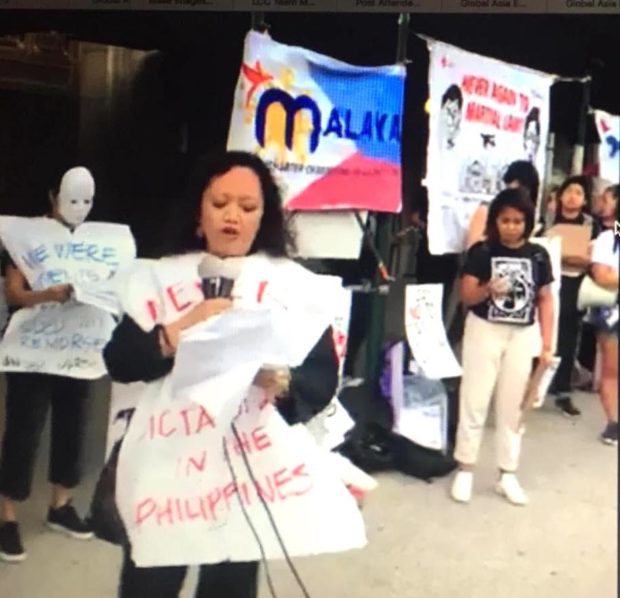 CIRCA PINTIG director Dr. Anna Guevarra reads the “Litany of the Nation” list of demands during a September 21 rally in Chicago to protest extrajudicial killings and curtailment of democratic rights under the Duterte regime. JERRY CLARITO

The local protest was in sync with dozens of protests held by Filipinos abroad to remind others—notably millennials—that the promises of then President Ferdinand Marcos on Sept. 21, 1972 when he imposed martial law that he would bring peace and order and economic prosperity to the Philippines only brought gross violations of civil rights, widespread corruption, and economic bankruptcy to the Filipinos.

A 75-year-old activist, while trying to fend off the cold wind on the early Friday evening and struggling to hold both a black and white photo of a victim of state violence and a small sign with “Never Again!” scrawled with pentel pen, sadly said in Pilipino, “It is actually happening again. Only after two years in power, the EJKs under Duterte are six times more of Macoy’s 14-year dictatorship,” he wryly said.

“We have to be constantly reminded,” he added.

(Editor: Alfred W. McCoy, an American historian and eminent professor of history at the University of Wisconsin-Madison has published extensively on the colonial and post-colonial history of state repression, the military, and policing in the Philippines. The 3,257 figure appears in two major books authored by McCoy – A Question of Torture (2006), and Policing America’s Empire (2009). In the latter work, McCoy describes in detail how martial law enabled Philippine police and military forces to operate with impunity and engage in systemic human rights abuses. On page 403, he writes: “Under Marcos military murder was the apex of a pyramid of terror with 3,257 killed, an estimated 35,000 tortured, and some 70,000 arrested.”)

(Senator Antonio Trillanes said on Feb. 21, 2018 that the death toll in the government’s war on drugs has now surpassed 20,000 since President Rodrigo Duterte came to office in 2016.

In a speech before the Philippine Senate, Trillanes said the Duterte administration’s own report shows 3,967 “drug personalities” have been killed after allegedly resisting arrest during police operations between July 1, 2016 and November 27, 2017.

“The report also said 118,287 drug personalities have been arrested, and 1,308,078 others surrendered to authorities during the same period.

All figures were listed as “accomplishments” in the official document titled Fighting Illegal Drugs: #RealNumbers.

Based on the government report, this means the real number of deaths related to the drug war is at least 20,322, Senator Trillanes noted.)