The ceremony gave appropriate dignity to the dual citizenship application process, the

the motivation of San Francisco Consul General Henry Bensurto Jr. for the oath-taking at the consulate’s Kalayaan Hall, which Bensurto himself administered.

Gone are the days when reacquiring Philippine citizenship looked look like an uneventful fast-food transaction with no emotional dimensions.

The recent new dual citizens were first given reminder-briefings by the Social Security System’s given Marites Marin and the Department of Tourism’s Pura Molintas on what dual citizens should know.

In his speech before the oath-taking proper, Bensurto  impressed upon his audience that through Republic Act 9225 one can become a Filipino citizen again, regardless of motivation, as long as one is able to prove that he or she was a natural-born Filipino before acquiring another citizenship. Consul General Henry Bensurto Jr., who administered the oath of allegiance, believes that the “Filipino in us is in the blood that runs through our veins, an integral part of our being that cannot be not easily erased by any political or legal act.” INQUIRER/Jun Nucum

“The Filipino in you is not based on the ink and paper or the color of the passport. The Filipino in us is in the blood that runs through our veins, an integral part of our being that cannot be easily erased by any political or legal act. Thus, you may have lost your Filipino citizenship in the past in the legal sense but never in words, deeds, and in your hearts,” Bensurto explained. He has some 1.3 million Filipinos under his consular jurisdiction.

“I hope that your reacquisition of Philippine citizenship also stems from your desire to reconnect with your Filipino heritage and your aspiration to be part of nation-building. The challenges of time demand that we unite as Filipinos, wherever we are, whatever citizenship you have regardless of the political boundaries.”

Bensurto later reiterated that the Consulate “should not just process, but also inculcate love, passion for what is Filipino and must return the dignity that the reacquisition of Filipino citizenship deserves.”

During the ceremony, people were visibly happy and emotional. They understood the solemnity and seriousness of the event. In fact, they sang Lupang Hinirang very well. 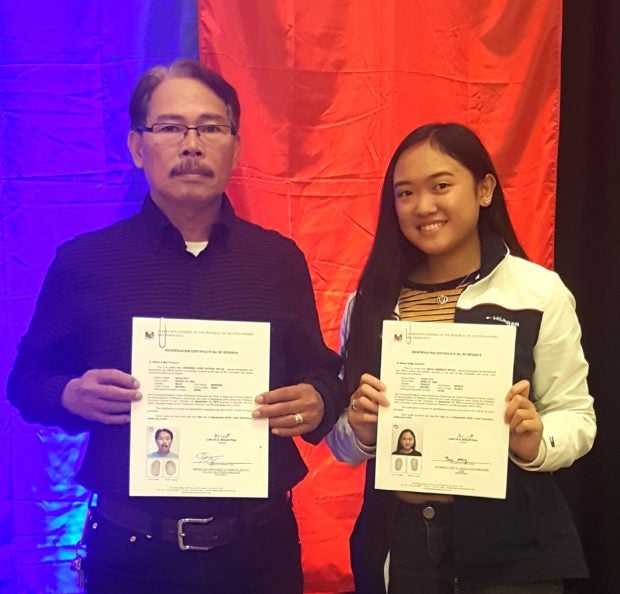 Father and daughter Gerardo (left) and Erica Artuz can now stay longer in the Philippines for retirement and higher studies, respectively.  INQUIRER/Jun Nucum

Those who are now dual citizens once again enjoy full civil and political rights under existing laws of the Philippines, including the following:

• right to own land and property in the Philippines

• right to engage in business or commerce as a Filipino

• other rights and privileges enjoyed by Filipino citizens

Malate Manila-born Amadeo Agetano, who at 87 was the oldest dual citizen candidate in his batch, has been an American citizen for at least 10 years and now lives in San Francisco. “I no longer work, and although I am getting pensions here and in the Philippines, I cannot save enough. I hope to also bring about the merging of Filipino and American cultures even amongst my family members while I am still alive,” Agetano intimated. Dr. Yvette Nonato has always been proud to be a Filipino, the main motivation for her to be involved with helping the World War II veterans awarded their Congressional Gold Medals.

The octogenarian also wished that Philippine President Rodrigo Duterte would be able to really bring about positive changes in the Philippines that many are truly longing for and expecting from him.

U.S. citizen Gerardo Artuz, originally from Naga City Camarines Sur and a resident of Vallejo, California, now wants to stay in the Philippines as he anticipates retiring in two years.

“I can now savor fresh fruits, vegetables, food that we have in the Philippines. Life is not stressful there with a more laidback lifestyle. I want to be and retire where I was born,” an excited Artuz said.

Gerardo’s daughter, 18-year-old daughter Erica, who also born in Naga City and has been in the U.S. for two years, availed of dual citizenship as she wants to go to college in the Philippines, either in University of Santo Tomas or Far Eastern University.

“I want to stay there in the Philippines while I finish college. It has been my dream to study in Manila even though I became an American citizen. As a dual citizen, I can also stay long for my vacation in the Philippines, unlike now that there is a limitation on how long I can stay there,” Erica reasoned. 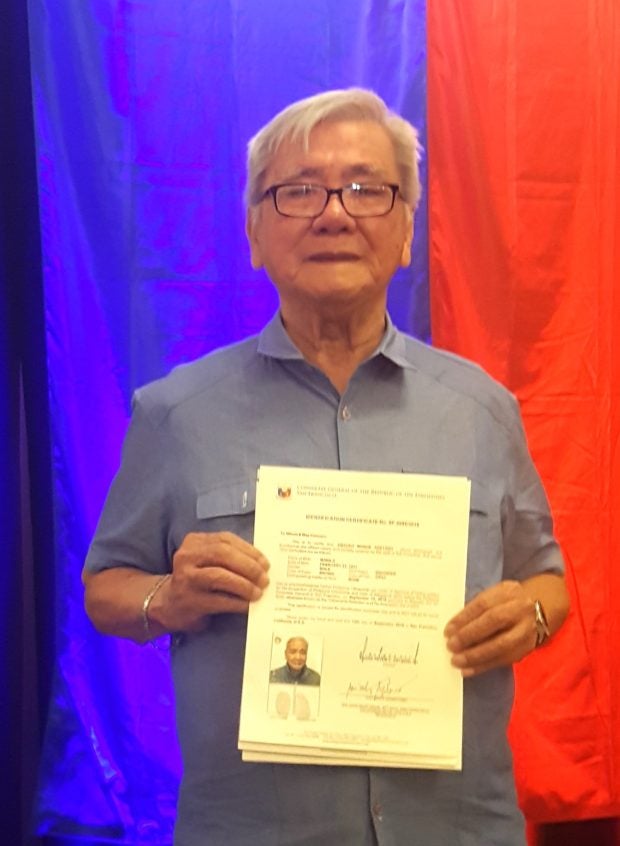 Octogenarian Amadeo Agetano hopes to serve as the bridge of the members of his family to bring about the merging of Filipino and American cultures while still alive. INQUIRER/Jun Nucum

Cavite-born Dr. Yvette Nonato of Sacramento, a physical rehabilitation specialist, pushing has been an American citizen for six years. She admitted that she availed of dual citizenship because “renewal of my Philippine physician license requires me to be either a Filipino citizen or a dual citizen.”

“It so happened that I got an appointment for the oath-taking just as I was attending a conference here in San Francisco, so I grabbed the opportunity,” explained Nonato. “What I consider most important for me is being able to practice medicine also in the Philippines. I can help more people there when we conduct medical missions for those in far-flung areas who cannot afford to go to the hospitals.”

Nonato also said she was extremely happy to be a dual citizen for she has always been proud to be a Filipino, which pushed her to be involved in helping the World War II veterans get their Congressional Gold Medals.“It is part of our history, even though my own father has gone before this much-deserved recognition was given.”