NEW YORK–A federal judge certified as a class Filipino nurses who worked for New York’slargest network of nursing homes, which is being sued for human trafficking.

This means any nurses recruited since Dec. 23, 2008, by the Philippines-based staffing agency Sentosa Services to work for Golden Gate Rehabilitation and Health Care Center on Staten Island and Spring Creek Rehabilitation and Nursing Center in Brooklyn, are part of a class action and do not have to file individual lawsuits against the nursing care network.

U.S. District Judge Nina Gershon of the Eastern District of New York approved the certified class, reported Law.com. The care facilities are part of co-defendant SentosaCare network, which was previously sued over employment terms for nurses recruited from the Philippines. Nurses say they had to stay with the company or face getting hit with $25,000 lawsuits. 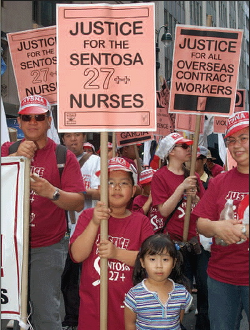 Paguirigan’s suit names SentosaCare’s facilities in Brooklyn and Staten Island, but the class may now include Filipino nurses who went to work for 15 of the company’s facilities across the state, according to Law.com’s report.

Elliot Hahn of Hahn Eisenberger, which represents SentosaCare, said the company is appealing the class certification.

Paguirigan in 2015 signed a three-year contract to work for Golden Gate with promises that she’d be paid $29 per hour. However, as a condition, she must pay a $25,000 early termination fee, if she leaves the company within the first year of her employment so the company can recover the costs recruitment.

Paguirigan left less than a year later and filed a breach of contract suit against the company, claiming that the SentosaCare paid her less than her employment contract’s agreed-upon pay rate.

But despite the state court’s ruling, SentosaCare has continued to threaten Paguirigan and other foreign nurses with the early termination fee, her lawyer Howley, said.

The company has also filed claims against Paguirigan and two other nurses seeking $250,000 in damages, with unclear motives, court papers indicated.

Howley said that SentosaCare is using the threat of quarter-million-dollar lawsuits to stop SentosaCare nurses from encouraging other nurses to break their contracts.