Duterte’s circus, but without the bread 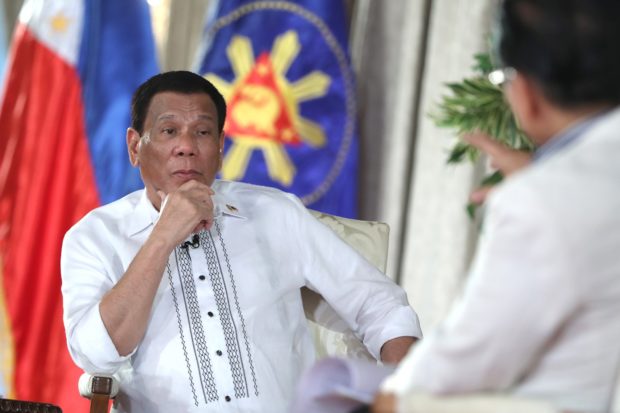 Televised talk between Pres. Rodrigo Duterte and his lawyer, Sal Panelo where he tried to justify his revocation  of his nemesis Sen. Antonio Trillanes’ amnesty. INQUIRER FILE

NEW YORK—The attempt on the part of the Duterte administration to arrest Senator Antonio Trillanes IV, the president’s fiercest critic in the Senate, is a sign of desperation. This is a shameless ploy to shut the senator up by ousting him from his public office—exactly what was done to Senator Leila de Lima, still in detention at Camp Crame on what most observers believe are trumped-up charges.

The move against the senator is the latest in a Duterte campaign to silence his most vociferous critics, the latest example being the removal of Chief Justice of the Supreme Court Maria Lourdes Sereno from her post via a questionable and likely unconstitutional legal basis.

In the dubious tradition of authoritarian leaders, surely and not so slowly the current occupant of Malacañang is remaking the government in his own image: fascistic, anti-poor, and corrupt. And Congress, for the most part, is complicit in this death of democracy by a thousand cuts. The Senate has surprisingly stood behind Trillanes, providing him sanctuary as long as he remains within the Senate, and not allowing the agents of Duterte to enter and arrest him. Or perhaps not surprisingly, as this show of solidarity is as much for the institution’s own good as it is for the besieged senator’s.

And what is the basis for the arrest order? The charge is that Trillanes and his fellow coup plotters allegedly failed to file the proper papers as necessitated by the amnesty given them for their failed coup attempts beginning in 2003. Consequently, so the argument goes, the amnesty granted by Duterte’s predecessor, President Aquino, was not and never was valid ab initio, or from the very beginning.

But the facts are quite clear and irrefutable: the media reported on Presidential Proclamation 75 in 2011, issued by President Aquino, granting amnesty to Trillanes and 77 other military and police officers. There is also quite a bit of documentary evidence proving that those granted amnesty did sign statements acknowledging their role and petitioning for amnesty.

President Duterte has backtracked a bit, by saying Senator Trillanes won’t be arrested until a regional court orders his arrest. For his part, the senator has asked the Supreme Court to rule on the legality of the president’s order.

Here, the U.S. Pinoys for Good Governance (USPGG) issued a statement last week that labels the president’s action “an impeachable offense.” In addition, the USPGG declared that such an action “tramples upon Senator Trillanes’ very basic legal rights and operation of the rule of law: protection against warrantless arrest and against double jeopardy. Duterte’s action is a subversion of the use of his executive powers by thwarting Senator Trillanes’ availing the enjoyment of AMNESTY[sic] granted in the past by President Aquino with the concurrence from both Chambers of the Philippine Congress [emphasis in the original].”

Beyond the clearly illegal strategy employed by an administration that sees nothing wrong in bending the laws to suit their own narrow and anti-democratic agenda is the expectation that this ongoing circus will distract the public’s attention from the stagnant economy, the arbitrary attempt to push for federalism, without the participation of the Senate, and the war on drugs that is both exaggerated in the way the threat is presented and a failure even on its own terms, despite the body count wherein the marginalized have a hugely disproportionate share.

On this last, one need look no further than the investigation into the smuggling of 6.4 billion pesos worth of shabu into Davao City. Davao, of all places! Davao, where the Duterte family reigns supreme, and the president and all of the president’s men and women declare to be a haven from drug-induced crimes!

The drug haul, one of the biggest, if not the biggest in recent times, belies the president’s claim of a successful war against drugs. Among those implicated in the smuggling has been Paolo Duterte, the president’s son—mercilessly grilled by Senator Trillanes in a Senate hearing last year. Not surprisingly, the investigation by the Department of Justice isn’t going anywhere. And the only one who so far will play the fall guy is the lowly caretaker of the warehouse where the drugs were found.

During the last stages of the Roman empire, those in power provided panem et circenses—bread and circuses, the former to appease the citizens’ hunger and the latter, to distract them from the increasing degradation of their own rights, such as gladiatorial combat at the Colosseum.

The would-be Nero in Manila is proving to be a dramatic ringmaster, but where is the bread? Copyright L.H. Francia 2018